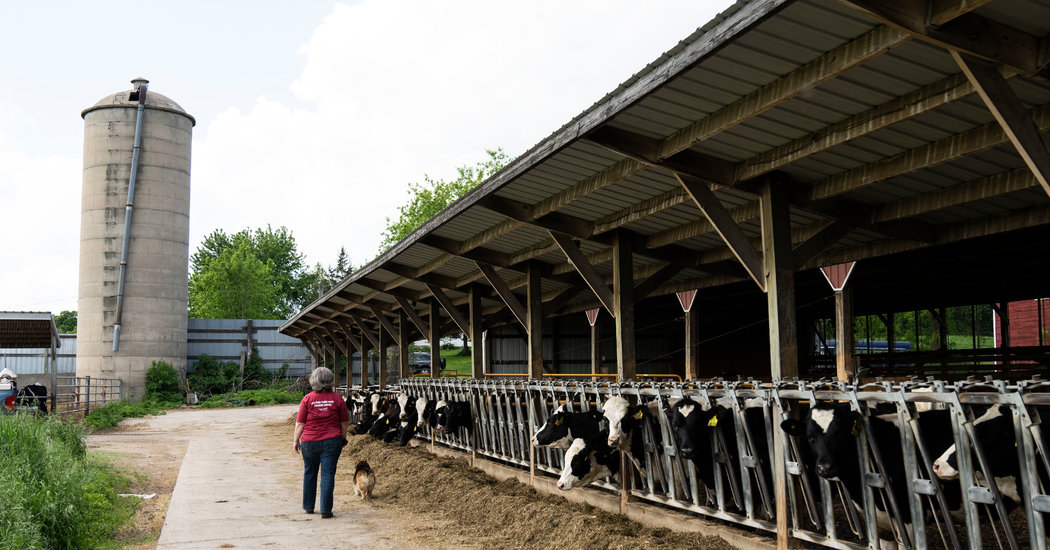 WASHINGTON — Within two years of President Trump taking office, one of his key political constituencies — America’s farmers — were reeling from his trade war with China.

Mr. Trump had waged his fight to try to eliminate the trade deficit with China and bring manufacturing back to the United States. But American farmers — among the country’s largest exporters, and a key part of the president’s political base — soon became collateral damage in that effort.

Soybean, dairy and pig farmers saw their businesses dry up as the world’s most populous nation aimed for Mr. Trump’s weak spot, slapping tariffs on more than $70 billion of American products in retaliation for the president’s decision to tax billions of dollars worth of Chinese goods.

Mr. Trump has vociferously defended his approach, saying that any short-term pain farmers experienced would be worth it once he forced China to rewrite the terms of trade in America’s favor.

But a new book by Mr. Trump’s former national security adviser, John Bolton, alleges that the president, worried about his political fortunes, personally and explicitly asked his Chinese counterpart, Xi Jinping, to help him stay in power by increasing purchases of U.S. agricultural goods.

Those overtures, which Mr. Bolton said occurred in December 2018 and again in June 2019, did little to offset an overall drop in American farm exports to China, which remain depressed at levels last seen a decade ago.

China did ultimately agree to buy $200 billion worth of additional U.S. goods by the end of next year as part of an initial trade deal, including $36.6 billion of American agricultural products this year. But those purchases have so far lagged significantly behind targets, as the Chinese and American economies struggle with decreased demand amid the pandemic.

For soybean farmers in particular, 2020 has so far been a disappointment and has failed to reverse the steep slide in sales that have accompanied the Trump administration.

Soybean exports fell to just $3.1 billion in 2018 from $12.2 billion in 2017, before recovering to $8 billion in 2019. Between January and April of this year exports have been about $1.2 billion, according to data from the U.S. Department of Agriculture.

“It’s going to have to pick up dramatically,” said John Heisdorffer, director of the American Soybean Association, referring to the increase in exports that will be required for China to keep its commitments. “There’s still time yet. But I don’t know if farmers have time.”

If accurate, the revelations in Mr. Bolton’s book highlight the downfalls of Mr. Trump’s aggressive trade approach, including his belief that by simply wielding America’s might, other countries would fold to his demands.

Instead, critics say, China tried to turn Mr. Trump’s desire to secure large purchases for American farmers into a form of leverage, forcing the president to curtail more rigorous demands to reform the Chinese economy and ask a foreign leader to help him politically.

“China has acted from the beginning as if agriculture is vital in influencing the president,” said Derek Scissors, a resident scholar at the American Enterprise Institute.

Many farmers and farm groups are conservative leaning, and they have generally been solid supporters of Mr. Trump, even when his actions threatened their export markets. But in the depths of the trade war — like last August, when China announced it was halting agricultural purchases from the United States and Mr. Trump threatened to tax every Chinese export to America — even the president’s more steadfast supporters began to waiver.

Still, rather than back down, Mr. Trump has spent heavily to shore up the farm economy. The administration announced a total of $28 billion in aid for farmers in 2018 and 2019, funds the president says come from the tariffs levied on China. The administration secured another $23.5 billion to help American farmers through the $2 trillion coronavirus stimulus package passed in March.

There were indications last year that China might have been boosting purchases ahead of pivotal rounds of the trade talks. Last September, traders reported 10 boatloads of soybeans being shipped from the United States to China ahead of negotiations that were scheduled for October. China also stepped up its purchases of American pork that month.

Chad E. Hart, an economist at Iowa State University, said Chinese purchases of American farm goods did pick up around the time of Mr. Trump and Mr. Xi’s meetings — which he called a “standard practice” that Beijing used to “signal momentum” in its discussions.

“It’s something we tend to see from China in any sort of negotiation,” Mr. Hart said.

Veronica Nigh, an economist at the American Farm Bureau, cautioned that fluctuations in the weekly data in any year could stem from a variety of factors — including weather and currency swings — making it difficult to pinpoint whether purchases were the direct result of the Chinese government accommodating Mr. Trump’s wishes.

Overall sales of American farm goods to China remained deeply depressed, dropping from $19.6 billion in 2017 to $9.3 billion in 2018 as the trade war escalated, before picking up to about $14 billion last year.

In addition to the pledge of purchases, the trade deal signed in January contained several provisions opening up Chinese markets for American biotechnology, beef and chicken. But so far this year, American agricultural sales still remain below 2017 levels, though the pandemic has thrown markets into disarray.

The White House has denied Mr. Bolton’s account, though it also sought to block its publication under the argument that it contained classified material.

In an excerpt published by The Wall Street Journal, Mr. Bolton said that the administration’s pre-publication review process had blocked him from printing the president’s exact words in the June 2019 meeting in Osaka when he stressed to Mr. Xi the importance of farmers and increased Chinese purchases of soybeans and wheat in the electoral outcome.

In a Congressional hearing on Wednesday, Robert E. Lighthizer, the United States trade representative, said he was present in that meeting and that the exchange “never happened.”

“I don’t believe it’s true,” Mr. Lighthizer said. “Would I recollect something as crazy as that? Of course I would recollect it.”

It’s clear that Mr. Trump did see China’s agricultural purchases as vital to maintaining support in key swing states, and tried to lean on his personal rapport with Mr. Xi to close such a trade deal. An eye-catching price tag for these purchases was, to Mr. Trump, a central part of the agreement, according to interviews with current and former advisers, and Mr. Trump’s own statements.

In a cabinet meeting in October, Mr. Trump relayed how he had rejected a plan by his advisers to ask China for $20 billion in farm purchases, instead settling on a $50 billion target.

“I said, ‘I want more,’” the president recounted. “They said, ‘The farmers can’t handle it.’ I said, ‘Tell them to buy larger tractors. It’s very simple.’”

Many economists — including Ian Sheldon, an agricultural economist at Ohio State University — said they were highly skeptical that China could actually fulfill those purchasing targets.

Mr. Sheldon said China had only made roughly half as many purchases so far this year as it would need to to be on pace to meet the target, though purchases could swell with harvest season later this year. Still, he pointed to economic research estimating that American farmers lost $14.4 billion in sales through the trade war.

“I think we’re going to be hard pressed to get back to the total before the trade war began,” Mr. Sheldon said.

Michael J. Hicks, an economist at Ball State University, said it would be difficult to recover American farmers’ inroads in China because China had made investments in other soybean markets during the trade war, particularly Brazil.

The weakness of Brazil’s currency, and the recent strength of the U.S. dollar, has only exacerbated that trend. In the years before the trade clash, American and Brazilian farmers roughly split the Chinese market. But Brazil’s share of China’s soybean market rose to 76 percent in 2018 and 65 percent in 2019, while U.S. market share fell below 20 percent, according to data from IHS Markit.

“I think part of that market just cannot come back,” Mr. Hicks said.