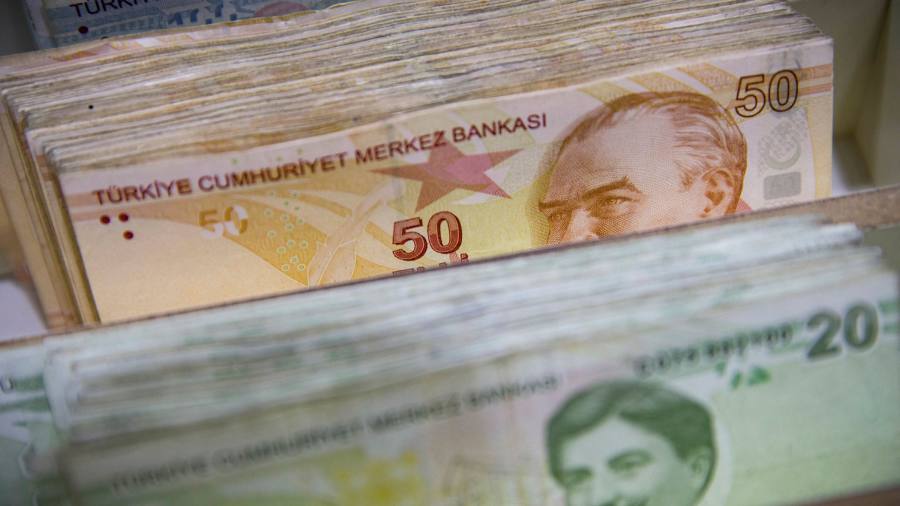 Turkish banks have been banned from performing some foreign-currency trades with UBS, Citibank and BNP Paribas as part of a series of dramatic interventions by the country’s authorities after the lira hit a record low.

The move by the Turkish banking regulator against three major international banks followed a slide in the lira to a low of 7.2685 per US dollar in morning trading in London, reflecting rising investor concern over the country’s economic strength and ability to defend its currency during a turbulent period for global financial markets.

The fall pushed the lira below the previous trough hit during the 2018 currency crisis, which triggered the country’s first recession in a decade. On a day of volatile trading, the currency had strengthened to TL7.1776 by mid-afternoon in London.

Berat Albayrak, Turkey’s finance minister and son-in-law of the president, had sought to reassure investors on Wednesday that the economy would quickly bounce back from the blow dealt by coronavirus.

Turkey’s state media depicted the plunge in the currency as an orchestrated attack organised from London by unnamed foreign banks. The Anadolu news agency reported that regulatory authorities would be launching legal proceedings against the institutions, and said they could face “heavy fines and transaction bans”. The move had echoes of a 2019 threat to investigate JPMorgan for advising clients to short the lira.

On Thursday afternoon, the Turkish banking regulator announced that it was banning the country’s financial institutions from engaging in foreign-currency transactions involving the lira with UBS, Citibank and BNP Paribas.

In a press release, it accused the three banks of failing to meet their Turkish lira liabilities on time. It said that it was taking the measure to protect the rights of savers, to ensure the orderly functioning of the Turkish banking sector, and to protect it from dangerous practices.

UBS, Citibank and BNP Paribas declined to comment immediately on the matter.

The move has heightened suspicions that Turkey might next turn to capital controls in an effort to deflect lira weakness — a prospect that Ankara has explicitly ruled out. “Good luck with convincing the world capital controls are off the table now,” said Paul McNamara, an investment director at the asset manager GAM.

Earlier in the day, Turkey’s authorities published new regulations designed to curb “manipulative and misleading transactions in the financial markets”. These included “trying to benefit from fluctuations or shallow trading in the market” by using tools such as the currency or credit default swaps, and the spreading of “incorrect or misleading” information on financial markets by any mass media tool.

Yaman Akdeniz, a lawyer and academic based at Istanbul’s Bilgi University, said: “In short, they are telling experts — banks, the media or anybody interested in financial issues — not to talk about the financial crisis ongoing in Turkey.”

He said the language in the text was “deliberately left vague” as part of what he described as an attempt to “to control anything related to meaningful discussion about what is happening in Turkey”.

Turkey has faced mounting investor concern over its ability to weather the crisis triggered by the coronavirus pandemic.

Tatha Ghose, analyst at Commerzbank in London, described a “perfect storm” for the Turkish lira.

“The lira is depreciating at an accelerating pace even as Turkish policymakers scramble to find a convincing policy response,” he said, adding that the country’s net foreign currency reserves had “evaporated”.

Those reserves are a key measure of a country’s ability to defend its currency during times of financial tumult such as the one caused by the pandemic.

Mr Albayrak said on Wednesday that the country had adequate FX reserves and strong banks, adding that Ankara was in talks with international central banks about securing swap lines to ease liquidity concerns. Economists and investors have said that reaching an agreement with the Federal Reserve could supply Turkey with badly needed dollars.

But a senior Fed official appeared to brush away that prospect later on Wednesday. Asked about the prospect of extending support to Turkey or other similar countries, he said swap lines were for countries that had a relationship of “mutual trust” with the US and the highest credit standards, according to a Reuters report.