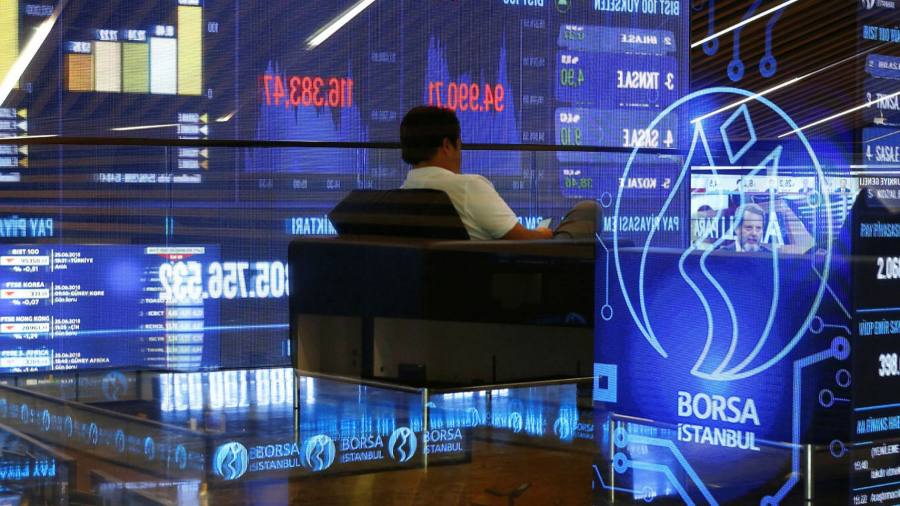 Turkey could be demoted to the status of “frontier” market by one of the world’s most important index providers, after a series of measures by local authorities made it harder for foreign investors to buy and sell assets.

MSCI, whose indices are used as benchmarks by global investors managing trillions of dollars of funds, announced in an annual review this week that it might launch a consultation on revising Turkey’s status as a member of its emerging markets index if conditions were to worsen further.

The process could mean Turkey is reclassified as a frontier market — joining the likes of Vietnam and Morocco — or as a standalone market that does not belong to any index.

Emre Akcakmak, a Dubai-based portfolio manager at the asset manager East Capital, which specialises in EMs, estimated that such a move could lead to about $5bn in total outflows from Turkish equities, including about $2bn to $3bn from passive investment funds that automatically track the index.

Turkey’s weighting in the MSCI index has fallen sharply in recent years, as the depreciation of the lira has seen the value of Turkish stocks fall in dollar terms. Still, Mr Akcakmak said that reclassification as a frontier market would be a “loss of prestige” for Turkey.

“Its place is next to India, South Africa, Indonesia, Thailand — not next to some of the less developed and smaller frontier markets,” he said.

MSCI aims to represent the performance of large and mid-cap stocks from 26 countries in its main EMs index, which Turkey has been a part of since 1989. The index is also used as a benchmark by active investment managers, who commonly operate under rules limiting how far they can stray from its weightings.

At the same time, a surge in the popularity of passive, index-tracking investment vehicles means that increasingly large flows of capital are directly linked to the MSCI index. That gives the benchmark setters a lot of influence.

MSCI said that it was considering placing Turkey under review because access to the country’s equity market had been “adversely impacted” by a series of bans on stock lending and short selling — the practice of betting on share-price falls — that have been imposed in recent months.

Local authorities say that the measures were taken to prevent manipulation in the country’s financial markets. Turkey has been fighting a long-running battle to protect its currency while it has slashed interest rates. It briefly excluded three foreign banks from the market in May, citing technical reasons, and investigated JPMorgan in 2019 over its negative assessment of the lira.

But the interventions have also fuelled an investor exodus. Foreign holdings of Turkish equities stood at $23bn in mid-June, according to central bank data, down from a peak of $82bn in 2013.

The index provider said that recent steps taken by Turkish regulators “severely restrict the ability of institutional investors to express active investment views and hedge portfolio risk”. As a result, it said, it might launch a consultation on reclassification “if the already deteriorating accessibility level of the Turkish equity market were to worsen further.”

Mr Akcakmak said that he would be surprised if MSCI followed through on the threat of recategorising Turkey. “It’s probably more of gentle warning at this stage,” he said. “But never say never.” Further restrictions on foreign investors, or increased capital controls could prompt the index provider to follow through on its warning, he said.

Charles Robertson, chief economist at Renaissance Capital, an investment bank, said a demotion to frontier-market status would be “embarrassing” for Turkey and voiced scepticism about whether it would happen. The country’s importance as an EM has been shrinking anyway, he wrote in a note to clients, as investors “have increasingly steered clear of an unpredictable economy”.

Mr Robertson pointed out that Turkey’s current weighting in the MSCI EM index was about 0.5 per cent — down from its long-term average of about 2 per cent. For an EM fund manager to have exposure to Turkey, say one stock in a portfolio of 50, “requires a large overweight position — which is hard to stomach”, he said. Some frontier market investors already have Turkey exposure, Mr Robertson added.

MSCI also announced that Argentina, which was reinstated as an EM in May last year after 10 years as a frontier market, was at risk of being downgraded again, after a similar “deterioration” in market access. It also placed equity markets in Nigeria, Lebanon and Bangladesh under review, on similar concerns.