Turkish lira succumbs to pressure and weakens past 7 to dollar 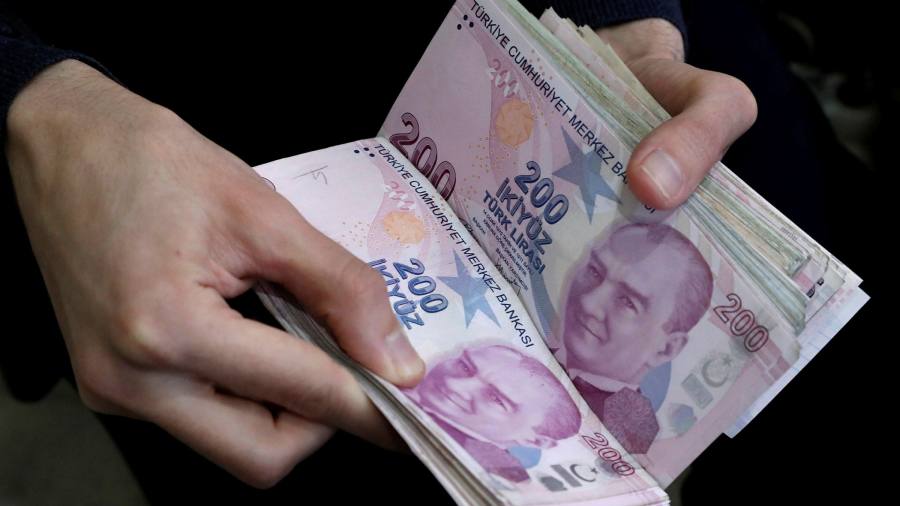 Turkey’s battle to defend its currency against the US dollar has suffered a setback after intense selling pressure pushed the lira to a level last seen in the country’s 2018 currency crisis.

The currency weakened past 7 to the dollar on Friday, after a long stand-off around that level. For more than a week, any shift towards 7 in the exchange rate has been met with dollar selling to prop the lira back up. This time, the dollar broke through to trade as high as TL7.04.

The lira’s slide, on a day of pressure across emerging market currencies, came after Turkey’s central bank governor, Murat Uysal, announced a new, lower inflation forecast during a press conference on Thursday.

The year-end inflation forecast was reduced from 8.2 per cent to 7.4 per cent, while the 2021 inflation projection was unchanged at 5.4 per cent. “From his remarks we understood that the central bank will continue to cut interest rates,” said Enver Erkan, an economist at Istanbul-based Tera Investments.

Economists at Citi said the “outlook is likely to be more challenging” than the central bank’s revised forecasts. Citi expects the 2020 figure to reach 13 per cent, as a result of inflation in the services sector in particular, and as a weaker currency feeds through to higher “cost-push pressures” that lift prices.

Mr Uysal also told reporters that the country was not in talks with the IMF for funding help, despite the strain Covid-19 was putting on Turkey’s public finances.

“Erdogan refuses to ‘bow’ to the IMF, as he calls it, which is very odd because countries that haven’t been near IMF support for years such as Nigeria have all taken the money with very few conditions,” said Charles Robertson, chief economist at Renaissance Capital, an investment bank.

Turkey’s ability to support the lira has become increasingly constrained as the central bank burns through its foreign currency reserves. Economists and investors think the central bank is using up this war chest to defend the supposedly free-floating currency.

Traders report that much of the selling is coming from local state-owned banks operating on the central bank’s behalf. Friday is a national holiday in Turkey, with local markets and banks closed. As a result, low trading volumes made the currency more susceptible to fluctuations.

Nonetheless, one London-based analyst, who asked not to be named, said state banks had continued in their long-running bid to prop up the currency by selling dollars in the open market, offloading as much as $300m by Friday morning in London. “They tried very hard but couldn’t stop it,” said the analyst.

Another investor said traders were reporting more than $500m in dollar sales by local state banks.