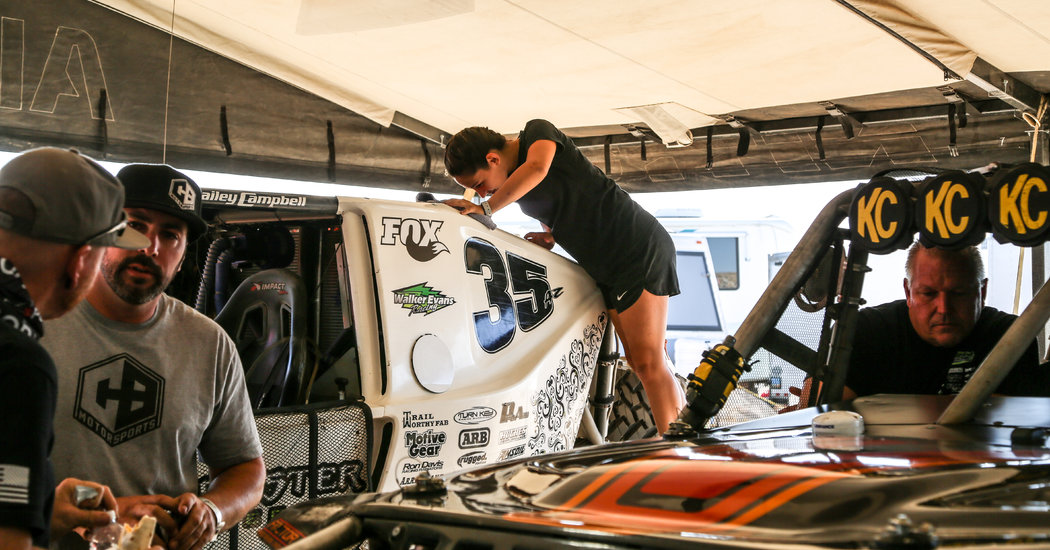 Sue Mead wasn’t always a hall-of-fame automotive journalist. She started her career, in fact, as a floral designer before stints in the mental health care field.

Ms. Mead got her foot in the door covering news for local and regional outlets, as well as The Associated Press. In 1982, she started as a “shooter” photographer who worked on feature stories and news writing, but a brush with death, because of an autoimmune illness, convinced her she had to switch things up and see the world.

She has done that, and then some.

Bailey Campbell, on the other hand, comes from a family of off-road racers. What were off-pavement adventures as a kid turned into a career with major race wins — at just 23.

In 1996, with the stench of mud baked on hot car parts wafting into the air, spectators and competitors were eagerly awaiting the start of the Baja 1000 — a brutal annual race in Mexico’s Baja Peninsula. With her own days as an off-road racer ahead of her, Ms. Mead was there, not only to cover it but to race as the co-driver to an off-road legend.

In his half-century career, Rod Hall competed in 50 consecutive Baja 1000s and notched 25 class wins. Ms. Mead knew Mr. Hall from his reputation. She wanted to learn off-road desert racing and asked her four-wheel-drive mentor, Mark A. Smith, a friend of Mr. Hall’s, for an introduction.

“There were very few females in this world at that time,” Ms. Mead said. “I started on the first team that included women and stuck with it.”

That was a team for the 1995 Camel Trophy, one of the most difficult four-wheel-drive expeditions and competitions in the world. Ms. Mead was a participating journalist in ’95, the same year that Daphne Greene was a competitor from the United States. Beginning in the mid-1980s, it was also called the Olympics of four-wheel drive.

In an industry once dominated by men, Ms. Mead has been fortunate, she said, while noting “rare occasions of sexism.”

“The automotive journalist industry actually stands out to the good in that way,” she added. “Men have not only been my friends in the industry but have put me on their shoulders and carried me forward with training and support through most of my years in the business.”

In the quarter-century since just a few women raced in the Baja 1000, the roster of female drivers, co-drivers and co-riders has grown considerably.

Ms. Mead is now known for her expertise in extreme four-wheeling and off-road racing, but on that day in 1996, she had never raced in the desert, let alone in a race considered one of the sport’s most brutal.

Early in the race, her excitement gave way to anguish as their Hummer H1 hit large sections of long, unevenly spaced bumps, known as “whoops.” It was very painful. “Who in their right mind,” she said, “would think this was fun?”

Quickly, Ms. Mead figured that this would be her one and only desert race. But when the Hummer found smoother ground, she witnessed a magical sunrise over the ocean. It all clicked, and she understood what draws racers to Baja.

It didn’t hurt that she and Mr. Hall, who died in 2019, crossed the finish line first in their class, while she learned his perseverance and his driving techniques.

It was an experience that helped set her on her journalistic path.

As a child, she didn’t watch much TV but read National Geographic. “Never did I think I’d see the elephants in the world,” she said.

“Imagine my heart when, in 2000, I was racing across Africa and I felt like I was flipping through the pages of National Geographic! Seeing things I had grown up seeing as a young girl and longed to see in person, but never dreamed I would,” she said.

This motivated her to continue her career in journalism and racing, aiming to see the world while paying her bills.

While Ms. Mead has cemented her legacy, she is also mentoring women in the industry, including this reporter. A simple meeting during an off-road camp trip for Toyota has become a lasting friendship. She has supported my journalism ventures, and she has taught me off-road driving tips and tricks. Her encouragement helped me to compete in the women-only Rebelle Rally as well as the Alcan 5000 Rally.

Some careers take some twists. Others seem like destiny.

Bailey Campbell’s father, uncle and brother are all off-road racers. Ms. Campbell, who lives in Gilbert, Ariz., graduated from high school in 2015 and went to college for a few semesters but decided to take time off to figure out what she wanted to do in life.

“Well, I’m sure you can guess what happened next,” she said. “I didn’t go back.” She has been working full time at the family auto shop, Campbell Enterprises. “Growing up, I was around a variety of racing that all included dirt,” she said.

“Never in my wildest dreams did I think I’d be making broad steps into an off-road community alongside my dad, Shannon, and my brother, Wayland,” she added. “I don’t think they did, either.”

Her entry into competitive motorsports came in high school. Her father asked if she wanted to enter a rock-crawling competition. Yes, she said: “My addiction began for loud cars and the speed beneath the gas pedal.”

Father, daughter and son would head out to Florence, Ariz., known for its rock trails, and they would “drive wherever we wanted,” she said. Those experiences quickly led them to their first competitions in 2012 and 2013.

Within a few short years, Ms. Campbell had racked up several racing and rally achievements, including two Hard Charger awards (qualifying for the pole position at an Ultra4 series race), a third-place finish at the 2019 West Coast Ultra4 Championship and the first top-five finish for a woman at the grueling King of the Hammers Ultra4 West Coast race in Johnson Valley, Calif.

“Even though I’m in a male-dominated sport, they don’t treat me any differently,” she said. One of her hardest challenges is that she’s small and can’t do everything by herself.

“I’m very hardheaded and prefer to do things on my own, but sometimes when it comes to working on the cars or even changing a tire, I don’t quite have the strength to take the task on myself,” she said.

Ms. Mead and Ms. Campbell attribute their successes to their enthusiasm and willingness to learn, and to those who surround them — especially men.

“That is the central nub that all of this stems from,” Ms. Mead said. “It’s not been as much about the vehicle for me. It’s been more about the adventure with the vehicle.” This has become the literal and metaphorical way that she sees the world.

“The hopes and dreams of my childhood came to be from the gift of being sick,” she said of the episode that inspired her wanderlust. To Ms. Mead, the greatest excitement is the places vehicles take her; to date, it is 71 countries.

For Ms. Campbell, the end goals are different, but cars will get her there. “There are automotive opportunities everywhere in this world — they’re all so very different,” she said. “With the seat time I have under my belt, I’d love to take it to a totally different level as a stunt person for commercials, movies.”

For all her time behind the wheel, Ms. Mead said, she has felt like an expert only in the last decade. For a long time, she said, she was more focused on the adventure. Now she reviews vehicles with an eye on how they have changed the industry.

But competing in dozens of big-time races like the grueling Camel Trophy, the Paris-Dakar Rally, the Mexican 1000, the Rallye Aicha des Gazelles in Morocco and the notable Baja 1000 several times shaped Ms. Mead into who she is today.

She has been a co-driver for three of the top off-road racers in the world: Mr. Hall, Darren Skilton and Robby Gordon. She got there by asking lots of questions, learning quickly what she didn’t know and pairing herself with the people who did.

Both Ms. Mead and Ms. Campbell agree: If other women are aspiring to get into the automotive industry, don’t be discouraged by the male atmosphere. It’s important to be yourself and jump right in.

“You’re just as good as they are, so show them!” Ms. Campbell said with a smile. “You never know if it’s for you unless you try.”