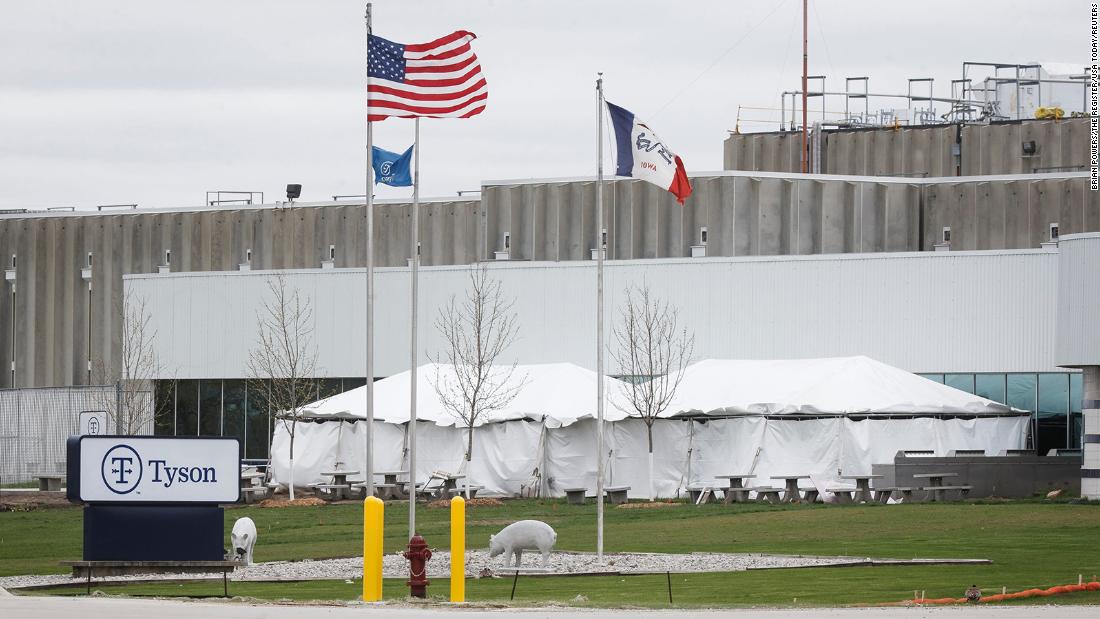 The plant reopened on May 7. The Tyson employee who died Monday was diagnosed with coronavirus in April, according to a friend and a family member.

“We are deeply saddened by the loss of any Tyson team member and are keeping the family in our thoughts and prayers at this difficult time,” a Tyson spokesperson told CNN Business via email Tuesday.

The Tyson employee who died has been identified as Jose Ayala, 44, according to his bother, Art Hernandez, and Zach Medhaug, who says he was Ayala’s friend and co-worker at the Tyson plant.

Medhaug, who told CNN Business he too was diagnosed with Covid-19 in late April, has been chronicling the Tyson Waterloo plant’s Covid-19 outbreak on Facebook and providing updates on Ayala’s condition since March.

“I was with him in his final moments,” Medhaug said of Ayala on Tuesday. “You don’t think you’re going to go to work and see your friend and less than a week later, he’s going to be on a ventilator — and a couple months later, you’re going to be holding his hands in his last minutes.”

Hernandez said his brother was a “homebody” and an avid gamer who loved “Diablo” and “Call of Duty.”

“He was very down-to-earth,” Hernandez said. “He would help out a lot of people and never expected anything in return.”

Medhaug said he and Ayala became friends shortly after Ayala moved to Waterloo from Laredo, Texas, six years ago to work at the Tyson plant, where Medhaug has also worked for the past 11 years. His loved ones said Ayala had three siblings and a large extended family.

“Jose is a good man,” Medhaug wrote in a Facebook post. “He is an amazing friend. He could always make everyone in the room smile. He would do anything for anyone.”

Medhaug said he himself suffered from minor symptoms before a doctor diagnosed him with Covid-19 on April 20, but Ayala had suffered from labored breathing, fever, exhaustion and a cough since late March.

Ayala wasn’t tested until after he was put on a medical ventilator on April 12, according to Medhaug and Hernandez.

“At that point he had moved to a high-risk status,” Medhaug said of Ayala. “Since they needed to move him on a ventilator, they needed to know what they were treating him for, so he was tested.”

Medhaug said he is convinced he and his friend caught the virus at work. “There’s no where else we could have got sick from,” he said.

Tyson did not immediately respond to a request for confirmation that Medhaug and Ayala were infected on the job.

In an earlier email, the company said the health and safety of its team members is its top priority.

“We take this responsibility very seriously, and we have put in place a host of protective steps at our facilities that meet or exceed CDC and OSHA guidance for preventing COVID-19,” the company said.