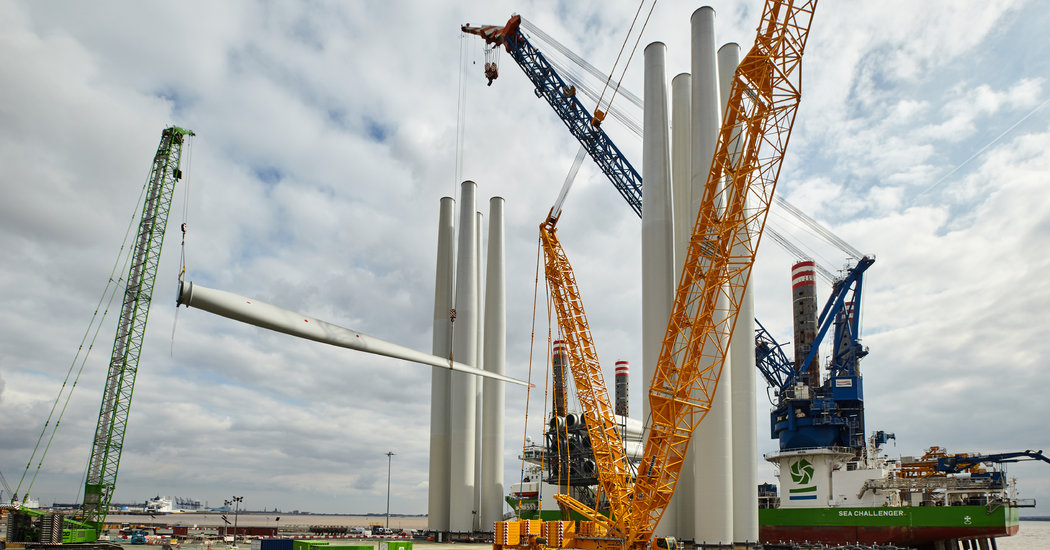 HULL, England — At first glance, the workers appeared to be practicing for a circus act. In a cavernous space, they took turns gingerly climbing a ladder to a narrow platform about 30 feet above the concrete floor. Then they stepped off — suspended by harnesses, and were slowly lowered back down.

“This is part of the interview process,” said Dan Lead, the administrator of the training center.

The climbers were potential recruits for jobs in the offshore wind business, which employs about 13,000 people in Britain. Part of the goal at the center, which is run by Siemens Gamesa Renewable Energy, is to quickly winnow out those who are anxious about heights. Those who make the grade are likely to find themselves working hundreds of feet above the North Sea, atop swaying wind turbines.

Fly above coastal Britain, and chances are you will see these turbines — rows of white pinwheels turning slowly just offshore. Britain tops the world in electricity generated by offshore wind farms, and their output accounts for about 11 percent of the country’s electricity.

The turbines helped Britain pass a milestone: In 2019, more electricity was generated from sources like wind and solar and nuclear power that produce no carbon-dioxide emissions than from carbon-emitting fuels like natural gas and coal.

In fact, over the last three decades, according to figures collected by the World Resources Institute, a Washington-based nonprofit group that tracks climate change, Britain has reduced carbon dioxide generated in the country by about 40 percent, more than any other major industrialized country. (Emissions in the United States rose by about 3 percent over that period; in China, which saw huge economic expansion, emissions grew nearly 400 percent.)

All of that happened before the coronavirus slammed Britain and the rest of the world. In the short run, the economic contraction caused by the virus and efforts to contain it will push emissions down sharply, analysts say. In April, for instance, demand in Britain for electric power, still a large emitter, had dipped 15 percent, according to Ember, a nonprofit that advocates the phaseout of coal. For much of this time, the use of coal, a major source of emissions, has dropped to zero, crowded out by clean energy like wind and solar. Road traffic, another major source of emissions, has also fallen sharply.

Analysts say one crucial question is whether a public battered by the fallout from the pandemic will retain its enthusiasm for tackling climate change. In the longer run, the British government may put further funds into renewable technologies as part of an effort to spark an economic recovery once the pandemic fades. Rishi Sunak, the chancellor of the Exchequer, said at a news conference on May 29 that offshore wind was one of the areas he might favor for such a program.

The boom in turbines can largely be traced to the Climate Change Act of 2008, a piece of legislation adopted in Parliament with broad political support. It set in motion a series of regulatory guideposts that the country would be legally required to follow over the coming decades to reduce the greenhouse gas emissions responsible for climate change.

To say the legislation helped change the British economic landscape would be an understatement, and more than a decade later there are clearly defined winners and losers. The wind turbine industry is in the first category; the industry has been rapidly hiring and building new machines, and the British government expects offshore wind capacity to triple over the next 10 years.

Among the losers, the steel-making industry has been crippled, and Britain’s coal miners are all but out of business.

“Many countries could learn a lot from the U.K.,” said Kelly Levin, a senior associate at the World Resources Institute. Britain has managed to make significant cuts in its greenhouse gas output while still maintaining a relatively strong economy, she said.

Few climate-change activists, however, are ready to hand Britain a gold medal. In a world torn by fires, flooding and rising temperatures, a growing chorus says the improvements are not coming fast enough. An aging economy, where finance and the service industry long ago replaced manufacturing and mining as fundamental drivers, has helped the statistics. Indeed, Britain’s share of the world economic growth has fallen over this period.

Doug Parr, chief scientist of Greenpeace UK, gave the government credit for closing down coal and kick-starting offshore wind, but said it was doing too little to promote public transportation and make houses and buildings more efficient. Britain, he said, “has done more than other countries but nowhere near enough.”

The Climate Change Act initially required emissions to be slashed by 80 percent by 2050, using 1990 as a baseline. Last summer, the goal was raised: zero net emissions by midcentury. The climate law also created a watchdog panel called the Committee on Climate Change, a group of experts that advises the government on targets and barks when it thinks politicians are not doing enough to meet them.

The law has also inspired a spending spree — estimated at 50 billion pounds, or about $61 billion, according to Jonathan Marshall, head of analysis at the Energy and Climate Intelligence Unit, a research organization — that has helped bring down the costs of clean-energy technologies like offshore wind so they can now largely stand on their own. The funding, in the form of guaranteed prices for the power generated, has encouraged developers like Orsted, the Danish renewable-energy company, to make investments that can run into billions of dollars for offshore wind farms.

The biggest steps to reduce emissions have come from the electric power industry, which now accounts for around 16 percent of total carbon dioxide emissions. In 1990, 75 percent of Britain’s electricity was generated by burning the dirtiest fuels: coal, oil and diesel. Change came quickly. Within the next decade, technological advances and regulatory shifts encouraged utilities to build a fleet of cleaner, natural gas-fired plants.

On the other side of the ledger, Britain’s steel-making capacity has declined by more than half over the last two decades, with jobs in the industry falling by more than 40 percent.

Steel mills use a great deal of energy, and while there are many reasons for their decline, manufacturers say they are hurt by having to buy electricity at substantially higher rates than their competitors in Europe, partly because of taxes designed curb emissions.

The government has also made war on coal through taxes on carbon and other measures. By last year, only about 2 percent of Britain’s power came from coal, which seems headed for extinction. The government plans to phase coal out completely by late 2024.

The benefits of these changes are seen in Hull, a venerable North Sea port in northeast England that had taken a battering from the decline of fishing and other industries. City officials said the Siemens wind facilities had served as a foundation for an emerging cluster of environment- and climate-related businesses.

“The growth of the green economy has been able to replace a lot of that,” said Martin Budd, environment and climate change strategic adviser to the City Council. Unemployment in the city of 260,000 had fallen by about half over the last six years to about 6 percentas of last fall.

Looking ahead, cutting emissions from power plants is likely to prove the easy part of the progression toward a cleaner economy, because changing the source of electricity usually does not force residents to change their lifestyles.

The next stage “will be much deeper and more complicated than the first stage,” said Nick Mabey, a former government adviser and chief executive of E3G, an environmental group.

The Committee on Climate Change has published a list of steps it wants the government to take that may be more disruptive. The group scored a win on Feb. 4 when the government of Prime Minister Boris Johnson announced that it would advance the planned ban on sales of new gasoline- and diesel-powered cars to 2035, from 2040.

The committee also aims to largely wean Britain off natural gas, which heats most of its homes, replacing it with electric-powered heating or, perhaps, hydrogen.

Having requirements to cut emissions on the books helps focus minds, policymakers say. “That legal framework enabled me to develop other policies that then delivered on the climate change targets,” said Edward Davey, who backed offshore wind and other renewable energy as Britain’s secretary of state for energy and climate change.

Mr. Davey, who is now the acting leader of the Liberal Democrat party, helped bring in investors like Siemens Gamesa, the world’s largest offshore turbine maker. Siemens has already invested £310 million with a partner, Associated British Ports, in the training center, a factory for making blades and docks for the boats that take the components out to the wind farms.

Britain has been hit hard by the coronavirus pandemic, but these facilities have largely remained open with numerous changes including thermal imaging checks at entrances and markings on the floor to establish what are deemed safer distances between workers.

Clark MacFarlane, the Siemens Gamesa managing director for Britain, said that when the company was hiring 800 people for the new blade factory it received more than 20,000 applications. Their skills were high, he said, but their “enthusiasm was even higher.”

One of those who joined in the last few years was Nick Aram, a former aircraft technician, who now clambers down from helicopters to fix turbines that have stopped.

He likes to think that the repairs he makes cut the need for coal.

“The more we have these things running, the less coal they are burning,” he said.