‘Undercounting the Economic Pain’ Even as Jobless Ranks Soar 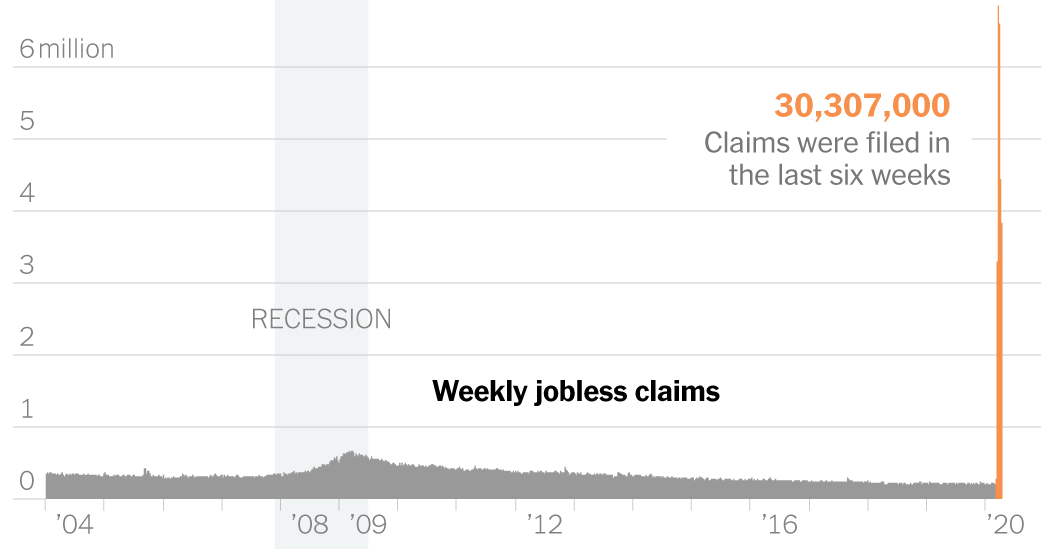 Despite trillions in stimulus spending and a rush to reopen shuttered businesses in some states, the American economy continues to stagger under the weight of the coronavirus pandemic, with another 3.8 million workers filing for unemployment benefits last week.

The figures announced Thursday by the Labor Department bring the number of workers joining the official jobless ranks in the last six weeks to more than 30 million, and underscore just how dire economic conditions remain.

Many state agencies are still overwhelmed by the flood of claims, leaving perhaps millions with dwindling resources to pay the rent or put food on the table.

They include Lauren Standifur, who lost her front-desk job at a hotel in Lexington, Ky. She says she has been unable to get through to state agencies for weeks and has collected no benefits.

“My whole call log is filled,” she said. “It’s close to 40 hours a week — if I got paid for making calls, I could do it as a full-time job. But I haven’t talked to a single human being.”

If anything, according to many economists, the job losses may be far worse than government tallies indicate.

A study by the Economic Policy Institute found that roughly 50 percent more people than counted as filing claims in a recent four-week period may have qualified for benefits but were stymied in applying or didn’t even try because the process was too formidable.

“The problem is even bigger than the data suggest,” said Elise Gould, a senior economist with the institute, a left-leaning research group. “We’re undercounting the economic pain.”

Others have reached similar conclusions. Alexander Bick of Arizona State University and Adam Blandin of Virginia Commonwealth University found that 42 percent of those working in February had lost their jobs or suffered a reduction in earnings. By April 18, they found, up to eight million workers were unemployed but not reflected in the weekly claims data.

The difficulties at the state level largely flow from the sheer volume of claims, which few agencies were prepared to handle. Many were burdened by aging computer systems that were hard to reconfigure for new federal guidelines.

“We’ve known that the state unemployment insurance systems were not up to the task, yet those investments were not made,” Ms. Gould said. “The result is that the state systems are buckling under the weight of these claims.”

The crush of claims is a major reason — but not the only one — that states are backlogged. Frustrated applicants who refile their applications, some as many as 20 times, slow the system as processors weed out duplicates.

Some applications are missing information. New York analyzed a million claims and found many had been delayed because of a missing employer identification number. In such cases, each applicant has to be called back. Callers looking for updates also flood the system, increasing the wait for those who need to correct a mistake.

The number of people filing initial unemployment claims is down from late March and early April, when more than six million people applied for benefits two weeks in a row. But that’s a small consolation in light of the larger economic picture, economists said. Before the pandemic, just over 200,000 people a week applied for new unemployment benefits.

“It is declining, but the level is still breathtakingly high,” said Ian Shepherdson, chief economist at Pantheon Macroeconomics. “Claims could stay in the millions for several more weeks, which is almost unfathomable.”

Mr. Shepherdson said job cuts now extended far beyond the industries initially hit by the pandemic and the ensuing lockdown in most states, like leisure and hospitality.

“You can’t close a bar twice,” he said. “Layoffs are now working their way through management and supply chains and business services.”

Millions who have managed to keep their jobs face salary cuts or furloughs, a sign of employers’ uncertainty. Given the trillions spent, “we would have hoped that federal efforts would have been more effective at stemming job losses,” said Michael Gapen, chief U.S. economist at Barclays.

Mr. Gapen said he expected the unemployment rate to hit 19.5 percent in April, heightening the financial pressure on him and his wife, a level unseen since the Depression.

According to the Labor Department, all 50 states are paying the $600 weekly supplement, but only 21 have begun benefits under the program for independent contractors, and only nine have started the 13-week extended payments.

New Jersey has struggled to answer phone calls from filers like David Schoonover, an actor from Jersey City who first applied for benefits on March 23 after his show in New York City closed. All seemed normal at the beginning, but his case was marked pending week after week when he checked online.

Unable to get through by phone, he searched for email addresses for officials from the New Jersey Department of Labor and Workforce Development and sent them messages. One responded, and his claim status switched this week to filed from pending. The department scheduled a call with him on June 3, and Mr. Schoonover said there was little he could do to expedite the process, heightening the financial pressure on him and his wife.

“Every week or so we get the calculator out and ask how much longer we can go if we don’t get unemployment benefits by June,” Mr. Schoonover, 37, said. “We’re pinching every penny.”

New York has had fewer problems than some states, but the volume of applicants is “simply heartbreaking,” Roberta Reardon, New York’s labor commissioner, said in a call Wednesday with news organizations.

The state is calling back everyone who has a problem with an application, she said.

New York has started processing claims from gig workers and freelancers, but one of those, Seth Flicker of Brooklyn, hasn’t had any luck.

“Not a phone call nor an email, nothing,” said Mr. Flicker, 52, who applied in mid-March after his work as a handyman came to a halt. “We are stuck with absolutely nowhere to turn,” he said, calling his situation “a Dante-esque limbo.”

Mr. Flicker was able to delay paying his electric bill without a penalty and sent a check to the phone company, but he is worried about covering May’s rent. “I haven’t figured it out yet,” he said. “It’s nerve-racking.”

In Kentucky, where roughly a quarter of the work force is out of a job, unemployed workers have faced waits of six hours or more when calling about benefits.

One of those frustrated is Ms. Standifur, who had recently begun working at the front desk of a hotel in Lexington when she was furloughed on March 13. She says she immediately applied for benefits, only to be asked to check her status in two weeks.

When she did, she was told to come back in early April. Her online profile with the Kentucky unemployment agency lists an expected $291 weekly payment from the state and a weekly $600 federal stimulus payment. But nearly seven weeks after filing, she says, she has received nothing.

Ms. Standifur, 30, says she calls various government numbers every day, including the governor’s office. But the call volume is always too high, or a recording says the number is faulty, or she hits a busy signal. On Tuesday, she started calling at 6:34 a.m.

Ms. Standifur, who lives with her mother and three nephews, said she had applied for odd jobs and had used her credit card to its limit to buy food, settling for meals like peanut-butter-and-jelly sandwiches.

“I’m trying everything I can to get some money in so that when this is all over, we don’t have all these bills stacked up,” she said. “Every day we go to bed and pray that it gets better. But every day, it feels like it’s getting worse.”