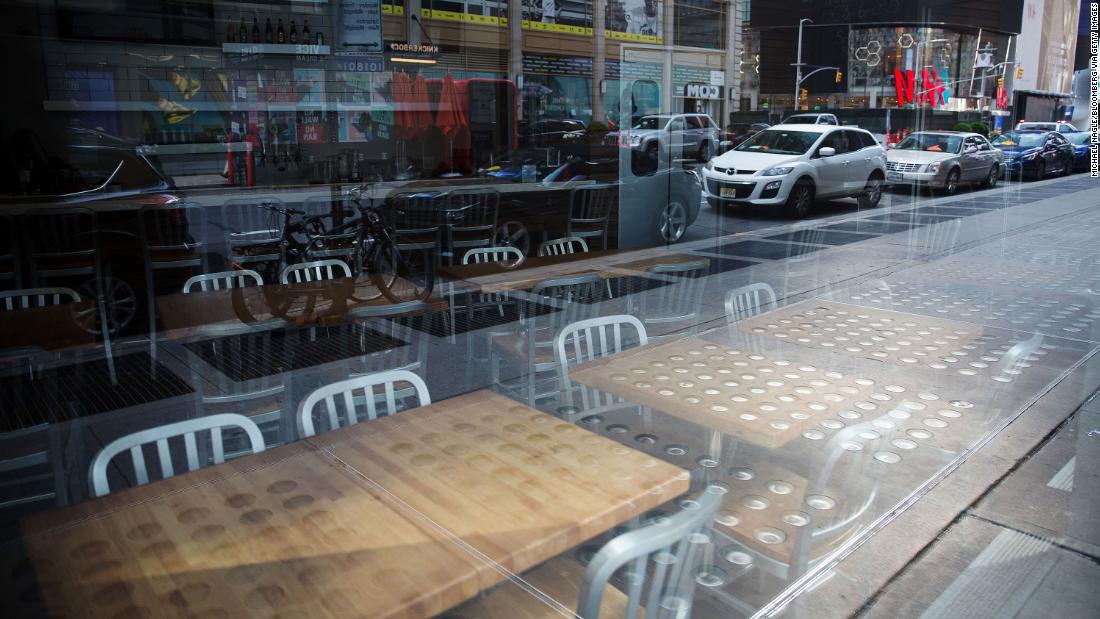 First-time claims for unemployment benefits totaled 4.4 million in the week ending April 18, after factoring in seasonal adjustments, the US Department of Labor said.

Without those adjustments — which economists use to account for seasonal hiring fluctuations — the raw number was 4.3 million.

No matter how you look at the data, the last five weeks have marked the most sudden surge in jobless claims since the Department of Labor started tracking the data in 1967. American workers filed 26.5 million initial claims since March 14, according to the seasonally adjusted numbers.

Not all of those claims will result in benefits being paid. Some will be rejected because workers did not meet eligibility requirements. Even so, numbers at that level reflect a devastating blow to workers, indicating roughly 16.2% of the US labor force is suffering from layoffs, furloughs or reduced hours during the coronavirus pandemic.

Weekly claims numbers have come down over the past three weeks, falling from a peak of 6.9 million in the last week in March. Even so, claims continue in the millions every week — a stark contrast to the pre-pandemic strength in the job market. Just a couple months ago, weekly claims were hovering in the low 200,000s. That puts recent weekly claims north of 20 times the pre-coronavirus level, and more than five-times of the worst five-week stretch during the 2007-2009 financial crisis, according to Heidi Shierholz, senior economist at the Economic Policy Institute.

And even though the declines from week to week are somewhat encouraging, the data shows that much of the damage is already done, said Paul Ashworth, chief US economist at Capital Economics. Case in point, the seasonally adjusted insured unemployment rate sat at 11% in the week ending April 11 — the highest level recorded in the series, according to the DOL.

Continued jobless claims, representing workers who filed for their second week of benefits or more, stood at nearly 16 million in the week ended April 11, after seasonal adjustments, up from 11.9 million in the prior week.

Early studies have shown lower-income workers are particularly affected by job losses, and minorities, specifically black and Hispanic families, are expected to bear the brunt of the economic cost of this crisis.

Meanwhile, states continue to struggle to process the overwhelming volume of unemployment claims.

In Hawaii, where much of the economy is tourism-based, roughly 26% of the March labor force has filed for first-time benefits over the past five weeks. In Kentucky and Michigan, some 24% of workers have filed for initial claims.

New York Gov. Andrew Cuomo told reporters Tuesday that his state had 1,000 people “just to take the incoming unemployment calls. That’s how high the volume is. And they still can’t keep up.”

And Florida’s state unemployment agency said on Tuesday that it had only paid a paltry 14% of the claims filed since March 15 — among the slowest in the country, according to an Associated Press analysis.

Just over a quarter of Florida’s claims were rejected because filers were found ineligible for the regular jobless benefits program. However, some may still qualify under a new pandemic unemployment assistance program that Congress created in the $2 trillion relief package last month.

Lawmakers temporarily extended the unemployment program to independent contractors, the self-employed, gig workers and those affected by the coronavirus — and states have scrambled to update their computer systems to process those new types of claims.

— Tami Luhby and Annalyn Kurtz contributed to this article.