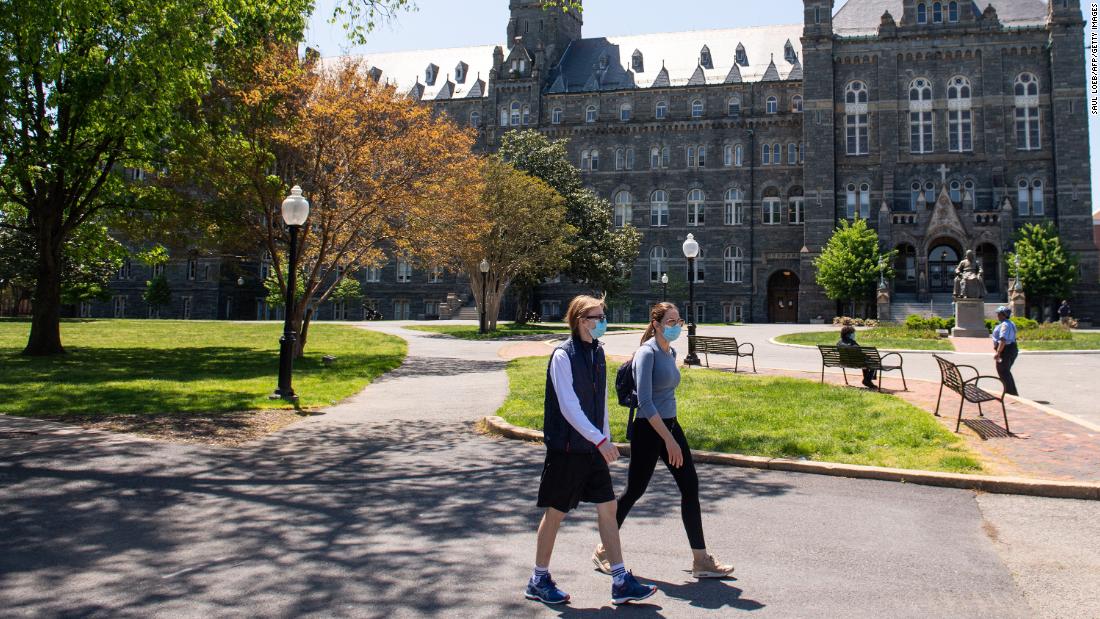 “We rely on the student population coming in to stay open, so it was important to do everything we can to make sure our students are and feel safe,” said Queen’s Grant High School principal Josh Swartzlander, who said the school will also require students and teachers to wear protective gear. “We enrolled 20 new students right after we made the announcement.”

The usage of UV lights, which have been shown to eliminate Covid-19, made headlines in May after New York City deployed portable light devices on its subway lines as part of a massive cleaning effort.

With the last school year upended by the pandemic and the start of the next school year months away, educators are weighing what they can do to safely welcome students back to classrooms. Some schools like Queen’s Grant High School are embracing bold — and sometimes controversial — technologies to help cut down on exposure to and spread of coronavirus. The methods range from trackable student IDs and “exposure alert” apps to UV lights and thermal cameras that automatically perform temperature checks.

These efforts come as some states with newly loosened lockdown restrictions are reporting a surge in coronavirus cases over the past few weeks. Although some institutions, including California State University’s 23 locations, have announced plans to stick with virtual learning until further notice, many schools continue to push forward with plans to reopen physical classrooms.

“There is a risk and reward with reopening the campus — some say it’s not worth it and remote learning is still the way to go, but there are clear benefits to being on campus,” said Robert Robbins, president of University of Arizona, which will be welcoming students back in the fall. “However, our semester is not going to look the same. We have a responsibility to protect the health of everyone on campus.”

The University of Arizona recently announced it will roll out a specially-developed “exposure alert” app, which tracks and alerts users if they’ve been in close proximity to someone who’s tested positive for the virus. But in what may be a sign of the difficult balancing act, it won’t require students to use the app over privacy concerns — even though that could make it harder for the school to achieve the strong adoption rate needed for the app to truly succeed.

Whether a student is headed to class, a party or the gym, the app uses Bluetooth technology to recognize when someone else is nearby. If that student later tests positive for the virus, they’ll need to anonymously log their results within the app, with proof from a medical provider, and anyone who’s been exposed and has also downloaded the app will be notified.

The app — built by Covid Watch, an organization made up of public health experts, researchers and developers — was developed using Apple and Google’s newly-launched contact tracing platform. Unlike other contact tracing apps, the tech companies’ joint effort does not collect location data, so the University of Arizona’s app will assigns users a random number to keep identities concealed.

This means alerted students won’t know where they were exposed, but they’ll see the date and approximate duration of the exposure.

“People are always going to be suspicious of their privacy … but we hope keeping everything anonymous will entice more people to use the app,” said Robbins.

The University of Alabama is also working on a similar Bluetooth-based Covid-tracking app in collaboration with the Alabama Department of Health, according to Alabama news site AL.com. In an op-ed published by the New York Times, University of Notre Dame president Reverend John Jenkins said it would also incorporate contract tracing into its back-to-school protocols but didn’t elaborate on whether it would be part of an app.
According to a recent study conducted by Johns Hopkins University, about 60% of respondents said they would anonymously share their positive Covid-19 test result via a contact tracking app.

At the same time, some critics argue schools should exercise caution when rolling out contact tracing-like technology, even if the intention is to keep students and faculty safe and healthy.

“There are tried and true methods of contact tracing where medical professionals are directly involved … but anonymized data can be used in unexpected or abusive ways,” as it’s possible to de-anonymize it, said Evan Greer, deputy director of digital rights nonprofit Fight for the Future.

However, anonymized Bluetooth methods are different and less invasive than location tracking using GPS data, which could allow an institution — or anyone who gains access to the system — to monitor the real-time movements of students, faculty, and community members, and learn intimate details about a person, such as how often they go to the bathroom, who their friends are and their political associations, according to Greer.

This type of surveillance is picking up in the corporate world to confront the health crisis, too. Car manufacturer Ford has given its employees Bluetooth wristbands that buzz when standing too close to someone else, and consulting firm PricewaterhouseCoopers is testing a phone tracking app at its Shanghai office that knows how far apart people are in the office. Some companies are even using thermal cameras that automatically check for elevated body temperatures. However, the World Health Organization states on its website thermal cameras may be effective in detecting if someone has a fever but they cannot screen for Covid-19.

“All forms of technologically enhanced contact tracing should be voluntary,” Greer said. “There are significant civil rights and civil liberties concerns with employers requiring employees to wear trackers or be subjected to other forms of invasive surveillance in order to have a job.”

The fear is that these efforts can gradually shift away from their original use cases to other forms of monitoring, such as keeping an eye on employee productivity. “Workplace surveillance like this would likely exacerbate existing forms of on-the-job discrimination,” Greer said.

It’s not just tech giants building these tools now. Corporate badge tracking company RightCrowd has developed identification cards for students and teachers that flash if someone is standing within six feet of someone. Identity management firm Identigy has created special holders for student ID cards that work alongside beacons — small wireless transmitters that use Bluetooth — to know when someone walks through certain doorways or halls. The data could reveal which students were close to someone who later tested positive for the virus. Both companies said they’re in talks with colleges to roll out the features.

“One hundred percent of the schools we’re working with are concerned about preserving the college culture, and we are too,” said Mat Birnbaum, general manager of Identigy. “A student would use their ID card just like they’ve done in the past, so it will be a passive experience — not one like Big Brother.”

In Beijing, some schools are using wearable bracelets to monitor the body temperatures of its students and that data is stored in a corresponding app. Meanwhile, students in Taiwan have built robots out of Legos that spray sanitizer into hands.

“We’ve decided to take an any-and-all-means-necessary approach to keeping our students and faculty healthy on campus,” said principal Swartzlander whose charter school is using the UV lights. “Lights in the vents may look strange, but we’re open to most things to keep our community safe.”