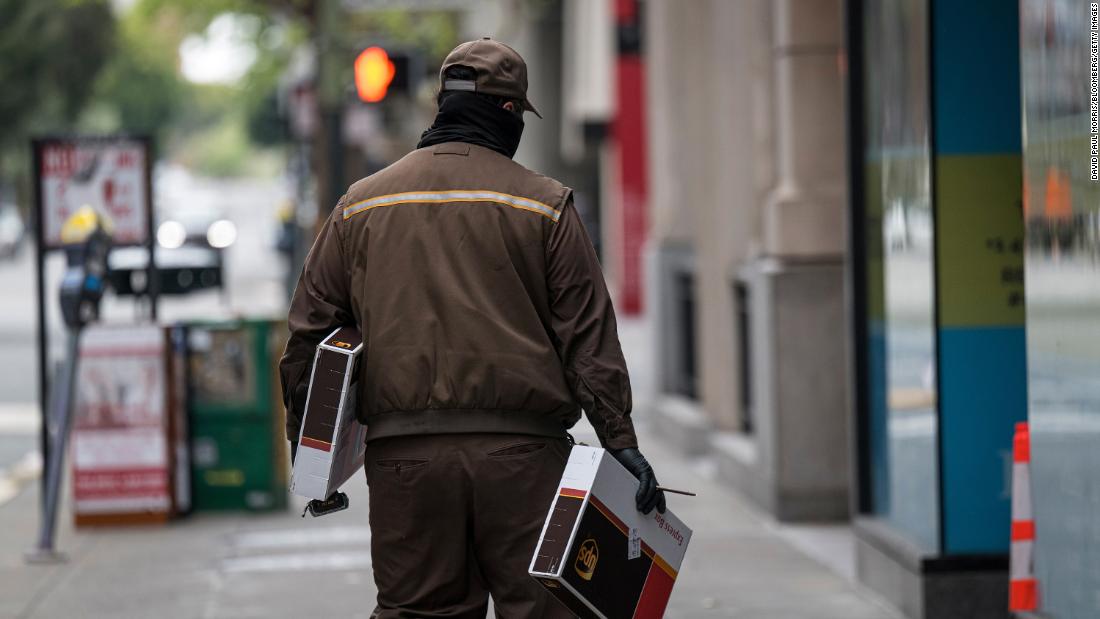 Online sales data and anecdotal evidence from employees we spoke to show the volume of packages handled has significantly increased. That has many UPS (UPS) workers putting in long, physically exhausting hours while, at the same time, taking extra precautions to protect themselves from infection.

“I’m working more than I ever have in almost 24 years at UPS,” Jack Warren, a UPS delivery driver based out of Providence, Rhode Island, tells CNN. Warren is also a union steward and is in charge of the safety committee at his facility. He says the team spends extra time cleaning “handrails, doorknobs, some of the machinery,” including the trucks and forklifts. Drivers, who walk into dozens of public spaces a day, also carry paper towels and cleaning spray, he said.

At UPS’s massive Worldport facility in Louisville, Kentucky, which processes roughly 2 million packages a day, two employees have died from Covid-19, according to Teamsters Local 89, which represents workers at Worldport, and a Clarke County, Indiana health official. It’s unclear where the workers contracted the virus, the company said. “COVID-19 is a community-spread virus. There is no way to know how/where someone contracted it,” wrote UPS spokesman Jim Mayer in an email to CNN.

The company won’t confirm how many workers have gotten sick, he added.

The company has put several measures in place to keep workers safe. UPS began distributing masks and personal protective equipment to workers in early April, Mayer said. To encourage social distancing, he said, the company has also added markings at six-foot intervals in areas where employees are likely to gather. At Worldport, it has rented school buses so workers can spread out while on company shuttles, Mayer said.

UPS said it is also offering two weeks of paid sick leave to workers who have been diagnosed with Covid-19 or placed under a quarantine. But some workers say more could be done: A Change.org petition demanding hazard pay for UPS workers has received nearly 240,000 signatures. The company said it’s not providing hazard pay at this time.

The coronavirus has impacted the lives of many UPS delivery drivers, package handlers and their families. CNN spoke with some of them about their experiences. Here’s what they had to say (these comments below have been edited for clarity).

I go in an hour early every day and oversee our safety committee. Every morning we make a new mixture of water and bleach and fill spray bottles. We spray parts of the building — handrails, doorknobs, some of the machinery. We’ve got 400 trucks that need to be sprayed twice a day. We even spray down the forklifts.

When I get back at night, I stay for another hour. I spray out probably 75 trucks myself at night.

Every truck has a roll of paper towels and a spray bottle. I don’t think guys have realized how many doorknobs and elevator buttons we touch. Some guys go in over 200 places a day.

We’re getting flat out hammered right now. No one wants to go to the store, everyone buys everything online.

My wife definitely pays a price. She’s tasked with trying to keep our kids going with online schooling. She doesn’t get a break and she pretty much doesn’t get to leave the house because she’s not supposed to. And obviously my kids don’t get to spend time with their dad during the week.

I’ve probably received more “oh thank you so much for all you’re doing,” probably more the last two weeks than I have in the last 10 Christmases combined. That’s typically when people notice how hard we’re working.

I’m concerned every day. The disease can be on the boxes. We don’t know who touched them, sneezed on them, coughed on them. There’s all the people that are in the warehouse working.

In my house, we have four jobs — my girlfriend has two and I have two. Three of those jobs all shut down. It’s just UPS right now. I like UPS, it’s a good job. I had to do something to bring in some money.

In the beginning when this all started, I didn’t feel they were [doing enough to protect us]. They weren’t giving us gloves or anything like that. No masks, no hand sanitizer. Now they are. (UPS began handing out masks and other protective gear to workers in early April after the Centers for Disease Control and Prevention issued new guidance.)

It was a debate that I had with myself, [to keep working and face the risks]. I thought about the unemployment. I don’t make a lot of money at UPS. But I put together that my unemployment wouldn’t be that much. It would probably be good for me just to keep working.

I’m the person on call when someone gets injured or has an asthma attack or something. It’s possible if someone had Covid at UPS’s Worldport facility, I’d be called to see them.

But I’ve had to stop doing [the first-aid response work] because I live with two immune-compromised people. I struggle with the decision honestly. I do worry that, because I’m not on call, there’s less people available to help. I still load packages to pay for college…If I didn’t have the school debt I probably would’ve quit.

My mother is constantly stressed about this. I hope she takes comfort in the dozens of things I’m trying to do to limit this risk. She can see my shoes outside on the porch, the rubbing alcohol I keep on the side table for my hands. She can hear the dryer every morning as I wash my clothes.

I tell her that somebody has to do this. Someone has to go into the line of fire. If we’re being honest with each other, there’s no way this is going to stop. There’s no way that UPS is going to wake up tomorrow and say ‘You know we’re putting a bunch of people in danger. We can’t reasonably do this anymore. Shut the whole place down.’

That would destroy the economy.

Her fiance is a UPS delivery truck driver in Lexington, Kentucky

We see the stress they deal with. When they come home we see it on their faces. We know that they’ve had a hard day. What they’re dealing with is what they deal with around the holidays, when people are ordering a lot of stuff online for Christmas.

I was trying to find gloves to pack in his lunch bag and I personally gave him like a spray bottle with a bleach cleaner and hand sanitizer and stuff to make sure he was somewhat protected.

We got into it one day because he was getting ready to come into the house with his shoes and stripping down his uniform and putting it over a dining room chair and I was like, “hold up.” It makes us paranoid that they have been on the front line and could potentially bring it home. I’m worried about him. He’s young, but he could get it.

I make him take his boots off outside. He goes in so many public places throughout the day. I have a towel for him to sit them on and I spray them down with a Clorox cleaner every night. It’s made me feel a little crazy, but I feel like during these times they have to be, just to be cautious to make sure we aren’t bringing those germs in the home.

I want people to understand when they do order something that is massive and heavy, just to give them something to do during this time, they need to find a way to say thank you to the person that’s delivering it.

It’s not easy. I get emotional thinking about it, because I see it.