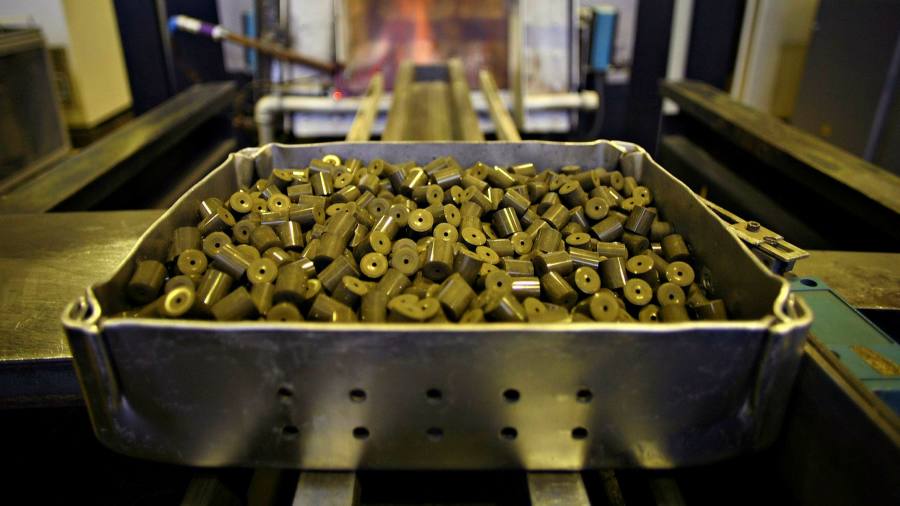 The collapse in economic activity from the coronavirus pandemic has hit the price of most industrial metals and minerals, but uranium is bucking the trend.

The price of the radioactive material, used in nuclear power stations to generate electricity, has risen 14 per cent in the past two weeks to $27 per pound, breaking out of the $24 to $26 range it has held for almost a year.

Analysts and investors say the rally reflects concerns over disruptions at some key uranium mines, which have highlighted the potential for supply shocks.

“Demand for uranium is very distributed — there are 442 reactors across the globe — but the supply side is very, very concentrated,” said Andre Liebenberg, chief executive of Yellow Cake, a London-listed investment vehicle that has stockpiled a large amount of the metal in anticipation of higher prices.

“I think there are four or six mines that produce two-thirds of global supply. If we have any issues on the supply side, that is going to have a real impact,” he said.

Last week, Canadian miner Cameco announced the closure for a month of Cigar Lake, a mine that produces about 13 per cent of global uranium mine supply. Travel restrictions and the challenge of implementing social distancing at the remote site in northern Saskatchewan — where workers fly in for shifts that last one or two weeks — forced the mine to stop work.

A few days later, Namibia, a key supplier to China’s vast nuclear industry, halted all mining activity to curb the spread of the deadly virus, while Kazakhstan — the Saudi Arabia of the uranium world — has locked down six major cities and declared a nationwide state of emergency.

So far, supplies from Kazakhstan have not been affected. However, most of the sites operated by state-controlled miner Kazatomprom are in remote southern regions where staff live and work in close quarters, so a coronavirus outbreak could have a big impact.

“We remain committed to our 2020 production and sales plans, but the situation is changing rapidly, and we are preparing for various scenarios accordingly,” Kazatomprom said in a recent statement.

While demand for uranium is not immune to the downturn in economic activity caused by coronavirus, the market is less exposed than other industrial metals and commodities such as oil, according to Richard Hatch, analyst at Berenberg.

“We have seen power demand ease slightly because less industry is working but the need for base load power remains,” said Mr Hatch, noting that nuclear reactors supply about 10 per cent of the world’s electricity.

Analysts and investors say uranium is unlikely to stay above its recent price range for long unless there is increased demand for the radioactive metal from utility companies.

Annual global demand for uranium is 150m pounds, 85 per cent of which is met through long-term supply contracts between producers such as Cameco and utilities.

Typically, nuclear fuel buyers for utilities look to secure contracts roughly two years ahead of use and with a number of contracts dropping off from 2021, buyers are likely to step into the market this year.

“To see a sustained breakout and recovery in prices you need to see utilities going into the [contract] market. And apparently some of them have been testing the market already this year,” said Mr Liebenberg.

Before the 2011 Fukushima disaster, uranium traded as high as $70 per pound.