US crude tumbles to 18-year low as supply overwhelms demand 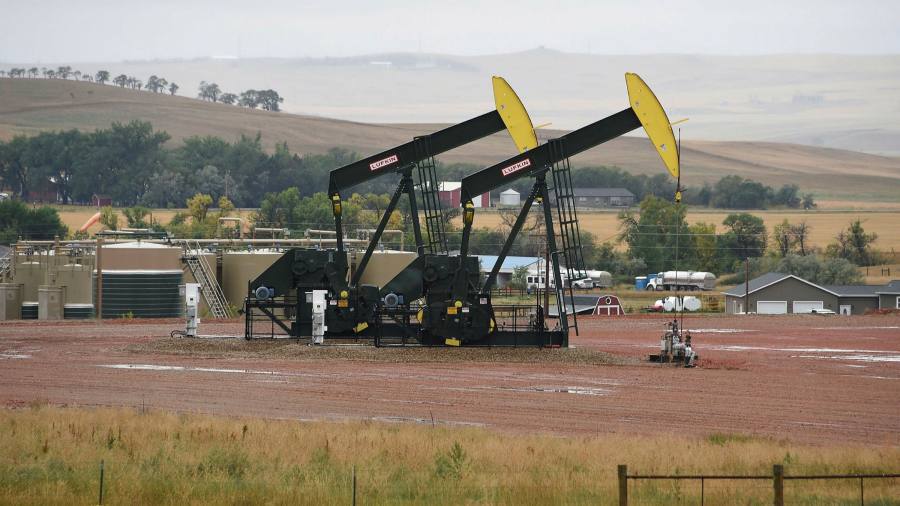 US crude oil prices sank below $18 a barrel on Friday, the lowest level since 2002, as energy markets struggled to absorb a record glut created by the coronavirus pandemic.

Prices have dropped this week despite a landmark US-backed deal by the Opec+ group of producers to cut production by almost a tenth. But traders have judged that the collapse in demand is much greater — with up to a third of global consumption lost to measures to restrict the virus’s spread.

That has led to volatility, as traders bet oil storage will rapidly fill up, including at the US crude benchmark’s delivery hub of Cushing, Oklahoma.

The front-month West Texas Intermediate contract for May delivery, which expires early next week, lost more than 10 per cent to trade at $17.53 a barrel, an 18-year low. The second-month contract for June delivery was steadier, trading flat at about $25.53 a barrel. Brent, the international benchmark, was also steady at $27.90 a barrel, but it has lost almost $5 this week.

“With low liquidity close to expiry, these erratic moves tend to happen,” said analysts at Rystad Energy. “But at the same time it is no wonder that WTI for May 2020 is seeing such low prices relative to the June 2020 contract.”

“This is because the market knows that the US crude stocks will fill very rapidly . . . in the next few weeks as refinery runs continue to be cut tremendously in the US due to a lack of storage possibilities, especially for unsold gasoline.”

The analysts added that US commercial crude stocks will likely remain at record levels into the first half of May.

The huge price gap between contracts close to delivery, and those expiring later, has raised concerns in the industry that the futures market is becoming detached from the underlying physical market, partly because of a rush of money into exchange traded funds as investors look to pick the bottom in crude.

Those investors risk large losses, as ETFs need to sell the expiring front-month contract and buy the second to maintain their holdings — a process known as rolling positions.

But with a large discount in the market’s current structure, investors lose a chunk of their money each month in the roll, meaning losses are possible even if crude prices start to recover.

Hedge fund manager Pierre Andurand, whose specialist oil fund has made strong returns betting against crude this year, said on Twitter on Friday that the amount of buying in one oil ETF had been “staggering”, exceeding historical levels of long positions established by funds during bullish market cycles.

“[I am] wondering how well those investors understand what can happen to the roll yield when inventories are full or close to full,” Mr Andurand said.

A large price discount between physical trades in the North Sea and the Brent contract has also emerged, with Dated Brent — a physical marker used to price oil deals worldwide — trading at close to a $10 discount to futures prices in recent days.

This market structure, known as contango, is partly a result of record oversupply and is common when a glut of oil emerges, as contracts for later delivery need to price higher to cover the rising cost of storage. The size of the gap has led some to dub it “supercontango” as traders have been scrambling to snap up any onshore facilities available, while also chartering supertankers for floating storage.

Saudi Arabia, which together with Russia agreed the Opec+ deal last week after coming under pressure from US president Donald Trump, has indicated it could make further cuts to output. Prince Abdulaziz bin Salman, Saudi Arabia’s oil minister, and Alexander Novak, his Russian counterpart, released a statement late on Thursday saying they were “prepared to take further measures jointly with Opec+ and other producers if these are deemed necessary”.

Mr Trump has supported the oil cuts despite his own long-running animosity towards Opec+ as the price crash threatens the future of the US shale industry. He has stopped short of committing to mandated cuts for US producers, but output is expected to fall sharply, perhaps by 10 per cent or more, as drillers idle rigs and cut back on capital expenditure.

ConocoPhillips said on Thursday it would “voluntarily curtail” 225,000 barrels a day of production — almost a fifth of its recent total — across North America.