US faces ‘avalanche of evictions’ as rent protections expire 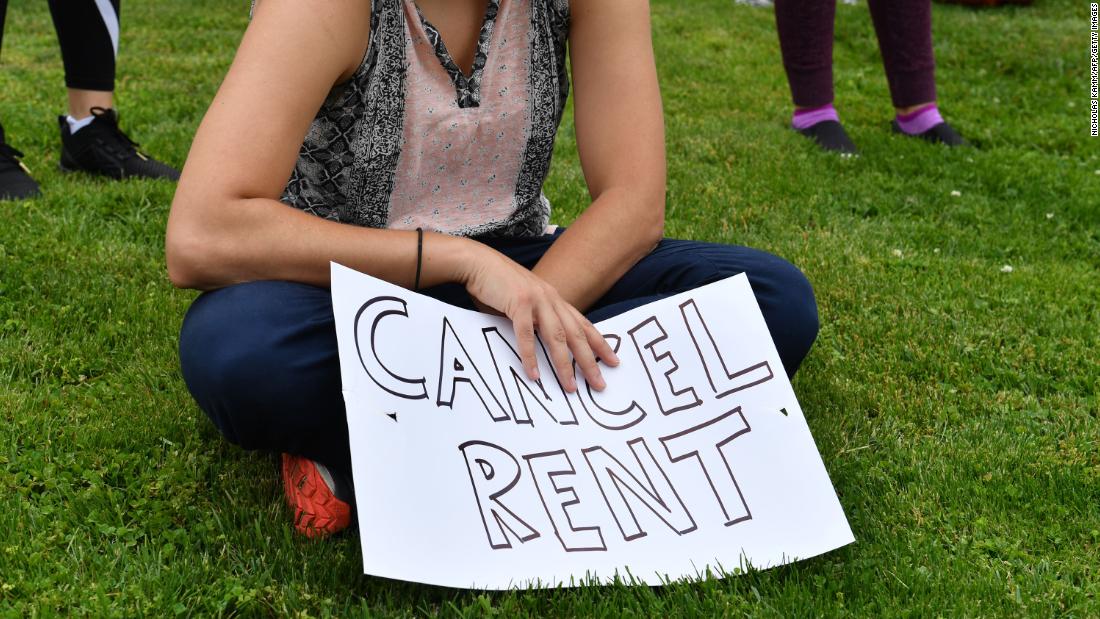 But thanks to a three-month eviction moratorium that New York put in place in March due to Covid-19, she has been allowed to remain in her home. New York has since extended the moratorium for two more months, but Ashley doesn’t meet the tighter criteria. So come Monday, she could face immediate eviction.

“I wouldn’t wish [eviction] on my worst enemy,” Ashley said. “Not knowing where you’re going to rest your head up for the next day, that’s not good.”

Since the Covid-19 shutdowns began, renters in 42 states and Washington DC have received protection from eviction under statewide moratoriums. But more than a third of those moratoriums have since been lifted and more are set to expire, leaving renters to come up with months of back pay or face losing their homes.

Ashley was laid off from her job as a teacher’s aide with the Department of Education in March. Since then, she’s been taking care of her 5-year-old son Nazir while looking for work and a new place to live. She says the extra $600 a week in enhanced unemployment benefits from the federal Coronavirus Aid, Relief, and Economic Security (CARES) Act has helped. But those benefits are set to expire on July 31.

“There’s not really many options out there for us when it comes to trying to find a place during this pandemic,” said Ashley. She also has a voucher for Section 8 low income housing, which she says is making her search for a new home more difficult because of low inventory and a lack of in-person showings during the pandemic. New York has lost 1.1 million affordable housing units (those that rent for $900 a month or less) over the last two decades, according to the Coalition for the Homeless. Ashley’s rent for her apartment in Queens is $850 a month.

An ‘avalanche of evictions’

By the end of September, up to 23 million Americans will be at risk of eviction, according to a report by the Covid-19 Eviction Defense Project and the Aspen Institute Financial Security Program.

The Legal Aid Society estimates that in New York alone, 50,000 evictions will be filed on Monday when the state’s blanket moratorium on evictions expires. The extended moratorium will only apply to renters who have suffered a financial hardship due to Covid-19, or who qualify for unemployment. This leaves out undocumented immigrants, certain gig workers or people working off the books, and renters with pending eviction cases.

“I think that the United States can expect an avalanche of evictions that will impact the entire community and have a cascade of additional losses, everything from financial well-being to health, to housing opportunities across the country,” said Emily Benfer, director of the Health Justice Advocacy Clinic at Columbia Law School.

It’s expected that people of color will be evicted at a much higher rate. Latinx and Black residents make up 18% and 12% of the US population, respectively, but account for 28% and 18% of people living in renter households who have suffered job or income loss due to Covid-19, according to a study by UC Berkeley.

“Black households are more than twice as likely to be evicted as White households,” said Benfer. “It’s a significant impact that we’re going to have here, they will be the hardest hit.”

And that could lead to record homelessness. The Coalition for the Homeless in New York City says its mobile soup kitchens have seen a 100% increase in need and their housing hotlines have been slammed with newly homeless people asking for help.

“We’ve never seen anything like this,” said Dave Giffen, executive director of the Coalition for the Homeless. “We know that this isn’t the end. It’s not even the middle. This is only the beginning of the crisis.”

How states and the federal government can help

On a national level, the CARES Act provides some protection from evictions and late fees for tenants who live in federally subsidized or federally backed housing through July 24. Also, earlier this week, several agencies extended eviction moratoriums for tenants who rent single-family homes from landlords with federally-backed loans through the end of August
That covers about 28% of the nation’s rental units, according to the Urban Institute. The rest must rely on the quickly expiring state eviction moratoriums and other relief efforts.

As state moratoriums expire, some governors have been able to funnel federal dollars from the $2 trillion CARES Act into rent relief funds. In Iowa, Republican Gov. Kim Reynolds created a rental assistance fund for her state as eviction restrictions lifted at the end of May. In New York ,Gov. Andrew Cuomo signed a bill creating a $100 million fund in rental assistance for New Yorkers through August 20.

But housing advocates say New York’s fund will leave many renters out. Benfer estimates six times as much rental assistance is needed.

“The bill is merely a placeholder. The act only covers renters who lost their income between April 1st and July 31st and who earn less than 80% of the area median income, which in New York City, is about $81,000 for a family of three,” said Benfer.

There are other proposed measures that could help. The $3 trillion HEROES Act passed by the House — but stalled in the Senate — would provide $100 billion in rental relief, including a national moratorium on evictions. A measure like that could keep people like Ashley in their homes and out of shelters according to housing advocates.

Ashley does not qualify for New York’s rent relief fund because her eviction notice was sent before the state’s first blanket moratorium. That leaves her with even fewer options. She was homeless about 18 months ago with her then 3-and-a-half-year-old son and doesn’t want that to become her reality again.

“No child deserves to have to go through an experience like that. That’s a very big fear of mine,” said Ashley. “It’s not a good feeling.”