US stocks head for slide despite Fed intervention 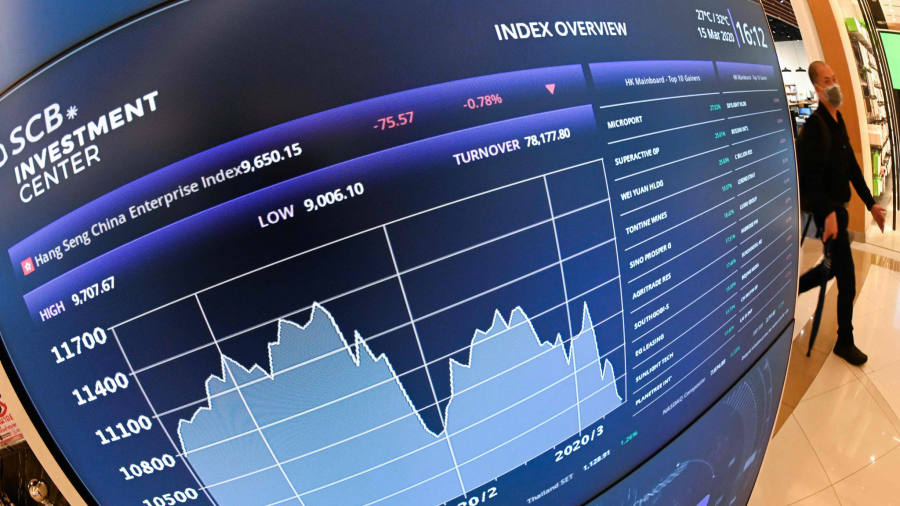 US stocks headed for another slide as Asian trading got under way on Monday, despite an aggressive package of measures to support markets from the Federal Reserve and other big central banks.

Futures markets pointed to a 4.8 per cent decline in the benchmark S&P 500 index when it starts trading later in the global day, even after the Fed said it would slash interest rates effectively to zero and kick-start a fresh programme of bond buying in response to the deepening crisis over the coronavirus pandemic. At one point the futures were limit down, suggesting a 5 per cent fall.

The 10-year US Treasury yield fell 33 basis points to 0.635 per cent. Yields fall as prices rise.

“The Fed has thrown everything at this. If we are now facing the end of central bank action, it means we are on our own,” said Seema Shah, chief strategist at Principal Global Investors. “There is a fear settling in the market, investors are terrified that this was all that was left.”

In early trading in Asia-Pacific markets, Australia’s S&P/ASX 200 index dropped 5 per cent. Japan’s benchmark Topix fell 1 per cent, having briefly risen at the open after the central bank announced it would hold an emergency policy meeting at noon on Monday.

The Japanese yen, a haven during times of uncertainty, rose 1.3 per cent to ¥106.33 per greenback.

Many investors had already anticipated a forceful reaction from the US central bank, with several predicting that it would come before markets opened on Monday and before its next scheduled meeting, which is on Wednesday. While the measures were largely stronger than expected, news of the spreading coronavirus over the weekend had meant that many were girding themselves for another market drop regardless.

Zach Pandl, an analyst at Goldman Sachs, suggested that even action on this scale may have only a modest impact on markets. It should help “on the margin”, he said in a note to clients, “although other weekend news flow has been concerning”, pointing to the accelerating virus outbreak in Spain and France and shutdowns in some US schools.

But he added that it “should significantly ease funding market stress, particularly the dollar shortage overseas”. Greater government spending will probably be needed before some of the demand is removed for haven US government bonds, he added.

Joachim Fels, Pimco global economic adviser, said policymakers will need to take further action “to prevent what currently looks like an inevitable recession from turning into a depression, and financial markets to go from a drawdown to a meltdown”.

Commodities markets also showed continuing pessimism. Oil prices recommenced their descent shortly after markets opened, with Brent crude losing 2.9 per cent to $32.87 a barrel. Gold — a haven asset in times of stress — rose 1.4 per cent to $1,550 a troy ounce.

Some fund managers and analysts have grown worried that even forceful monetary easing will only go so far in moderating the economic impact, and are more anxious for governments to spend more aggressively to make up the shortfall in demand.

“They are pulling out all the stops. This tells you this is a serious situation,” said Torsten Slok, chief economist at Deutsche Bank Securities. “There are now also zero interest rates in all OECD countries. This tells you there is limited firepower left now. They have decidedly handed over the baton now to fiscal policy.”

“Some may become worried that the Fed is indeed out of bullets and actually feed panic. However, my guess is that while the volatility is likely to persist for the next few months this could well help the market to begin to calm a bit, move up and down less and perhaps show evidence in the coming weeks of bottoming,” said Jim Paulsen, chief market strategist for the Leuthold Group.