US Treasury plumps for longer-term debt to fund $3tn stimulus 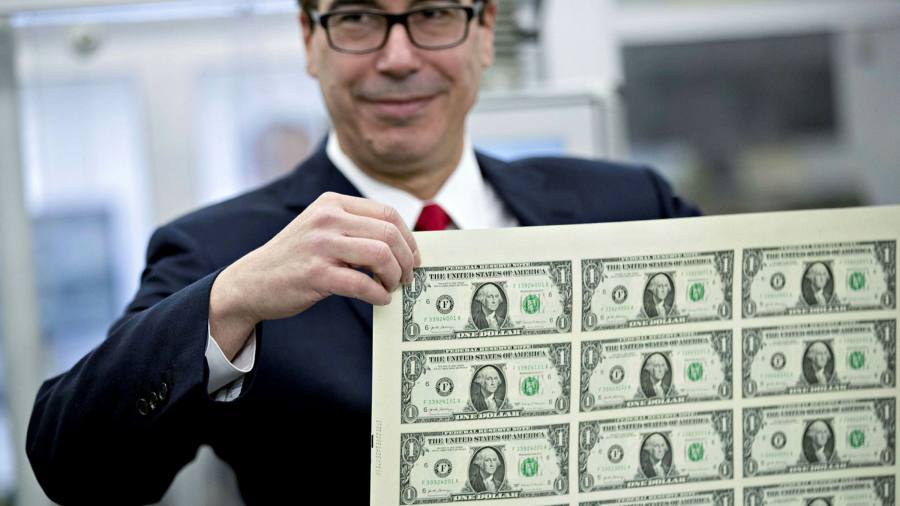 The US Treasury says it plans to significantly increase the proportion of borrowing through longer-term debt, as it set out details of how it will fund the government’s $3tn-plus stimulus of the coronavirus-ravaged economy.

On Wednesday the department, which has already indicated it will revive a 20-year bond it last issued three decades ago, said that it would boost the size of three, 10 and 30-year bond auctions to record amounts.

The outline comes just days after the Treasury said that it would need to borrow $3tn before the end of June, a historic sum that is more than triple the previous record seen in 2008 and far beyond the $1.28tn the department borrowed for the entirety of the 2019 fiscal year.

Congress has passed four large spending packages since the virus outbreak including bailout funding for corporations and cheques for American taxpayers to see them through the lockdowns.

“In light of the substantial increase in borrowing needs, Treasury plans to increase its long-term issuance as a prudent means of managing its maturity profile and limiting potential future issuance volatility,” the agency said in a statement.

Given that the Treasury has a captive buyer, it makes sense to issue as much as [it] can

Market participants have long braced for the borrowing surge, given the enormous support provided by Congress to ease the economic burden brought on by Covid-19, but some were surprised by the magnitude by which the Treasury is ramping up issuance of long-dated debt.

“There is a lot more duration coming to market than the market was anticipating,” said Gennadiy Goldberg, senior US rates strategist at TD Securities, noting that long-dated Treasury yields rose following the department’s announcement, indicating a fall in price.

The department — led by Treasury secretary Steven Mnuchin — largely relies on the market for bills, which mature in one year or less, to meet its funding needs. It has already raised $1.5tn in the second quarter, according to Thomas Simons, a money market economist at Jefferies, with an expected $1.4tn to come.

Wednesday’s announcement indicated this would be supplemented with a record $96bn of debt maturing in three, 10 and 30 years. Taken together with increased auctions for two, three and five-year notes as well as other instruments, the Treasury said it amounted to an additional $154bn of issuance over the next three months.

The Treasury department also laid out in detail its plans to issue a 20-year note for the first time in three decades, including $20bn in a first sale slated for May 20. It had previously disclosed that auctions would be held in the third week of the month when Treasury inflation-protected securities, or Tips, are also sold.

The agency last issued a 20-year note in 1986, pulling it from its arsenal of funding instruments due to insufficient demand.

On top of the $3tn in the current quarter, the Treasury said it expected to borrow a further $677bn in the three months to September. Having already borrowed $477bn in the first quarter of the year, it would bring the total amount to more than $4tn for the full fiscal year.

Investors said they do not expect yields to rise much higher from here, however, given that the Federal Reserve has committed to purchase an unlimited quantity of Treasuries. The US central bank is now buying government debt at a pace of $8bn a day, down from a peak of $75bn at the height of a financial market liquidity crunch in March but still a dramatic expansion of its balance sheet.

Subadra Rajappa, head of US rates strategy at Société Générale, said she expected the Fed would adjust the pace of its buying should there be a “meaningful sell-off” in US government debt.

“Given that the Treasury has a captive buyer, it makes sense to issue as much as [it] can,” she said.