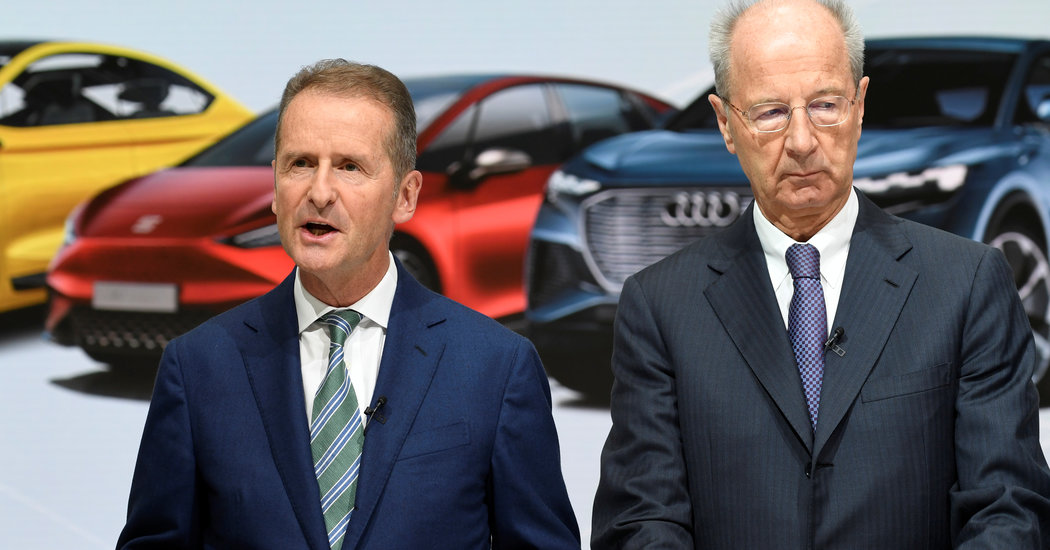 In return, prosecutors will drop the charges against Hans Dieter Pötsch, the chairman of Volkswagen’s supervisory board, and Herbert Diess, the chief executive, the company said in a statement. The company did not admit any wrongdoing.

The penalty is relatively modest compared to the over 20 billion euros that the company has paid in connection with the scandal.

The settlement removes a legal burden from Mr. Diess as he tries to steer Volkswagen through a brutal downturn. Registrations of new passenger cars plummeted 76 percent in April, the biggest drop on record, because of coronavirus lockdowns, the European Association of Automobile Manufacturers said Tuesday.

Mr. Pötsch and Mr. Diess were charged last year with stock market manipulation because, prosecutors said, they had neglected their duty to tell shareholders that the company was about to be accused of using illegal software in diesel vehicles to conceal excess emissions. Both managers denied wrongdoing and continued to do so Wednesday. They had faced prison terms of up to five years if convicted.

German prosecutors continue to pursue criminal charges against dozens of other former Volkswagen executives accused of devising the illegal software and then staging a cover-up when regulators in the United States became suspicious. The suspects in the case include Martin Winterkorn, the chief executive until his resignation days after the emissions cheating came to light. He has also denied wrongdoing.

Volkswagen is still recovering from the financial damage that occurred after the U.S. Environmental Protection Agency accused the carmaker in 2015 of illegally cloaking poisonous emissions for almost a decade.

The company later pleaded guilty to charges in the United States that it had programmed diesel cars to recognize when they were being tested for emissions compliance and crank up emissions controls in response. During everyday driving, however, the antipollution equipment was dialed back to minimize wear and tear.

Mr. Pötsch was the chief financial officer at Volkswagen during the time that the illegal software was being developed and deployed, but he has maintained that he had no knowledge of it. He was named chairman of the supervisory board in October 2015, only weeks after the emissions cheating became public. Mr. Pötsch is a close confidant of the Porsche and Piëch families, who own a majority of Volkswagen’s voting shares.

Mr. Diess, a former BMW executive, arrived at Volkswagen in July 2015, two months before the E.P.A. formally accused the company of wrongdoing. Initially he was in charge of the Volkswagen division that makes Volkswagen brand cars. The supervisory board named him chief executive in April 2018.

Mr. Diess has been trying to remake Volkswagen as a leader in electric vehicles, while also trying to reassure American officials that the company has become more ethical and less scandal-prone — a condition of a plea bargain in the United States. The resolution of the charges removes a major distraction for Mr. Diess as he faces the other challenges.

Volkswagen said Wednesday that the company, rather than the executives, would pay the fines of 4.5 million euros each. The supervisory board said in a statement that it was “convinced that Mr. Pötsch and Dr. Diess did not — in connection with the public prosecutor’s office’s accusation to which the market manipulation proceedings relate — breach any duties” to the corporation.