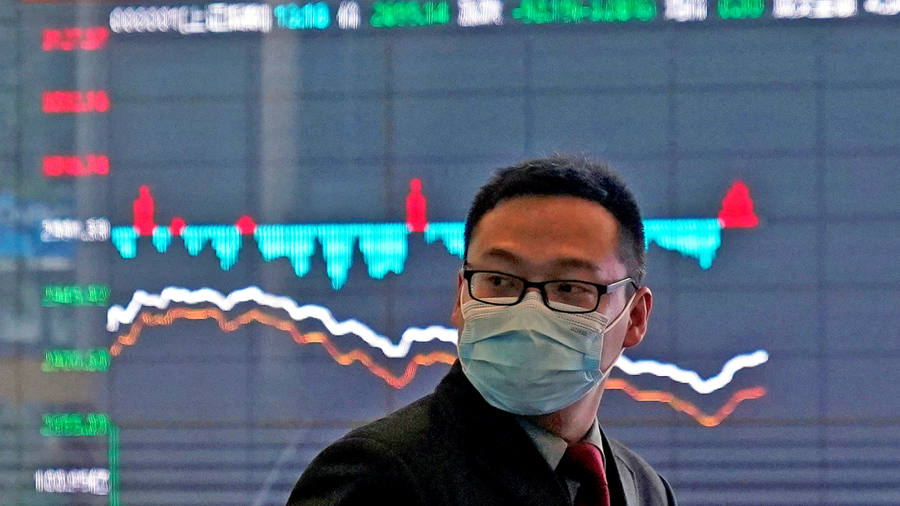 US stocks ended a seven-day losing streak, rising 4.6 per cent in the biggest one-day gain in 14 months on expectations central banks will step in to soften the adverse economic impact of the global coronavirus outbreak.

The rebound pulled the benchmark index out of correction territory, and leaves it 8.8 per cent below its February 19 peak.

The gains accelerated during the afternoon following reports G-7 finance ministers and central bankers would hold a teleconference Tuesday to discuss their response to the coronavirus outbreak.

Wall Street was led higher by technology stocks, while investors also waded in to buy beaten-up discretionary names. The Nasdaq Composite rallied 4.5 per cent, while the Dow Jones Industrial Average jumped 5.1 per cent.

The sharp moves came after the Bank of Japan, in the wake of soothing statements from the Federal Reserve on Friday, said it would provide ¥500bn ($4.62bn) in short-term liquidity to banks and a record ¥100.2bn in purchases of exchange traded funds.

After Wall Street’s closing bell, the European Central Bank said it was “closely monitoring” the coronavirus outbreak and its implications for the economy and monetary policy. “We stand ready to take appropriate and targeted measures, as necessary and commensurate with the underlying risks,” the bank said in a statement.

Expectations that the Fed could cut interest rates as soon as this month, have helped push bond yields sharply lower in recent days as prices for government debt soared. The yield on the benchmark 10-year US Treasury bond struck a record low on Monday, just above 1 per cent, but reversed course to be up 2.6 basis points to 1.15 per cent after Wall Street’s closing bell.

European stocks flicked back into positive territory, shaking off steep earlier declines. The broad Stoxx 600 index closed 0.1 per cent higher, while the FTSE 100 was up by 1.1 per cent. Asian stocks rallied overnight, with China’s CSI 300 index closing up 3.3 per cent in its best one-day performance since May.

“We haven’t seen this level of volatility in a long long time,” Liz Young, director of market strategy for BNY Mellon Investment Management, said. “People who were worried about things being too calm and complacent can stop worrying.”

The latest wave of buying came after newswires reported that finance ministers from major economies will speak on Monday, alongside their respective central bank governors, to discuss their response to the crisis. French finance minister Bruno Le Maire said the response would be “as co-ordinated as possible”. Italy has already said it would inject €3.6bn into its economy to mitigate the impact.

“What has happened over the day is that investors have realised that monetary policy is not going to make a difference,” said Kasper Elmgreen, head of equities at Amundi. “What could make more of a difference is if governments started a significant fiscal expansion.”

Traders are seeking to determine how far central banks and governments can prop up financial markets, which last week suffered a heavy decline while the disease, which originated in China, spread more forcefully around the world.

The Bank of England said it was working with the Treasury, the Financial Conduct Authority and its international partners “to ensure all necessary steps are taken to protect financial and monetary stability”.

The Bank of Japan also vowed to fight the economic effects of coronavirus. In an emergency statement, governor Haruhiko Kuroda promised to inject liquidity into markets and hinted at raising asset purchases, indicating the central bank is moving into crisis mode.

The US Federal Reserve has also hinted at support, signalling that it was prepared to consider cutting rates in response to the virus’s “evolving risks”.

But economists and market analysts say it is hard to determine how much monetary support would alleviate the pressure. “Central banks cannot cure the virus. They cannot force people to spend,” said Paul Donovan, chief economist at UBS Global Wealth Management. “However, central banks can help companies with cash flow problems, or whose debt service costs are challenging if demand weakens. Central banks exist to solve liquidity and credit problems, should those arise.”

Any optimism over the prospect of co-ordinated international action to fight the disease was tempered as the OECD warned global growth could halve this year from its previous forecast, and by Chinese manufacturing data that showed factory activity in February plunging to an all-time low.

Subscribers can use myFT to follow the latest coronavirus coverage