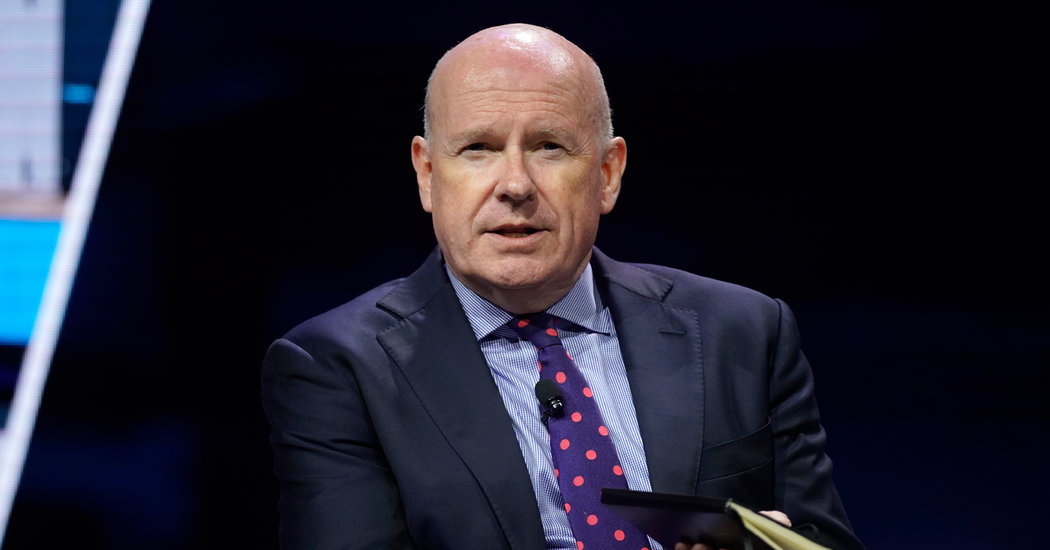 Staff members of The Wall Street Journal sent a letter to newsroom leaders on Monday accusing the paper’s former editor in chief, Gerard Baker, who has been an editor at large at the Journal since leaving the top job in 2018, of violating rules that apply to those who work on the news side.

The letter, from the board of the Independent Association of Publishers’ Employees, the union that represents Journal staff members, criticized a column by Mr. Baker on race and accused him of tweeting in a way that went against the paper’s social media policy.

While Mr. Baker expresses opinions in a weekly column, called Editor at Large, The Journal had classified him as a member of the news division, just as it had during his five-and-a-half-year run as the editor in chief.

On Tuesday, The Journal reassigned Mr. Baker, formally making him a member of the opinion staff, which is led by the editorial page editor, Paul A. Gigot, and is run separately from the news department. Those who work on the opinion side do not have to abide by the rules that apply to the paper’s news reporters and editors. They have more leeway in The Journal’s pages and on social media.

The Journal said the move had been in the works before the I.A.P.E. union sent the letter. “Conversations about Gerry’s move to Opinion have been underway for some time,” a spokeswoman said in an emailed statement. “His new, expanded role will include podcasts and other projects.” Mr. Baker did not immediately reply to a request for comment.

The I.A.P.E.’s letter was addressed to Matt Murray, Mr. Baker’s successor as editor in chief, and Almar Latour, who last month was named publisher of The Journal and the chief executive of its parent company, Dow Jones, which is part of Rupert Murdoch’s media empire.

The letter singled out a May 15 column by Mr. Baker headlined “The Often Distorted Reality of Hate Crime in America.” He led it with a description of the murder of Ahmaud Arbery, a black man who was shot while jogging in Georgia after he was pursued by white men, a killing that was captured on video.

The I.A.P.E. criticized the column, saying it “posits the highly controversial argument that black people commit more hate crimes than white people” and adding that to “‘prove’ that he uses only his own single weighted statistical calculation, with no attribution or context from experts either to support the idea or provide contrary views.” The letter also flagged several posts from Mr. Baker’s Twitter account that, it said, violated the paper’s social media policy.

The British-born, Oxford-educated Mr. Baker led The Journal at a time when its staff produced an award-winning investigation that exposed fraudulent claims by the health care tech company Theranos. On his watch, the paper was also at the forefront of reporting on payments involving President Trump and women who said they had once had sexual relationships with him.

His tenure was also marked by unrest. In late-night emails, Mr. Baker accused reporters and editors of adding commentary to their coverage of Mr. Trump, and the staff pushed back, accusing him in an all-hands meeting of going easy on the president. More than a dozen journalists left the paper for The Washington Post and The New York Times.

The Journal staff members’ criticism of their former boss came in the wake of the resignations of high-ranking editors at The Times and The Philadelphia Inquirer. James Bennet, the former editorial page editor at The Times, and Stan Wischnowski, the former executive editor of The Inquirer, stepped down after large numbers of staff members complained about their leadership at a time of worldwide protests against racism and police violence prompted by the killing in Minneapolis last month of George Floyd, a black man who died after he was pinned to the ground by a white police officer.

The letter from the Journal union also included complaints about Mr. Baker’s opinion columns for The Times of London, noting that news-side staff members are barred from contributing opinion essays to other publications. Recent headlines on those columns, the letter noted, included “Big Tech Is Blatantly Biased Against Trump” and “The Obama Halo Is in Danger of Slipping.”

In closing, the letter said the paper should hold Mr. Baker to the standards that apply to everyone else on the news side. Now that The Journal has put him in the opinion department, he can follow a different rule book.