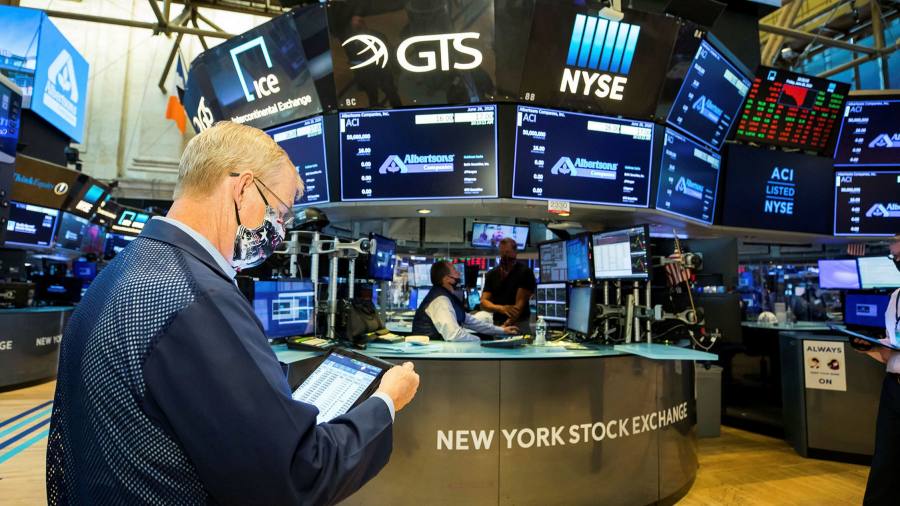 Stock markets in the US and Europe finished higher on Monday as investors bought industrial and other cyclical stocks, on the hope that rising US coronavirus cases will be contained and the economy quickly rebound.

The S&P 500 index rose 1.5 per cent in New York, led by the aircraft manufacturer Boeing, Southwest Airlines and the cosmetics maker Coty. The Nasdaq Composite rose 1.2 per cent.

The gains powered late rises on European equities markets. The benchmark Stoxx Europe 600 index rose 0.4 per cent. Benchmark indices in London, Paris and Frankfurt all turned decisively higher in the last two hours. The Dax 30 index was the best performer, rising 1.2 per cent.

Mark Haefele, chief investment officer at UBS Global Wealth Management, said the increase in Covid-19 cases in the US “can potentially slow the recovery, but are unlikely to derail it”.

“With virus cases still rising in a number of US states, a more volatile trial-and-error approach to reopening now appears more likely, but we expect any new restrictions to be localised,” he said.

The airline industry was boosted by news that US regulators could soon begin the process of certification for Boeing’s 737 Max planes, after two crashes forced the grounding of the aircraft model. Boeing rose 14.4 per cent. Southwest was up 9.6 per cent.

Consumer goods companies were higher after Coty agreed to buy a 20 per cent stake in Kim Kardashian West’s make-up brand KKW for $200m. Coty was up 13.3 per cent, while PVH, which operates the Calvin Klein brand, rose 9 per cent.

Crude rebounded after positive economic data raised hopes of demand recovery as Chinese industrial profits rebounded in May, and eurozone businesses and consumers began to show signs of confidence in a recovery.

It reversed losses after Chesapeake Energy, a pioneer of the US shale revolution, filed for bankruptcy following an oil price crash that has ravaged producers. Analysts said the company’s Chapter 11 filing could prompt others in the shale sector to follow suit.

Many investors also remained cautious about the durability of an economic recovery, given the coronavirus outlook in the US.

The US has 2.5m confirmed Covid-19 cases and more than 125,000 deaths from the disease — a quarter of the 10m infections and half a million global fatalities, according to Johns Hopkins University.

Alex Azar, US health and human services secretary, said on Sunday that Covid-19 cases were “surging” in the southern and western US where several states ended lockdowns early.

David Bailin, chief investment officer at Citigroup Private Bank, said the reopening had created a “burst of output”. He added: “[It] also caused a burst of disease and a rapid rise in infections and hospitalisations in previously under-impacted areas. The stall in economic activity we expected in the fourth quarter may occur earlier as people cannot go back to work as quickly in areas with high infection rates.”

Cautious investors continued to buy sovereign debt from haven countries. In Europe, the yield on UK 10-year debt fell as low as 0.150 per cent, a record low, before staging a small recovery, as the UK debt agency outlined plans for higher issuance over coming months. Yields fall when prices rise.

The UK two-year, five-year and 10-year swap rates also hit record lows, according to data from Tradeweb. The rate is used for fixed payments in a swap. Many traders see it as a more accurate reflection of private borrowing costs, because the rate does not mature on a specific date.

The US dollar partially reversed gains from last week, as it shed 0.3 per cent against a basket of currencies. Meanwhile, the British pound fell to a three-month low against the euro, after it dropped as much as 0.7 per cent to trade at €1.0913, as intensified Brexit talks got under way on Monday.

Shares in the Asia-Pacific region suffered heavy losses, with Japan’s benchmark Topix index 1.8 per cent lower, Hong Kong’s Hang Seng down 1 per cent and South Korea’s Kospi off 1.9 per cent.