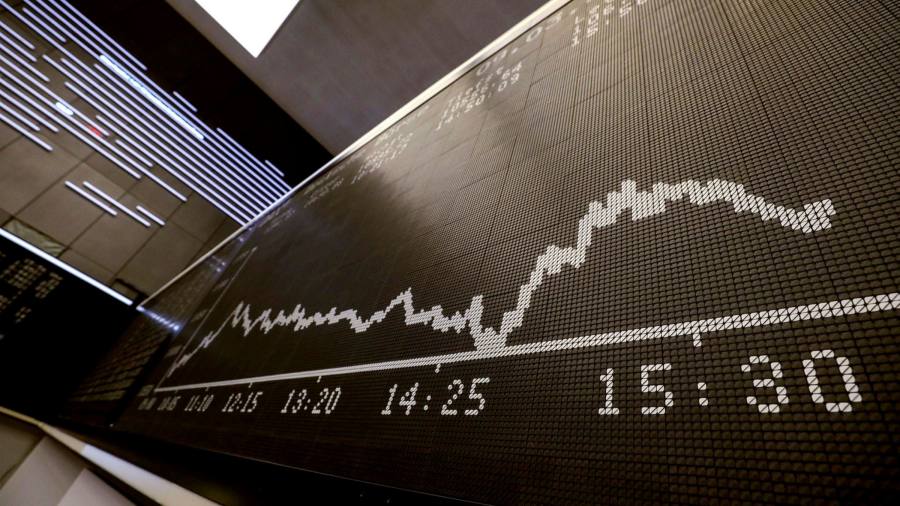 Stocks on Wall Street climbed on Friday, shaving their losses for the week after President Donald Trump signed the latest stimulus package into law and data suggested the weakness in America’s industrial heartland was less pronounced last month than feared.

The S&P 500 closed 1.4 per cent higher and the technology-heavy Nasdaq Composite gained 1.7 per cent thanks to a rally that built through the New York afternoon.

The advances took the edge off an otherwise negative week where investors have been grappling with the hit that businesses face from the coronavirus outbreak. The S&P 500 lost 1.3 per cent over the week.

The $484bn stimulus bill signed into law includes a top-up for a small-business rescue fund designed to help the US economy through the pandemic, as well as money for hospitals and coronavirus testing.

US durable goods data released on Friday hinted at some degree of resilience in the economy with only small falls in measures of underlying spending, beyond a sharp drop in transportation orders.

“We were surprised by much stronger than expected core durable and capital goods orders in March, given that production of many industrial goods slowed as facilities closed to control the spread of Covid-19,” said Veronica Clark, an economist at Citigroup in New York.

Dutch bank ING described the report, which showed only a minor dip in a key proxy for business investment, as “good news”.

“How sustainable this is will depend on how quickly the economy reopens given manufacturing surveys are painting a grim picture right now,” the bank added.

The Brazilian real hit a record low against the US dollar, rounding off a 30 per cent drop since the beginning of the year, driven by concerns about the government’s handling of the pandemic and expectations of a central bank rate cut. The latest push lower came after the resignation of the justice minister.

European stock markets fell, following Asian markets lower and catching up to Wall Street’s decline in the previous session. Both the continent-wide Stoxx Europe 600 and the FTSE 100 in London dropped by a little more than 1 per cent.

Germany’s Dax declined 1.7 per cent, after the Ifo Institute reported a record collapse in the country’s business sentiment and European leaders failed to find common ground on the size and form of a “recovery fund” for EU nations.

Despite chancellor Angela Merkel telling fellow EU leaders on Thursday that Germany is prepared to make a substantial financial contribution to help relaunch the region’s economies, investors were discouraged by the lack of agreement on the details.

Italian sovereign debt rallied on Friday after a turbulent start to the day, as investors waited for a potential downgrade of the country’s credit rating from S&P Global. Recent moves by the European Central Bank to backstop credit markets may help cushion the blow of a cut to Italy’s credit rating, investors said. The yield on the Italian 10-year bond, which moves inversely to its price, dropped 0.15 percentage points to 1.83 per cent.

New official data showed that UK retail sales tumbled the most on record last month, the latest in a string of dire statistics.

The falls on the European exchanges followed declines in markets in Asia, after a Chinese trial of remdesivir showed the treatment did not improve the condition of patients or reduce the pathogen’s presence in the bloodstream. MSCI’s broad measure of Asia Pacific stocks fell 0.7 per cent.

Investors “should expect more volatility across all asset classes as we try to appropriately price in something we have never experienced before”, said Hannah Anderson, global market strategist at JPMorgan Asset Management, of the future path of the outbreak.

Meanwhile, oil capped off a frenzied week of trading with traders weighing up the shortfall in storage against growing signs of global producers beginning to choke supply. Brent crude, the international oil benchmark, settled 0.5 per cent higher at $21.44 a barrel. West Texas Intermediate, the US oil marker, increased 2.7 per cent to settle the week at $16.94 a barrel.

The mixed fortunes for oil came after it was reported that Kuwait had started reducing output and US shale producer Continental Resources had halted most of its production, ahead of planned cuts by Opec and fellow suppliers that are set to begin on May 1.