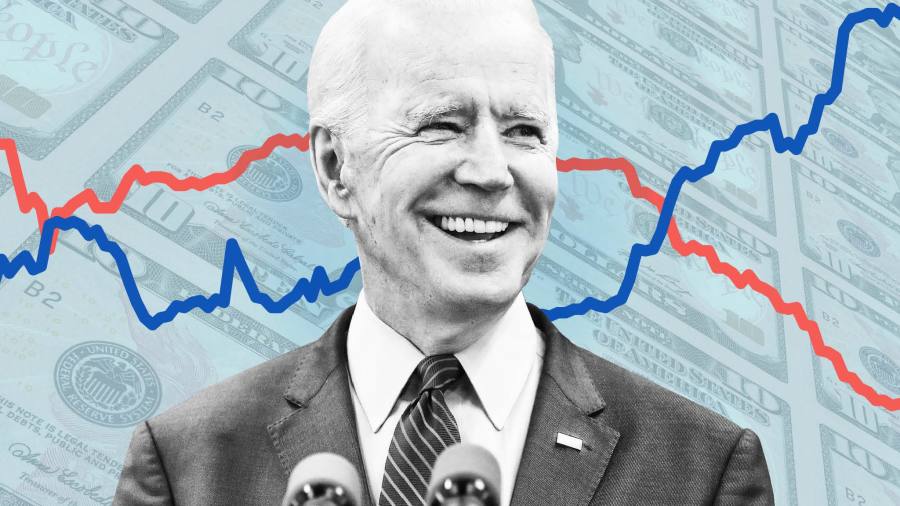 A surge in support for Joe Biden ahead of November’s US presidential election is forcing Wall Street analysts to consider the potential market impact of the former vice-president winning the top job.

Support for Mr Biden has surged over the past month, following criticism of President Donald Trump over his handling of coronavirus and his response to Black Lives Matter protests.

On Friday betting markets put the former senator for Delaware’s chances of winning the election at more than 59 per cent, near a record high touched earlier in the week and 23 percentage points clear of Mr Trump, according to averages compiled by RealClearPolitics.

Predictions among investors have also shifted. A Citigroup poll of 140 fund managers released this week found that 62 per cent believed Mr Biden would triumph — a reversal from December, when 70 per cent of investors surveyed by the bank predicted victory for Mr Trump.

Some analysts think Mr Biden’s Democratic party could even secure a majority in both chambers of Congress.

As expectations of a Biden win increase, “investors will start to focus on the pendulum swing from the ‘Trump bump’ to a new status quo”, said Susan Schmidt, head of US equity for asset manager Aviva Investors.

Some analysts expect higher taxes under a Biden presidency. Mr Trump’s 2016 victory sparked a bounce in stock prices as investors factored in light-touch regulation and a lower corporate tax rate — which his administration went on to deliver, cutting it from 35 per cent to 21 per cent.

Goldman Sachs has estimated that a partial reversal of the 2018 tax cut that would raise the rate to 28 per cent, in addition to increases on other rates, would take about 12 per cent off the total 2021 earnings-per-share of the constituents of the S&P 500.

“That will have the biggest impact overall,” said Ms Schmidt. “It’s not sector-specific — it would hit everything.”

Such a move could increase the appeal of stocks overseas, after years of US shares outperforming other developed markets, said Chris Dyer, director of global equity at Eaton Vance, a US fund manager. “It’s prudent for investors to diversify away from what’s worked over the past decade,” he said.

Mr Biden’s other policies include support for a $15 minimum wage, which would probably crimp profits at retailers that rely on low-paid workers. But it is his policies on healthcare and clean energy, encouraged by the left wing of his party, that are drawing most attention. In April, Mr Biden announced a plan to expand Medicare, the national health insurance programme, and has backed efforts to renegotiate the price the government pays pharmaceutical groups for drugs under the scheme.

On Monday, Ron Wyden, a Democratic senator from Oregon, dropped his support for a revised version of a bipartisan drug pricing bill he co-sponsored last year. “The move shows that Democrats are growing increasingly confident of their chances of a sweep in the election,” analysts from research group Strategas wrote this week, alluding to control of the White House and both houses of Congress.

Mr Biden’s environmental push, which includes setting a target of net-zero emissions for the US by 2050, should boost clean energy stocks and exchange traded funds, estimates CreditSights, a debt-focused research firm.

Kristina Hooper, chief global markets strategist for Invesco, said a Biden regime would be “a real about-face for clean energy compared to the Trump administration”, which has rolled back rules that favoured the sector.

Trump vs Biden: who is leading the 2020 election polls?

One area, however, where investors would appreciate more clarity from Mr Biden is technology. Tech groups are some of the biggest companies in the stock market and the sector is the best performer this year, leading the rebound since the trough in March.

In recent years, social media giants have faced criticism over data protection and the hate speech posted to their platforms. This week US blue-chip companies joined an advertising boycott against providers including Facebook and Twitter.

Elizabeth Warren, the Massachusetts senator and former Democratic candidate for president, has previously called to break up Amazon, Google and Facebook under revamped antitrust rules. Mr Biden, meanwhile, has criticised Facebook over the misinformation on its platform but has been less clear on break-ups, beyond saying last year it was “something we should take a really hard look at”.

“Tech is the biggest question mark,” said Ms Hooper of Invesco. “It’s really unclear what would happen to tech under a Biden presidency.”

Some strategists are focused on possible shifts at the Federal Reserve, where officials have just helped the US market to record its best quarter since 1998, through a series of interventions that had the effect of boosting prices.

The Democratic party “would like the Fed to use more of its powers to be able to help the economy and make credit more available,” said Patrick Leary, senior market strategist at Incapital.