Warming Winter Cuts Off a Sweet Wine Tradition in Germany 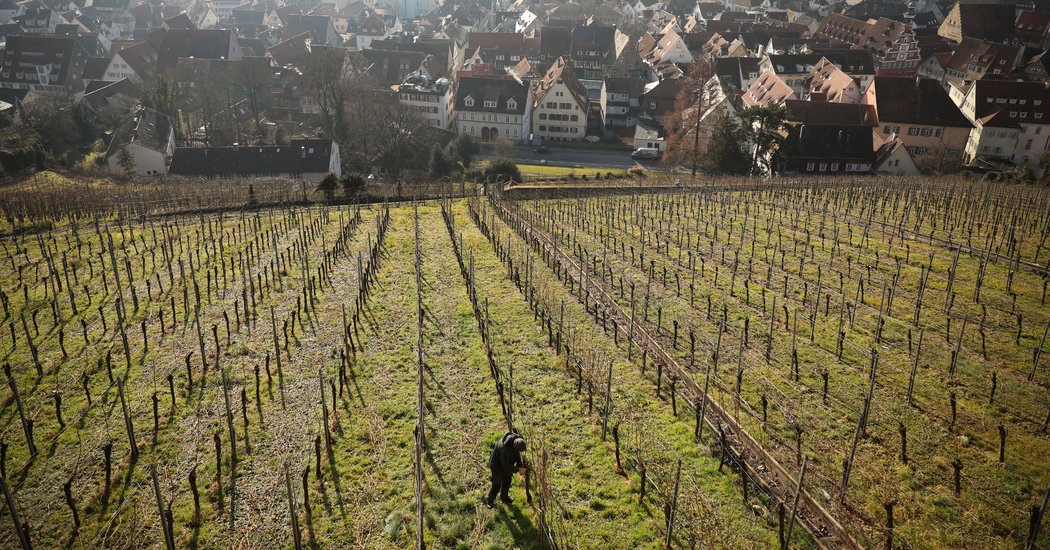 BERLIN — The tradition has persisted in what is now Germany for nearly two centuries, through wars, epidemics and revolutions. Before dawn on the bitterest of winter mornings, vintners harvest grapes that are frozen on the vine, pressing them before they thaw to produce a tiny quantity of exquisitely concentrated sweet white wine.

But this winter, for the first time the German wine industry can recall, a cold enough morning simply never came.

“This year will go in down in history,” said Ernst Büscher, a spokesman for the German Wine Institute, a trade group for German vintners that concluded last month that there would be no 2019 German vintage of the sweet specialty known as ice wine.

While climate change is causing uncertain and chaotic weather worldwide, Germany has experienced a clear trend toward warmer winters, according to Peter Hoffmann of the Potsdam Institute for Climate Impact Research. The changes have wreaked havoc with everything from winter sports to riverboat journeys.

According to the German meteorological office, this winter was the second mildest for the country since nationwide record-keeping began in 1881.

Though it represents about 0.1 percent of Germany’s wine harvest, ice wine is a beloved and closely watched premium product — and a test of winemaking skill.

“It’s like the icing on the cake,” said Ralf Bengel, who runs Schloss Vollrads, a winery about 15 miles from Wiesbaden in the west of the country. “It’s a wine that is used to represent our product.”

In Germany, ice wine is first mentioned in 1830, when a farmer in the Rhine region left a vat of frozen grapes to ferment and noticed that it was the basis for a very sweet, fine wine.

To yield the concentrated juice the style requires, water in the grapes must be frozen solid, which means they need to be harvested after several hours of temperatures at or below 19 degrees Fahrenheit (minus 7 Celsius), usually in the very early morning.

In 1982 the wine was given its own German “predicate” designation, meaning its production follows tight guidelines. Canada is now the world’s largest producer of ice wines, but the most famous (and expensive) come from Germany.

The German version has been increasingly rare and endangered for several years now.

This year, as it does every year, Schloss Vollrads left a few of its grapes — less than 1 percent — past the autumn harvest in the hopes of a particularly cold night. They were one of about 40 to 50 vineyards in the area to do so.

But as in the previous seven years, Mr. Bengel was unable to harvest suitable grapes. Schloss Vollrads is one of several vineyards having such troubles.

The dearth has led to a spike in prices, with a half-bottle of ice wine from the Schloss Vollrads going for at least 100 euros, or roughly $110. The rarity encourages vintners to keep trying to produce the wine, despite increasingly difficult conditions, according to the Wine Institute, which keeps a tally of those who leave grapes on the vine for the winter harvest.

“I’m old enough to remember the 80s, when we made very good ice wine year after year,” Mr. Bengel said.

“It could be an anomaly, but the longer you observe, the clearer the trend for warmer winter temperatures stands out,” Dr. Hoffmann said. “You see the temperature trend is pretty stable over time: There’s a rise of about 1 degree per 30 years locally.”

“Since 1988, we’ve been noticing that our main wine regions in Southwestern Germany have become significantly warmer,” Mr. Büscher said, speaking for the vintners.

Down the road from Schloss Vollrads, Alexander Jung runs Jakob Jung, a vineyard that has been in his family since 1799. The celebrate the birth of his child two years ago, Mr. Jung decided to try making ice wine after 10 years of sitting out the tradition. He was lucky: On a clear blood-moon night in January, the temperatures dropped enough for him and his crew to go out in the early morning to harvest.

The resulting 2018 ice wine is everything Mr. Jung had hoped. Best of all, according to Mr. Jung, it will age extremely well.