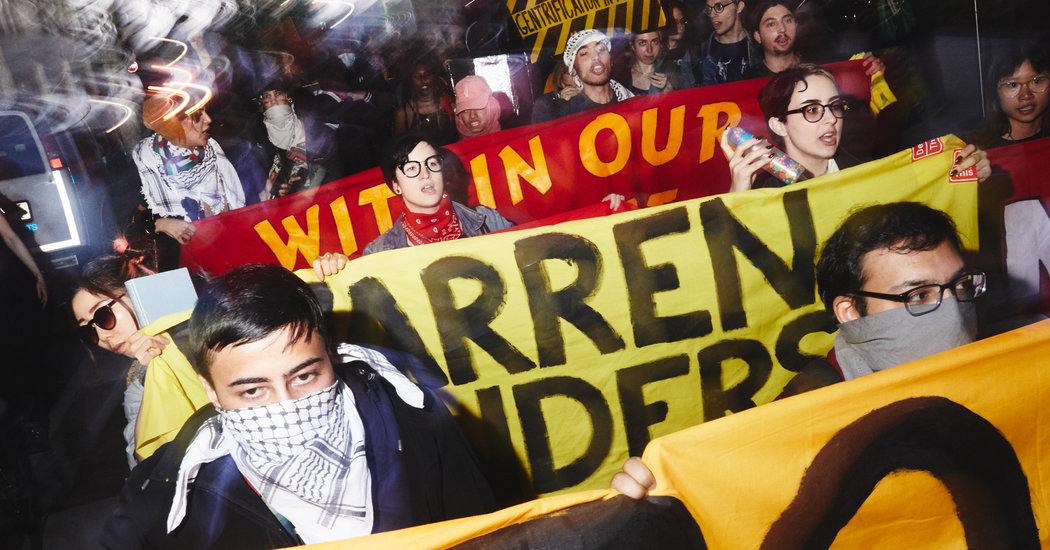 Warren Kanders, who stepped down as a vice chairman of the Whitney Museum of American Art last year after protests over his company’s sale of tear gas, announced Tuesday that he was divesting his company of divisions that sell “crowd-control solutions, including chemical agents, munitions and batons, to law enforcement and military agencies.”

The announcement came as Mr. Kanders and his company, Safariland, were once again drawing negative attention because tear gas manufactured by a division of the company has been used by law enforcement against people protesting the death of George Floyd.

The group that had led the Whitney protests, Decolonize This Place, has been calling out the company’s role on social media. One member of the group, Marz Saffore, said in an Instagram comment that Mr. Kanders and his company were “responsible for supplying tear gas to police in MN and all over the world.”

Among the complaints raised against Safariland during the Whitney protests was that its tear gas had been reportedly used against migrants at the United States-Mexico border.

Reacting to Mr. Kanders’s announcement, Eyal Weizman, the founder of Forensic Architecture, a group that aims to collect evidence of potential human rights violations, said: “Tear gas is a chemical weapon. We need to move beyond Kanders and use the momentum of the current protests to ban tear gas outright and worldwide.”

Mr. Kanders’s statement did not address the reasons for selling off the divisions of the company except to say that it allowed Safariland to focus on products like bulletproof vests that offer “passive defensive protection.” Mr. Kanders declined to comment further.

The statement did not express any concerns about the company’s role in supplying such materials to police departments and contained a statement of continuing support for law enforcement.

“As we look to the future, Safariland will continue to support public safety professionals in all lines of service as they risk their lives daily to keep the public safe,” the statement said.

Safariland, a Jacksonville, Fla.-based manufacturer of law enforcement and military supplies — including the bulletproof vests and tear gas, as well as bomb-defusing robots and gun holsters — has seen a drastic increase in demand from police departments because of the protests.

Under the planned divestment, the Safariland Group has agreed to divest two business segments — Defense Technology and Monadnock — that made tear gas and other crowd control products. The two segments are responsible for 6 percent of the company’s overall total revenue of roughly $500 million.

The transaction, expected to be completed in the third quarter of this year, is subject to customary conditions, according to Safariland’s announcement, such as ensuring it abides by regulations governing international trade and the transfer of operating licenses.

Additional terms were not disclosed, leaving uncertain the price of the deal, whether Mr. Kanders will receive continuing payments and whether he will continue to own stock.

Mr. Kanders’s presence on the Whitney board became a flash point last year that brought increasing attention to the question of where cultural institutions get their funding.

The art website Hyperallergic published photos showing Safariland’s name on metal canisters that were said to have been found where the American authorities used tear gas to disperse hundreds of migrants — including children — running toward a crossing from Tijuana to San Diego.

Protesters argued that tear gas from Mr. Kanders’s company had also been used against Palestinians in the Middle East and protesters in Egypt, Puerto Rico and Standing Rock, N.D.

The Whitney’s signature Biennial exhibition itself was part of the Kanders critique. Forensic Architecture, one of the exhibitors, presented a video work, “Triple-Chaser,” named for Safariland tear-gas canisters that tracked the deployment and health effects of the product.

Eight artists pulled out of the museum’s biennial exhibition and vocal demonstrators filled the museum’s lobby — at one point marching to Mr. Kanders’s Greenwich Village townhouse — demanding his resignation.

Mr. Kanders was angered by the way the protests were handled — he had not been informed about the Forensic Architecture video until the day it was installed — and his displeasure came through in his July 2019 resignation letter.

“The politicized and oftentimes toxic environment in which we find ourselves,” he wrote, “across all spheres of public discourse, including the art community, puts the work of this board in great jeopardy.”

Mr. Kanders, 62, joined the Whitney board in 2006, served on the executive committee for seven years, and donated more than $10 million to the museum. His wife, Allison, who was co-chairwoman of the museum’s painting and sculpture committee, resigned simultaneously with her husband.

Last month, the lawyer Neal Sher, once the Justice Department’s chief Nazi-hunter, filed a complaint seeking to remove the Whitney’s tax-exempt status on the grounds that it mishandled the protests against Mr. Kanders and pressured him to leave.