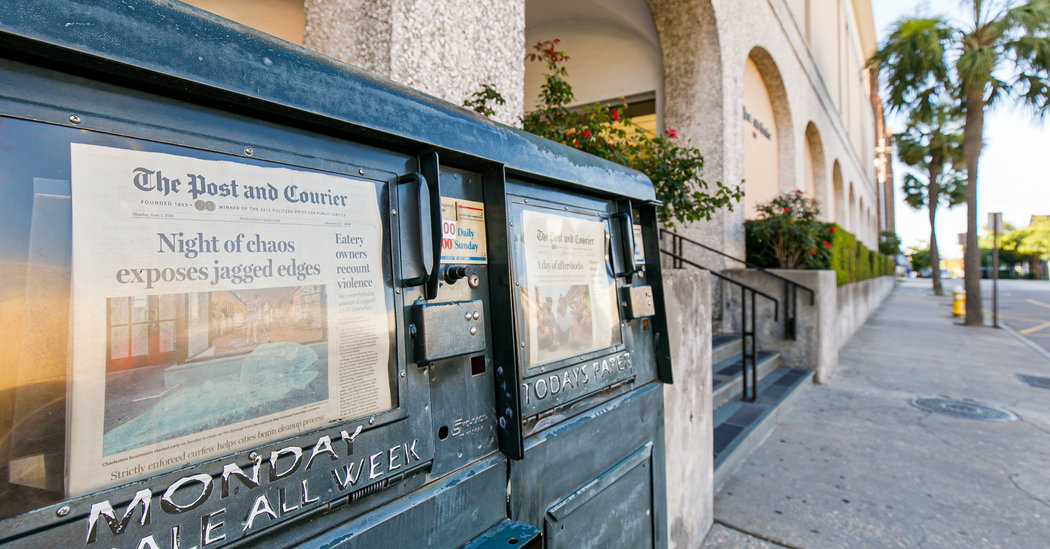 Staff members at one of South Carolina’s largest newspapers reported to the office on Monday after more than two months of working remotely. With the number of Covid-19 cases hitting new highs in the state, many of them said they were wary of going back.

Employees at The Post and Courier, a locally owned daily in Charleston with a paid weekday circulation of about 40,000, had been doing their jobs from home since the second week of March to guard against the spread of the coronavirus. Early last month, the publisher and the top editor announced a limited reopening, telling its more than 100 employees, including more than 60 journalists, to work at least one day a week in the office. On Monday, staff members were asked to return full time, and they complied, although some said they had concerns about potentially exposing themselves to the virus.

“I believe that the workplace is a safe place to be at the moment, but I understand why others are concerned,” Mitch Pugh, the executive editor, said in an interview. He added, “There’s also no question we do better when we can talk to each other.”

More than 12,400 Covid-19 cases have been reported in South Carolina, with 500 deaths attributed to the virus in the state. The seven-day average of new cases reached a high on Tuesday for the fifth day in a row, the paper reported.

As businesses across the country puzzle over how to bring workers back safely, The Post and Courier is requiring employees to get their temperatures checked at the entrance by a no-contact scanner. Anyone with a reading of 99.4 degrees or greater is not allowed into the building. Employees are encouraged, although not required, to wear protective masks while working indoors.

On Tuesday, staff members received a memo from Evening Post Industries, a Charleston company that owns The Post and Courier and other newspapers in the state. “Neither the state of South Carolina, nor Charleston County, nor the city of Charleston have a mandate in place, and therefore we cannot force people to wear masks,” the memo said. “Within the newspaper division, we strongly recommend wearing a mask to help keep each other protected.” The memo added that employees who felt uncomfortable about returning should use paid time off to stay away from the office.

Five newsroom employees said in interviews that they felt they were required to work in the office and were worried that the safety measures did not go far enough. The concerns of Post and Courier employees were previously reported by The Daily Beast and the media news website Poynter.

The staff members spoke to The New York Times on condition of anonymity. A few noted the firing of an audience engagement producer, Kristen Kornbluth, as an example of the consequences they could face for publicly criticizing their employer.

As part of her job, Ms. Kornbluth was charged with approving comments that appeared in a private Facebook group for subscribers, she said. On May 6, a reader submitted a comment expressing concern about the newspaper’s decision to have its employees go back to the office. The reader’s comment included a link to a May 1 Poynter article headlined “The Post and Courier is requiring staff return to the newsroom, leaving its reporters angry and frustrated.” Ms. Kornbluth, who said she shared the concerns, approved the comment.

“I knew it was going to be a provocative action,” Ms. Kornbluth said. “I did not think at all that it could lead to termination.”

She said she was called into Mr. Pugh’s office and fired. Mr. Pugh declined to comment on a personnel matter. In Ms. Kornbluth’s termination letter, which was reviewed by The Times, The Post and Courier called her approval of the comment “an immensely serious error in judgment.”

Thousands of journalists across the country have been laid off, furloughed or received pay cuts in the economic fallout related to the pandemic. Ms. Kornbluth said she thought her firing sent a message to colleagues at a time when jobs in the news media are scarce.

“I think that people are kind of worried that if they express any sort of dissent publicly, then this can happen to them, too,” she said.