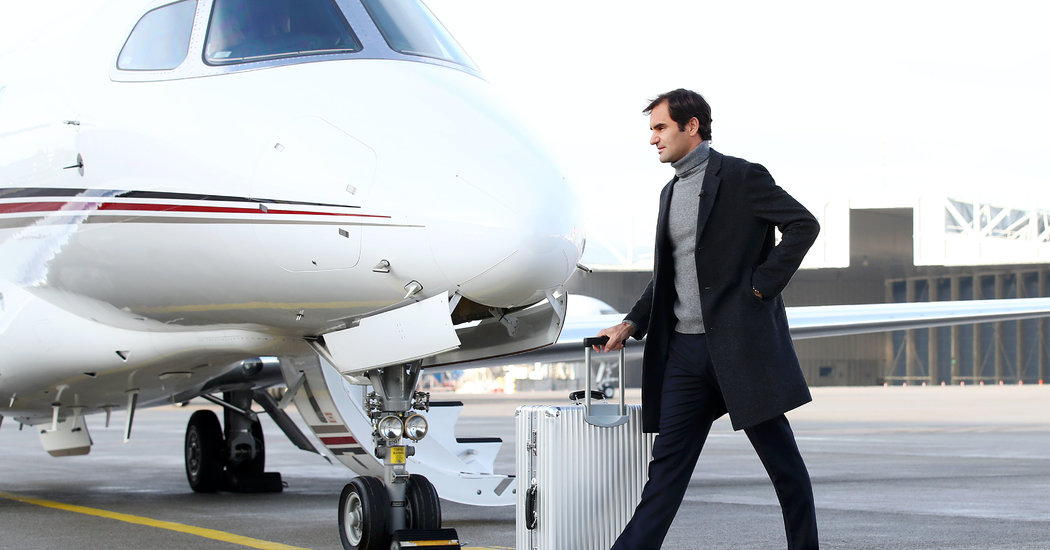 Commercial air travel has plummeted in the pandemic, but interest in private jet service is surging, particularly among people who have not paid to fly privately before.

For years, jet service providers have ferried corporate executives and wealthy leisure travelers who paid high fees for the privacy and security. Now, those same companies are shifting to meet rising demand from people worried about getting on a commercial flight.

Over the Memorial Day weekend, one of the busiest travel times in the United States in years past, traffic in the private jet industry was 58 percent of the volume from the same time last year, according to Argus, a company that tracks aviation data. But commercial flights fared worse over the holiday, plunging to 12 percent of the 2019 level.

Five weeks ago, private flights had fallen to 20 to 25 percent what they were the same time last year, said Doug Gollan, founder of Privatejetcardcomparisons.com, a research site for consumers. “Now to be back to 60 percent of pre-Covid levels shows the people who have access to private travel are getting back out there,” he said.

NetJets, the largest private jet operator in the world, is seeing a rush in interest from new customers, said Patrick Gallagher, its president.

“May is on track to be the best month of new customer relationships that we’ve seen in the past 10 years,” Mr. Gallagher said.

Competitors are experiencing the same rise. Magellan Jets has seen an 89 percent increase in new customers from mid-March to this past week, said Anthony Tivnan, its president. He added this was coming off a strong 2019, when the company’s revenue was up 34 percent from 2018.

Companies that carved out a niche with private international flights are also reporting an increase. Thomas Flohr, founder and chairman of VistaJet, which has longer range jets, said the company’s refueling landings in Anchorage, a major stop for transcontinental flights to Asia, were up 250 percent since the coronavirus outbreak.

“The number of fuel stops we had there in the last 60 days is unheard of,” Mr. Flohr said. “It was the East moving West, and then when the pandemic shifted, it was the West moving East.”

Unlike commercial airlines, the private jet industry sells its services by the hour. Private jets are faster and can fly directly to most airports, while flying commercial may involve connecting flights. Service providers make money by selling charter flights, jet cards with flight hours and fractional shares of jets and individually owned planes.

But as executives curtail their business travel during the pandemic, new wealthy fliers and existing customers are driving a private aviation boom. In some cases, they are actually flying and in others, they are stocking up on private flight hours. The desire is akin to hoarding toilet paper and flour at the start of the pandemic: The extra allotment provides peace of mind, even if it is never used.

“Everyone from boutique companies with five to six planes to NetJets is in a good mood,” Mr. Gollan said.

“There were a huge amount of people who had the wealth to fly private but never bought into the pitch of business efficiency,” he said, adding that wealthy people are now thinking less about the cost of flying privately then about the safety of flying commercially.

Marco Fossati, a member of the multibillion-dollar family that owns Star, the Italian food conglomerate, said he had little need to fly privately since he became less active in the family business. But the coronavirus caused him to rethink his plans.

“At this moment, with the Covid-19, if you can afford it, fly private,” he said from Miami, where he has been since the stay-in-place orders were issued in March.

Mr. Fossati’s stance illustrates a change from just a few months ago: The wealthiest are less concerned about the perception of flying privately.

Sentient Jet, a private aviation company that offers flight hours, reported that it sold 5,000 hours in April, or the equivalent of about $30 million in flying time, significantly more than the $25 million it sells in a typical month. More than 2,500 of those hours were bought by people new to private aviation.

Andrew Collins, chief executive of Sentient Jet, said three-quarters of his company’s flights since March had been by individuals and families, up from 40 percent before the pandemic.

Mr. Collins said he had not expected the increase. In the 2008 financial crisis, private flying fell off quickly and took years to rebound. But the current crisis was set off by health concerns, not the financial markets, and demand for private flying has continued.

In April, he expected to book 200 to 300 flight hours, but flight time was actually just under 1,000 hours. “We’re seeing 50 percent new customers,” he said, as people buy cards to use now or save for later.

Worries over the environmental impact of flying privately may have taken a back seat as well.

“Concerns about opulence and concerns about environmental issues are gone,” said Mr. Gallagher of NetJets. Many wealthy people put up with flying commercial because they had benefits like first class, TSA PreCheck and a status that allowed them various perks. “But now,” he said, “there are a lot of people out there who don’t want to fly commercial if they’re part of an aging population or have underlying health concerns.”

A person on the average commercial flight has about 700 points of contact with other people and objects, according to a recent analysis by the consulting firm McKinsey, but private flights have only 20 to 30.

For travelers concerned about the environment, the private jet companies offer programs to offset carbon emissions. Terrapass, which has partnered with Magellan, can calculate carbon offsets based on the size and age of a plane and where its flying. Magellan includes carbon offsets in jet cards greater than 50 hours.

New fliers may be driving some of the increase in sales, but existing clients are refilling their jet cards with more hours.

“We’re seeing members purchase larger increments, so someone at 50 hours is renewing at 75 hours,” said Mr. Tivnan of Magellan Jets. These fliers want to lock in availability for themselves and family members, should they need it, he said.

But tax breaks are available. The CARES Act, the economic stimulus package passed in late March, waived the 7.5 percent excise tax on all private jet flights and hours bought this year. That savings adds up. The same 25 hours on the Gulfstream 450 would have been $25,000 more expensive before the tax break.

Owners who put their planes into chartered service can also take advantage of tax exemptions. The 2017 tax overhaul allows an owner who uses a plane at least 50 percent for business purposes to deduct the entire purchase price in the first year of owning the jet. But that business purpose could be putting the jet into the market for other fliers to use.

Experts caution, however, that the supply may catch up to the demand.

The price for chartering a plane to fly in the United States — as opposed to buying flight hours — is low now. A one-way chartered flight from New York to Los Angeles, for example, would typically cost around $30,000 for a jet that seats eight people, said Jean De Looz, head of Americas for MySky, which helps jet owners manage costs. But that has fallen to $12,000 to $17,000.

“Operators are trying to get some cash flow,” he said, so they are offering cheaper rates.

But there are only so many private planes, and the number of people who want to use them is growing. If more people buy planes outright, fewer will be available for chartered service.

There are fewer than 1,300 planes for sale built in the last 20 years — the time frame that banks use in financing the purchase of a jet. “The numbers are tiny,” said Dan Jennings, chief executive of the Private Jet Company, a brokerage firm.

Of course, that type of economic imbalance is predicated on commercial aviation continuing to be hobbled by health fears. Even now, a billionaire like Mr. Fossati is weighing his options to fly from Miami to Switzerland. He is waiting to see what safety protocols will look like for commercial carriers, but he has also asked for quotes to fly on a private plane.

“Chartering a plane for two to three hours is one thing, but over the ocean, that’s very expensive,” he said. “Being rich doesn’t mean you have to throw away money.”