Welcome to the Second Quarter. Brace Yourself. 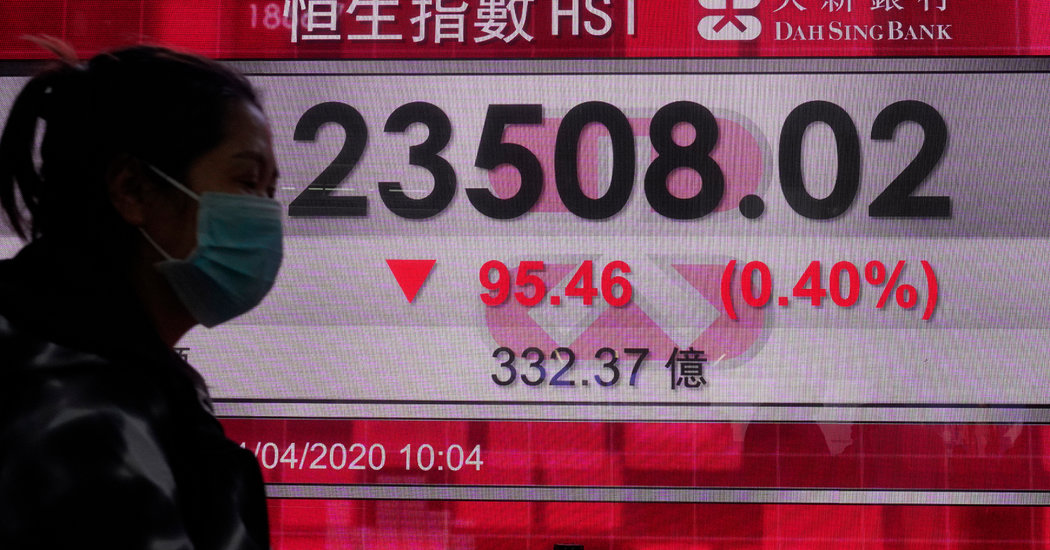 We are holding a conference call for DealBook readers tomorrow, April 2, at 11 a.m. Eastern. We will go behind the scenes of the Trump administration’s response to the coronavirus and what policy actions may come next. Our special guest will be Maggie Haberman, one of the NYT’s top White House correspondents. You’ll be able to ask Maggie about her reporting during the call, or submit questions in advance to [email protected]. For details about how to join, visit the R.S.V.P. page. This is the first in a weekly series of calls we’re calling the DealBook Debrief, featuring a wide range of experts in conversation with the DealBook team about the business and policy implications of the pandemic. (Want this in your inbox each morning? Sign up here.)

It’s going to be bad

For most stock markets around the world, the first quarter was one of the worst in history. The start of the second isn’t looking any better, with Asian and European markets opening lower and U.S. futures implying that they will follow suit.

The outlook for corporate earnings is bleak, with the average analyst forecast calling for a 10 percent year-over-year decline for S&P 500 companies in the second quarter, according to FactSet. This would be the first double-digit percentage fall in earnings since 2009. At the start of the year, analysts thought earnings would grow 6 percent this quarter.

Investors are spooked by the latest virus projections, especially in the U.S., where the government said yesterday that the death toll could reach 100,000 to 240,000, even with aggressive social distancing measures. A coming spike in cases and deaths will make for a “very, very painful two weeks,” President Trump said at a news conference.

With help from governments and central banks trying to shore up economies, companies have been on a borrowing binge, revealing haves and have-nots as markets become more discerning about which businesses they think can withstand a deep economic downturn.

Carnival’s $6 billion fund-raising plan is a litmus test for companies hardest-hit by coronavirus shutdowns. The cruise operator, whose ships were the sites of severe coronavirus outbreaks in the early stages of the crisis, is offering a mix of stock and bonds at distressed prices: A three-year bond is being marketed with a sky-high coupon of around 12 percent. The company was recently downgraded by ratings agencies and may not be able to resume operations for months. And since it’s incorporated in Panama, it cannot use U.S. government support measures in a straightforward way (if at all).

• The fate of companies like Carnival in the capital markets will be a sign of how investors are positioning themselves for an eventual economic recovery. This week, Yum Brands expanded its junk-rated bond offering because of high demand, even as one in seven of its Pizza Hut and K.F.C. restaurants around the world have been forced to close.

The biggest hostile takeover battle of the year is officially over, as Xerox ended a campaign to buy HP, citing the pandemic.

“The current global health crisis and resulting macroeconomic and market turmoil” created “an environment that is not conducive” to a boardroom fight, Xerox said. The company canceled its tender offer to buy HP shares on the open market and withdrew its effort to win seats on HP’s board.

It’s the latest sign of how the coronavirus is upending M.&A., a business that largely relies on boardroom confidence and market stability, neither of which is plentiful right now. (It’s also tricky to seal billion-dollar deals over Zoom calls.) The volume of transactions announced in the first quarter fell 28 percent from the same time a year ago, according to Refinitiv, while the number of deals fell 14 percent.

• Deal makers have told Michael that transactions that have a compelling business case and were already in the process of completion will probably still go through. That apparently includes the $17 billion merger of Caesars and Eldorado, the casino giants. But deals in the earlier stages, or those that are harder to defend to investors, are likely to be put on hold.

As companies around the world grapple with the pandemic, the World Economic Forum is urging corporate leaders to protect all stakeholders. We have an exclusive look at a missive from Brian Moynihan, Bank of America’s C.E.O., Klaus Schwab, the forum’s founder and executive chairman, and others.

In an email sent late last night to 140 C.E.O.s, they urged business chiefs to adopt a set of “Stakeholder Principles in the Covid Era” to manage the economic impact from the public health emergency. The principles will be presented to 450 more global executives today. Among them are keeping employees safe, maintaining fair prices, working with governments and keeping supply chains open.

• Interestingly, a commitment to shareholders — maintaining “the long-term viability of the company and its potential to create sustained value” — is last on the list.

The group also urged staying committed to sustainability efforts, including the Paris climate agreement and the U.N. Sustainable Development Agenda. (The plea comes as the Trump administration announced its latest rollback of auto emissions and fuel economy standards.)

“As business leaders, we pledge to stand at society’s service,” the group wrote.

Few companies are better positioned than Amazon to flourish in this crisis, as customers increasingly rely on deliveries from the “everything store” in an age of government-mandated lockdowns. But the company is combating challenges on all sides, from logistics to worker protests.

“Amazon has a chance to be the hero” of the coronavirus pandemic, Eric McNulty, a crisis leadership expert at Harvard, told the FT. Researchers point to its vast web of warehouses and delivery services — “the most sophisticated logistics ecosystem ever created,” in the FT’s words — as invaluable assets.

• Some perspective: Amazon has 277 million square feet of logistics space, excluding offices and cloud-computing data centers. It also had nearly 800,000 employees worldwide as of Dec. 31, excluding contractors and temporary workers, and is looking to hire more.

Yet Amazon is struggling with colossal demand, the WSJ reports. Order volumes currently match the year-end holiday season, while at least one delivery center has been processing up to 40 percent more packages than normal for this time of year.

And then there are employee shortages, owing to both the coronavirus and unhappiness with working conditions. The WSJ reports that some warehouses have had to operate with half their usual number of workers. And employee unrest has exploded into public view with a walkout at a New York City warehouse and a “sickout” at the company’s Whole Foods grocery chain.

• The company has responded with increased benefits, including more time off and paid sick days, to help allay worker concerns about having to work in packed warehouses and in a system that prioritizes efficiency.

The company recognizes the gravity of the moment. Jeff Bezos, its C.E.O., recently wrote that he was focused on Amazon’s coronavirus response and was speaking with government officials and the W.H.O. But Mr. McNulty points out that the company “could end up the villain if they wind up putting people in harm’s way.”

• Representatives for private equity firms and venture capitalists — as well as Speaker Nancy Pelosi — are lobbying Washington on behalf of portfolio companies, many of which don’t qualify for aid in the stimulus bill. (FT, Protocol)

• Responsibility for saving the U.S. economy is coming down to two men: Treasury Secretary Steven Mnuchin and the Fed chairman, Jay Powell. (NYT)

• Joe Biden said it was hard to imagine the Democratic National Convention going forward as planned in mid-July, but thinks the November elections are still on track. (Politico)

• The videoconferencing company Zoom and the messaging app Slack are seeing huge upticks in use. Can they hold onto those gains? (Bloomberg Opinion)

• Amazon and Walmart are said to have temporarily suspended affiliate marketing deals with digital media companies. (The Information)

• Natural-gas fracking once shored up Pennsylvania’s economy. Its collapse could hurt it. (NYT)

• The struggle is real for TV anchors broadcasting from home. (WSJ)