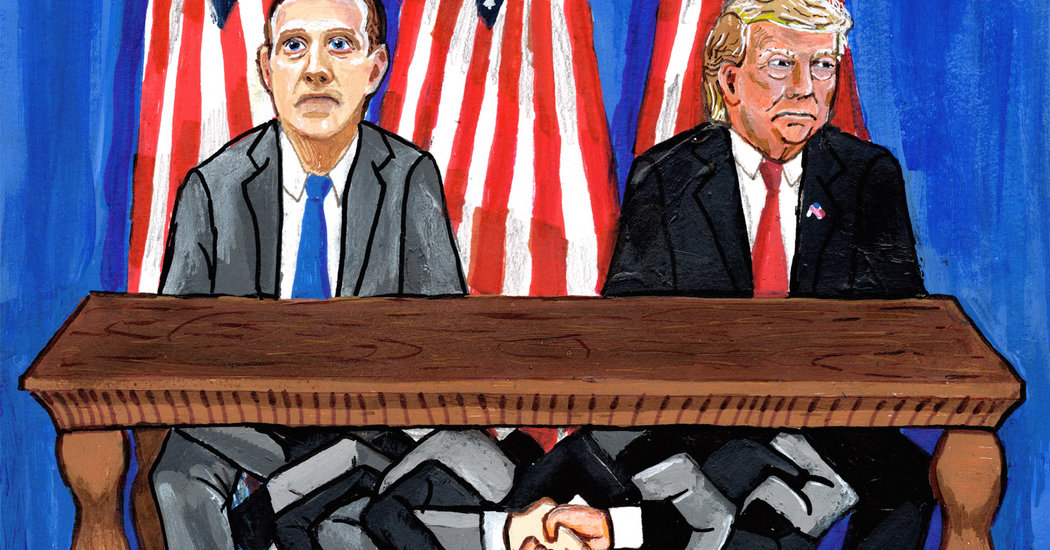 Mr. Trump’s administration has reciprocated. The Justice Department is currently conducting antitrust investigations of the tech giants. But while Google and Amazon face “mature investigations,” the Facebook inquiry is “not real at all,” a person who has been briefed on the investigation said. And Facebook has acted like a company with no worries in Washington. It has continued to acquire companies, as Mr. Isaac reported last week, and moved to allow users to send messages between Messenger, WhatsApp and Instagram — a merging of the services that could further fuel monopoly concerns. (Facebook’s view is that it’s far less dominant in any market than the other big tech companies and has less to worry about than Google or Amazon.)

The summer of 2020 is one of those moments when corporate Washington starts to panic. What had looked like deft Trump-era politics now looks like exposure and risk. Top Democrats, including Joseph R. Biden Jr. and Nancy Pelosi — who was infuriated when a distorted video of her went viral — have singled out Facebook as a bad actor. Mr. Trump is, at the moment, viewed by Washington’s insider class as likely to lose in November, though Mr. Biden poses less of a threat to Facebook than Senator Warren would have.

While executives across Facebook insist that Mr. Zuckerberg’s position on free speech on the platform is a matter of long-term planning and principle, not political expediency, his political team also recognizes that they are badly out of position for a Democratic administration. And in recent days, Facebook has been eager to show its independence from the White House. The company has been unhesitatingly enforcing existing policy against Mr. Trump’s posts, and has been quick to point it out to the media, as it did last Thursday, when a Trump ad used a symbol associated with Nazi Germany.

Mr. Zuckerberg has not budged, however, on his core insistence that Mr. Trump should be able to say what he wants on the platform, and most of what he wants in ads — including false statements, as long as they aren’t misleading on specific, narrow topics, like the census. But he did reportedly tell Mr. Trump that he objected, personally, to Mr. Trump’s warning that “when the looting starts, the shooting starts.” And he and Ms. Chan wrote to scientists funded by their nonprofit organization that they were “deeply shaken and disgusted by President Trump’s divisive and incendiary rhetoric.”

Those gestures may have appeased Facebook’s work force, but they’ve gone largely unnoticed in Washington.

“All the big companies tacked to the right after Trump won, and Facebook probably moved farther than the others,” said Nu Wexler, a Democrat who worked in policy communications for Facebook in Washington. “But the politics of tech are changing, and companies should be worried about Democrats as well. The days of just keeping the president happy are over.”