When Shoppers Venture Out, What Will Be Left? 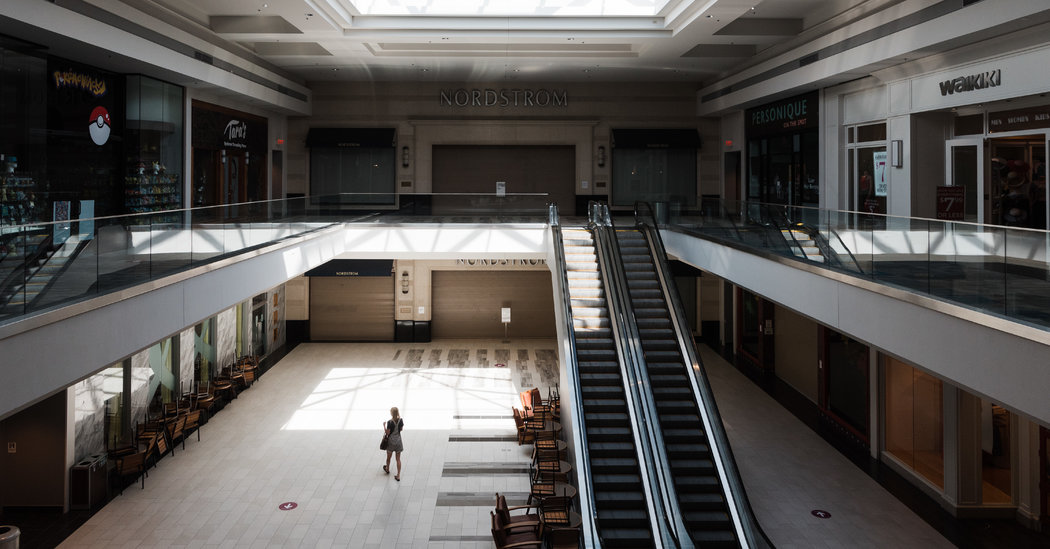 The coronavirus pandemic dealt another crushing blow to retailers in April. Now the question is what the sector will look like as the economy reopens — and how much permanent damage has been inflicted.

Retail sales fell 16.4 percent last month, the Commerce Department said Friday, by far the largest monthly drop on record. That followed an 8.3 percent drop in March, the previous record. Total sales for April, which include retail purchases in stores and online as well as money spent at bars and restaurants, were the lowest since 2012, even without accounting for inflation.

Some of the declines in individual categories were staggering. Restaurants and bars lost half their business over two months. At furniture and home furnishings stores, sales were off by two-thirds. At clothing stores, the two-month decline was 89 percent. Increased sales from online retailers didn’t come close to offsetting the downturn elsewhere.

April could prove to be the bottom for sales. The March figures were helped in part by panic buying, and stores were generally open for the first half of the month. Most states have begun to lift barriers to commerce and movement, and many economists expect spending to rise in May as people venture out.

But in contrast to the nearly vertical drop, any rebound is likely to be gradual. Big states like New York and California remain largely under lockdown, and businesses face significant restrictions elsewhere. Even as businesses reopen, there is no guarantee that customers will return in numbers previously seen.

“It’s probably fair to say the worst is over in terms of a collapse, unless there are waves of new outbreaks,” said Jim O’Sullivan, chief U.S. macro strategist for TD Securities. “But how fast does it come back? The short answer is none of us really know.”

Surveys show that many Americans still fear the virus and are wary of crowded places. Epidemiologists and public health officials say those concerns are well founded: Anthony S. Fauci, the government’s top infectious-disease expert, told a Senate committee this week that rushing back to normal life could “trigger an outbreak that you may not be able to control.”

Even if Americans feel comfortable returning to stores, they may not have as much money to spend, since millions have lost their jobs.

“Consumers are definitely feeling anxious about the future,” said Jay Sole, a retail analyst at UBS. “Whether it’s the pandemic, which is making people hesitant to go out in public to crowded places, or they’re worried about their jobs or the state of the economy going forward, people’s willingness to spend has declined.”

There are signs that the downturn has left lasting scars on a retail industry that was already struggling. J. Crew and Neiman Marcus have filed for bankruptcy protection, and other big retailers like J.C. Penney, which employs nearly 85,000 people, are expected to follow.

Small businesses are being hit even harder. In a survey released by the Census Bureau on Thursday, nearly 90 percent of small retailers reported being hurt by the pandemic, and few said they expected a quick rebound. A third said they thought it would take more than six months for business to return to normal, and 6.6 percent said they did not expect a full recovery.

The plunge in sales, especially in areas like clothing, has shown how reliant many retailers have remained on physical outposts, even as the internet has upended the shopping landscape. J. Crew said in its bankruptcy filing that it expected to lose almost $900 million in sales because of the temporary store closings. The retailer’s most recent annual sales were about $2.5 billion.

Mr. Sole anticipates 100,000 store closings by 2025 as the pandemic accelerates the shift to online sales, according to a recent report, with the biggest cuts in apparel, consumer electronics, home furnishings and groceries.

The pandemic has forced retailers to quickly adapt to a fully digital environment and speed up some investments that may have otherwise taken place over several years, said Joel Bines, managing director at AlixPartners, a consultancy and restructuring firm. That goes beyond their website operations to online ordering for curbside and store pickup, appointment shopping, partnerships with Instacart or Postmates, and other initiatives, he said.

“Anything that puts digital into the transaction — that acceleration is a direct result of this,” Mr. Bines said.

Still, for all the grim economic news, there are hints of a rebound as retailers race to resume business with masked employees, plexiglass guards and hand-sanitizer stations. Macy’s and Gap Inc. are among retailers that have announced aggressive plans to reopen stores in coming weeks, as has the Simon Property Group, the nation’s biggest mall operator.

Data from Placer.ai, a company that uses mobile phone data to analyze foot traffic, shows that activity has picked up, although it is not close to levels before the pandemic.

“There are so many unknowns still, but we’re definitely seeing things trending back toward normal,” said Ethan Chernofsky, vice president for marketing for Placer.ai. “There’s a potential light at the end of the tunnel.”

Some companies are easing into the reopening. American Eagle Outfitters, the teen retailer that also owns the underwear chain Aerie, hired a medical director in mid-March to advise it on bringing employees back to its stores and Pittsburgh headquarters, and has reopened more than 200 locations this month. The company has viewed online purchasing and pickups at stores or outside malls as a good transition for consumers wary of the full-on mall experience, said Andrew McLean, the company’s chief commercial officer.

“We’re finding that’s a great gateway into retailing for consumers who might want to get out and see the mall but aren’t necessarily there yet from a safety standpoint,” he said.

The retail collapse is both a result of the economic crisis and a major contributor to it. Plunging sales mean less tax revenue for cities and states, delayed rent payments for landlords, and lost business for manufacturers, trucking companies and thousands of other businesses. More than anything, it means lost jobs: The nation’s second-largest private-sector employer, after health care, the retail industry cut 2.1 million jobs in April.

Angela Sherbanee was caught in the first wave of layoffs. She worked at Dylan’s Candy Bar inside the Mohegan Sun casino in Connecticut; the casino closed in mid-March, and the store along with it. She has been out of work for close to two months.

“It’s very scary right now because I don’t know how the casino is going to open back up,” she said.

Ms. Sherbanee, 55, is technically on furlough. But she is skeptical she will be able to return to work soon, if at all. One of her daughters, a college student who worked part time at a Levi’s outlet inside a different casino, has been told that her own furlough will turn into a layoff at the end of the month. The only member of the family who is working is her younger daughter, a high school senior employed at a pizzeria, where business is booming amid the lockdown.

“Who would’ve thought that the 18-year-old who’s working at the pizza place is an essential worker?” Ms. Sherbanee said.

The drop in consumer spending might have been even steeper had it not been for the trillions of dollars in emergency funding approved by Congress. Credit and debit card transaction data analyzed by economists at Harvard and Brown Universities shows a significant increase in spending in mid-April, when $1,200 stimulus checks began arriving in bank accounts.

“That’s the stimulus doing what it’s intended to do, providing a little bit of a lift to households,” said Robert Rosener, senior U.S. economist at Morgan Stanley.

Expanded unemployment benefits have helped soften the blow for workers who have lost jobs — at least those who have been able to file for benefits. Researchers at the Brookings Institution estimated this week that unemployment insurance replaced half of lost wages in April.

For Laura Campbell, a manager at Half Price Books in Renton, Wash., being laid off was an emotional blow but not, at least in the short term, a financial one. Because of the extra $600 per week being paid to unemployed workers right now, Mx. Campbell — who uses the gender-neutral title “Mx.” and plural pronouns — is making more than the $16.05 hourly wage at the bookstore.

“I have been able to pay off two credit cards,” they said.

Still, the experience has exacerbated Mx. Campbell’s longstanding concerns about the future of retail. Even before the pandemic, workers often asked one another how long the business could continue in the Amazon era. And while not expecting physical retail to disappear overnight, Mx. Campbell doesn’t plan to wait to find out: They will start a new job, at a local tech company at the end of the month.