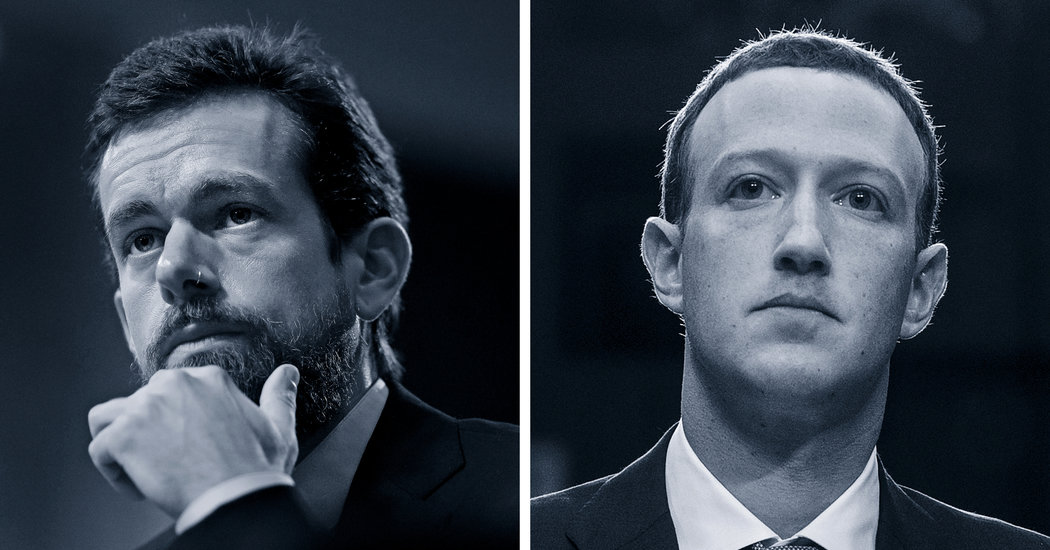 SAN FRANCISCO — Earlier this week, as Twitter executives waded into a confrontation with President Trump, Mark Zuckerberg, chief executive of Facebook, took a very different tack: He kept his head down.

Jack Dorsey, chief executive of Twitter, took to his site not long after to say Twitter would not back down, presenting a stark contrast to Mr. Zuckerberg, who, in an interview a day earlier with Fox News, said Facebook wasn’t going to judge Mr. Trump’s posts.

“We’ve been pretty clear on our policy that we think that it wouldn’t be right for us to do fact checks for politicians,” Mr. Zuckerberg said. “I think in general, private companies probably shouldn’t be — or especially these platform companies — shouldn’t be in the position of doing that.”

Mr. Zuckerberg’s reminder that Facebook would not interfere with posts from Mr. Trump — even if they violate rules that would apply to other people — was in part the product of his longtime belief that his company should avoid getting into the political fray and let its three billion users have their say.

His assurance that his company would not be an “arbiter of truth” in political discussion was also indicative of an aggressive effort over the last year or so to court Republicans in Washington and conservative voices in the media. The goal: to keep regulators off his giant internet company’s back.

By staying on the sidelines as Twitter does battle with Mr. Trump and his allies, Mr. Zuckerberg could gain unlikely Republican friends to stave off regulatory intervention into his business, which lawmakers around the world have threatened for more than a year.

Many people in the tech industry believe regulators — not economic collapse brought on by the coronavirus pandemic or any other problem — are the one existential risk to Mr. Zuckerberg’s business.

“Zuckerberg’s instincts have been right,” said Brendan Carr, a Republican commissioner at the Federal Communications Commission. “Zuckerberg said, ‘We trust people to make up their minds.’”

But Mr. Zuckerberg’s hands-off approach to Mr. Trump’s increasingly incendiary behavior on social media runs the risk of alienating some users who think the rules about what can be posted to Facebook should be applied equally to everyone, including world leaders. It could also infuriate some of the company’s Silicon Valley work force, who still believe Facebook isn’t doing enough to counter misinformation campaigns.

And it could lend more ammunition to critics who say Mr. Zuckerberg is still unwilling — or unable — to own up to his company’s role in disseminating information to the world, particularly when many news organizations are collapsing.

“Twitter and Facebook both have community standards and policies to combat voter suppression, hate and the incitement of violence, and yet Twitter is actually enforcing those standards against the president of the United States and Facebook is doing nothing,” said Vanita Gupta, the president of the Leadership Conference of Civil and Human Rights. “The harm from this approach by Facebook is mass confusion, voter suppression and possible violence.”

Twitter has started to experience the repercussions of taking on the White House. Several Republican lawmakers and regulators argued — on Twitter — that Twitter was being hypocritical because it was focusing on Mr. Trump while allowing other world leaders to spread lies.

“I’m filing a complaint with the Federal Election Commission because of Twitter’s domestic election interference against President @realDonaldTrump,” Representative Matt Gaetz of Florida said in a tweet.

After Twitter applied the warning label on a tweet from Mr. Trump on Friday morning, Ajit Pai, the F.C.C. chairman, called on Twitter to apply its rules against inciting violence equally to other world leaders. He provided a link to to anti-Israel tweets from Iran’s supreme leader.

That kind of confrontation is exactly what Mr. Zuckerberg, who controls a far larger internet megaphone than Mr. Dorsey, wants to avoid. In a speech at Georgetown University in October 2019, Mr. Zuckerberg declared that political speech would be protected on Facebook, including lies made by politicians on the site.

“Twitter is doubling down and they are showing how amazingly bad they are at the politics on this,” said Rachel Bovard, a senior adviser to the conservative Internet Accountability Project and a former aide to Republican senators Mike Lee of Utah and Rand Paul of Kentucky. “Republicans want social media to be a pass-through, a billboard. They believe bad speech will be countered by good speech and that is what Zuckerberg is saying he will do.”

In truth, Facebook’s and Twitter’s rules are not all that different. Both companies have said they would take down posts, even from a president, if they contained threats and incitement to violence or attempts to suppress voter turnout or citizens’ ability to participate in elections.

But when it comes to political discussion and advertising, the companies have diverged over the last year.

Mr. Zuckerberg’s courtship of conservatives has been aided by Joel Kaplan, a former aide in President George W. Bush’s administration and a well-connected Washington operative. Mr. Zuckerberg and Mr. Kaplan have tried to convince Republicans that although Silicon Valley may be largely left-leaning, Facebook’s platform itself is neutral.

Last year, Mr. Zuckerberg dined with top congressional Republicans, including Senator Josh Hawley of Missouri and Senator Lindsey Graham of South Carolina. The Facebook chief also met with conservative journalists like Tucker Carlson of Fox News. And in a dinner with Mr. Trump last fall, Mr. Zuckerberg flattered Mr. Trump’s standing as the public figure with the “most engaged following” across all of Facebook.

Courting conservatives seems to have helped Facebook in Washington, but the strategy has not been entirely embraced by the company’s employees.

Some have long believed that a double standard applies to conservatives on the platform. In discussions posted to the company’s internal message boards and privately between employees on Friday, workers wondered what the final breaking point will be for Facebook to enforce its rules evenly, according to three people familiar with the company’s internal deliberations.

Mr. Zuckerberg’s attempts to avoid the political fray face additional challenges. Democrats are criticizing Mr. Zuckerberg’s unwillingness to enforce its policies, while Republicans are embracing an executive order handed down by President Trump that could make tech companies — including, and especially, Facebook — liable for the content that appears on their platforms.

“They’re not neutral platforms, they are publishers, the most powerful publishers in the world,” said Mr. Carlson in a monologue delivered on his show Thursday evening. “It empowers a handful of tech monopolies to the detriment of everyone else.”