Who Should Wear Masks on Planes? More Airlines Say Everyone. 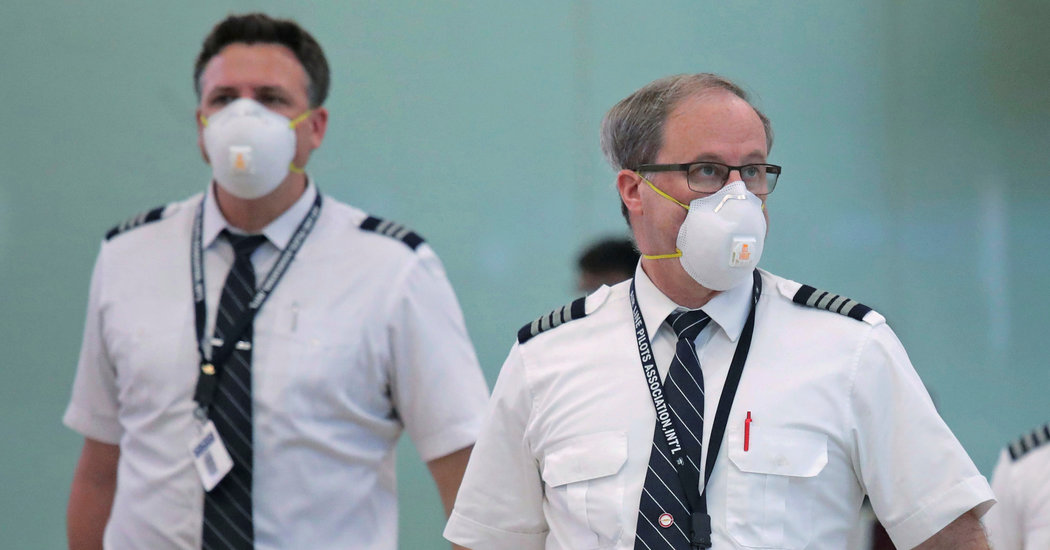 After flight attendants and pilots criticized them for not doing more to protect employees, large airlines in the United States and around the world announced this week that they would require their crews to wear masks. Some went even further and said passengers would have to do so, too.

American Airlines and Delta Air Lines said on Thursday that they would start requiring all passengers to wear a face covering in the coming weeks, a policy that will apply to their flight attendants, too. They join Lufthansa Group — which owns its namesake airline, Swiss International Air Lines and Austrian Airlines — as well as JetBlue and Frontier Airlines, all of which made similar announcements this week.

Southwest Airlines said this week that its flight attendants would soon be wearing masks, joining United Airlines, which announced a similar policy late last week. Both airlines said they would “strongly” encourage customers to do the same.

As some states begin to relax or lift stay-at-home orders, lawmakers and unions representing flight attendants and pilots have stepped up calls for industrywide rules on masks to protect flight crews from passengers — and passengers from one another.

Airlines have been slow to require masks in part because they’ve been hard to come by. Early in the pandemic, many companies promised to make masks available for employees who wanted them, but some pilots and flight attendants complained that they were not always available.

“Things have changed rapidly in just two or three weeks,” Robert Isom, president of American Airlines, said in a call with journalists on Thursday. “As we take a look forward with sanitizer, we see ample supplies. With masks, it is a logistical issue of getting inventories to the right place, but we have sufficient quantities for our team.”

It will be several weeks before the airline can distribute enough sanitizer and masks to offer them to all passengers who want them, Mr. Isom said.

On Wednesday, the chairman of the House Transportation and Infrastructure Committee, Representative Peter A. DeFazio, asked the head of the Federal Aviation Administration, Stephen Dickson, to require masks and take other steps to protect travelers and crews. It is “essential” that passengers wear masks and airlines space out seats, said Mr. DeFazio, an Oregon Democrat.

Two Democratic senators, Edward J. Markey of Massachusetts and Richard Blumenthal of Connecticut, urged the Transportation Department and the Department of Health and Human Services to put similar rules in place.

“The need for an emergency rule requiring face masks for all individuals engaged in air travel is both clear and urgent,” the senators wrote in a letter.

The push for a federal mask requirement has been largely driven by labor unions. In a letter last week, the Association of Flight Attendants union, which represents workers at 20 airlines, including United and Frontier, asked the transportation and health departments for an emergency regulation on masks for passengers.

Over the weekend, the union’s president, Sara Nelson, posted a photograph on Twitter, which was widely shared, showing a packed American Airlines plane with some passengers who were not wearing masks.

“ENOUGH! This was TODAY on a four hour flight. This is not okay,” Ms. Nelson wrote.

So far, the Trump administration has resisted a mask mandate.

In a statement, the F.A.A. said that Mr. Dickson had shared Mr. DeFazio’s concerns and that the agency expected airlines to follow guidance from the Centers for Disease Control and Prevention. The Department of Health and Human Services referred a request for comment to the C.D.C., which repeated its general recommendations.

Studies have shown that people who don’t display symptoms of the virus can infect others. That’s why the C.D.C. recommends that masks or face coverings be worn in “community settings,” such as grocery stores, pharmacies or the confines of an airplane.

“If you’re trying to control spread of a disease in a community, your most effective means is to control it at the source,” said Dr. Henry Wu, director of the Emory TravelWell Center in Atlanta, which provides health services for international travelers. “For an infectious disease, it would be the ill individual, primarily the ill individual who doesn’t realize they are ill.”

Since the start of the pandemic, airlines have regularly pointed to the quality of their air filtration systems, which filter and recirculate the air in the cabin every few minutes. Such systems are “quite good,” Dr. Wu said, but they can’t eliminate contagion.

“If you are sitting within six feet of others, obviously there are some immediate-proximity issues that even filtration systems can’t address,” he said.

For many flight attendants, the risk of infection has been mitigated by the nearly complete drop-off in air travel.

While some flights, like the one photographed over the weekend, remain busy, most planes are flying virtually empty. But it won’t remain that way for long. Since early March, airlines have sharply cut schedules, funneling the few people still traveling onto fewer flights. And some early data suggests that the air travel might be past its lowest point of the crisis.

“Whisper it quietly, but we may have reached the bottom,” John Grant, a senior analyst at the aviation data provider OAG, wrote this week. “Scheduled airline capacity has increased for the first time in nearly 10 weeks, and perhaps reassuringly those green shoots of recovery are in more than one market.”

Unlike the United States, Canada started requiring face coverings for passengers last week. That came as a relief to Yvette Nakamoto, a flight attendant with Air Canada who had been working through the pandemic, flying regularly between her home base in Calgary to Toronto and Vancouver.

Ms. Nakamoto said she wondered what had taken Canadian officials so long to require masks. She has other questions, too. “Why aren’t they taking temperatures?” she asked. “You go into a grocery store, it takes five seconds.”