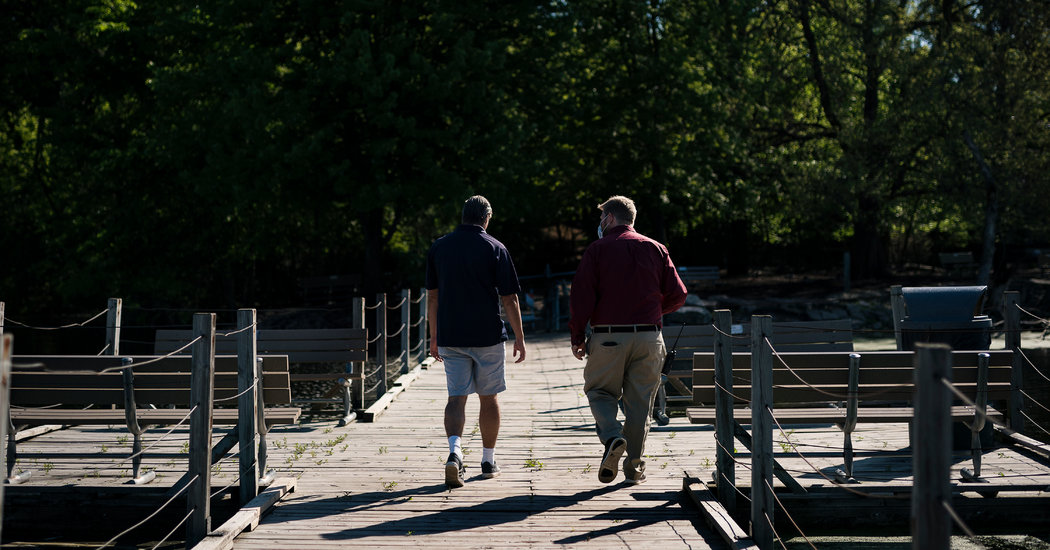 WASHINGTON — The governor of Pennsylvania wants to hire two million unemployed workers to help the state track the spread of the coronavirus in the fall.

City Council members in Austin, Texas, voted to pay people to help with projects like preparing land for fire season.

And in Green Bay, Wis., the city hopes to pay the out-of-work to fix a decades-old rotted boardwalk in a major recreation area.

Across the country, officials in state and local governments are considering ways to directly hire their out-of-work constituents, hoping that they can pay them to clean up parks, assist in conservation efforts and form the backbone of the public health response to the virus.

The programs so far are likely to enable only a small number of jobs, in some cases just a handful. But local officials say they are hopeful the idea can persuade other areas to try similar efforts and, more important, elicit additional funding from Congress to support local job creation.

The effort is aimed at helping communities deal with an unemployment crisis more severe than what the nation faced at the worst moment of the Great Depression. Tens of million of workers have lost their jobs since mid-March, when the pandemic forced consumers into their homes and shut down most businesses. New unemployment claims have topped one million for 13 straight weeks.

So far, lawmakers and governors have mostly pushed for policies that will ensure Americans can go back to the jobs they held before the pandemic. The federal government allocated $660 billion for forgivable loans to businesses that agreed to keep workers on the payroll. Republican lawmakers have said they are interested in providing bonuses to people that return to work in lieu of extending expanded unemployment benefits, which are set to expire on July 31. And states have pushed to quickly reopen workplaces so that employees can regain a paycheck.

But overall unemployment remains high and experts estimate that a large percentage of layoffs caused by the virus-related lockdowns could become permanent the longer the pandemic persists, as businesses fail to attract the number of consumers they did before or shut down entirely.

In some states and cities, one emerging answer to the growing jobless problem is simple: hire those workers directly, sometimes using federal funds.

When the City of Green Bay received almost $600,000 in funding from the $2 trillion stimulus package passed earlier this year, it decided to spend $136,000 on a jobs program to address projects in the 2,500 acres of land managed by its parks department.

“We worked very closely with our parks department director to designate some of the things that we could put people to work on immediately,” said Eric Genrich, the city’s mayor.

The program will be able to employ roughly 20 people full time and more in the event that the jobs are part time.

An outdoor wildlife sanctuary in Green Bay, has a wooden boardwalk built 20 years ago with boards that are rotting out. Mountain bike trails need to be groomed. The city’s wildlife sanctuary is struggling with an infestation of garlic mustard, an invasive plant.

Last month, the Austin City Council approved a resolution to create a program that will pay unemployed residents to work on conservation projects.

“What I love about the way that we’re approaching this is that it’s not only about the immediate but it’s a program that can evolve over time,” said Alison Alter, the City Council member who proposed the idea. “We already have interest from our county in potentially engaging with us.”

Austin officials believe they can use the money they obtained through the stimulus package to fund work on private land, like preparing for wildfire season, but they hope Congress will clarify what funds can be used for projects on public property.

Gov. Tom Wolf of Pennsylvania has said he will create a Civilian Coronavirus Corps to employ two million people doing contact tracing, the intensive process of mapping out the virus’ spread in order to contain it. Mr. Wolf has provided few details about the program, but he has said he hopes the federal government will pay for it. His office declined to comment further.

The efforts come as state and local governments are confronting their own potential unemployment crisis. With higher health costs and lower tax revenue, some cities and states have furloughed or laid off workers. The National League of Cities has estimated that up to a million public sector jobs may be at risk.

In April, Pennsylvania stopped paying thousands of employees who could not telecommute, according to The Philadelphia Inquirer. Austin has a hiring freeze, an aide to Ms. Alter said. In early June, Mr. Genrich said Green Bay had so far avoided laying off or furloughing any city workers.

But with the pandemic continuing longer than many had expected, local leaders have asked Congress to step in and fill the gap in revenue left by falling tax receipts.

In New York, for example, a group of Democrats in the state legislature have proposed a work program for roles in public health, conservation and clean energy. The administration of Gov. Andrew M. Cuomo would consider only proposals that did not take funding away “from other critical” needs, a spokesman for the state’s budget agency said n a statement.

The proposals call to mind — and in some cases are directly inspired by — the jobs programs that defined the New Deal response to the Great Depression. The Works Projects Administration, for example, employed roughly 8.5 million Americans over eight years, according to one 1946 estimate.

Another program that employed young men in wilderness jobs, called the Civilian Conservation Corps, has inspired many of the local officials creating jobs programs to respond to the pandemic. In Green Bay, the program shares a name: the Green Bay Conservation Corps.

There are more modern parallels to the current proposals. In the recession following the Sept. 11 attacks, Hawaii authorized a program that paid unemployed workers to help eliminate an invasive species called the miconia; some program participants went on to full-time jobs in conservation.

“They loved it,” said Senator Brian Schatz, Democrat of Hawaii, who was then in the state legislature. He added that some workers had declined to participate, choosing instead to stay on unemployment benefits.

Legislation recently introduced by Mr. Schatz would fund jobs programs throughout the country, including in conservation and public health. Other members of Congress have proposed creating a federal contact tracing corps or an expansion of environmental programs, as well.

“If there’s one thing that liberals and conservatives ought to be able to agree on, it’s that the best social program is a good job,” Mr. Schatz said. “This is a proven model.”

Economists on the left have called for a more significant intervention by guaranteeing every American a job, and they are so far unimpressed by piecemeal proposals.

“We need to be thinking bigger, bolder,” said Pavlina Tcherneva, a professor at Bard College and a supporter of a jobs guarantee. “Twenty people planting trees in one town is not going to cut it.”

But the idea of broad federal funding for a jobs program has yet to gain traction at the federal level. Instead, lawmakers have focused on efforts to incentivize businesses to retain employees or bonuses that would be given to employees going back to work.

Mr. Genrich acknowledged that his program, which can employ 20 people full time, was “obviously very modest” compared with “the scale of the crisis we’re facing.”

“But we think this is an important response to take to enable a few folks to be productively employed, to participate in something larger than themselves, connect with other people, and improve the City of Green Bay,” he said.