Why Japan’s Jobless Rate Is Just 2.6% While the U.S.’s Has Soared 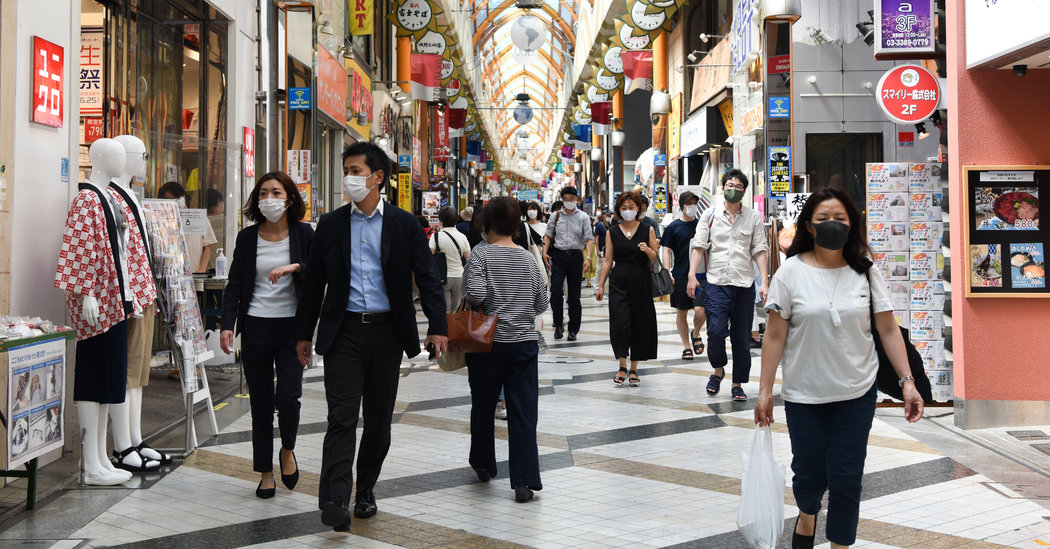 TOKYO — When the coronavirus hit Japan, Mari Nagata, a single mother who works in a restaurant, had a lot of worries. Her children’s school closed, and she feared what would happen to them if she got sick.

But there was one thing that Ms. Nagata, unlike millions of service industry workers in the United States, did not fret about: her job security.

“I was able to relax and take time off” to focus on child care, said Ms. Nagata, 38, an assistant manager at a takeout restaurant in Tokyo.

The pandemic has devastated economies around the globe, shutting businesses and slowing spending. However, the fallout has been much more severe in some countries than others, and nowhere is that more apparent than in unemployment figures in the United States and Japan.

The U.S. jobless rate skyrocketed in the past three months, peaking at nearly 15 percent in April and standing at 13.3 percent in May. That is the highest level since the Great Depression and a nearly fourfold increase since February, when the rate was 3.5 percent.

In Japan, though, the number has barely budged. The unemployment rate has ticked up just two-tenths of a percentage point since February, to 2.6 percent. Wages and working hours have also remained relatively stable.

That does not mean Japan’s economy — the world’s third largest after the United States and China — has been unscathed. Output shrank by 2.2 percent in the first three months of the year, pushing the country into recession. And data from April suggests that the picture is growing only bleaker.

But a constellation of social, demographic and epidemiological factors in Japan has meant that the economic slowdown has not produced mass layoffs.

Before the pandemic, Japan’s shrinking and graying population had created one of the planet’s tightest labor markets. Even now, some companies are having difficulty finding workers, with more than 120 job openings for every 100 job seekers nationwide in April.

And Japan, unlike the United States or China, has avoided a devastating spike in coronavirus cases, allowing it to keep more of its economy open. It asked businesses to close on a voluntary basis during a state of emergency that lasted a month and a half and ended in May.

But those differences account for only part of the gap. The rest comes down to a fundamental divergence in attitudes and policies toward labor.

In the United States, “when the economy gets bad, people get laid off one after the other, and the unemployment rate shoots up,” said Tomohisa Ishikawa, director of the Macro Economic Research Center at the Japan Research Institute. But for Japanese employers, “laying people off is difficult both psychologically and practically.”

Companies in Japan are more likely than their American counterparts to prioritize employees’ interests over those of shareholders, focusing on the sustainability of their business rather than maximizing growth, said Naohiko Baba, chief Japan economist at Goldman Sachs.

There are also strong social expectations that Japanese companies will retain workers. Japan’s businesses are often tough on their employees, asking them to put in some of the longest hours in the world, but companies are expected to provide job security in return — in many cases, for life.

Violating that social contract can have severe reputational costs. In March, social media in Japan exploded with outrage after reports that employers had rescinded contract offers to 21 new graduates because of the pandemic.

Pro-labor attitudes have been reinforced by strong legal precedents built up since the end of World War II that prevent companies from laying off employees unless they can demonstrate they have no other choice.

During the coronavirus pandemic, the mix of protections has been a boon to many workers.

In March, Ms. Nagata’s employer, Soup Stock Tokyo, committed to keeping all of its workers in jobs and fully paid.

The following month, when the Japanese government asked individuals to stay home and businesses to shorten their hours, the company put Ms. Nagata and her nearly 1,600 co-workers on furlough. They joined the nearly 4.2 million Japanese workers who have been furloughed during the crisis.

Japanese law requires businesses to pay furloughed employees 60 percent of their wages. Soup Stock Tokyo made up the difference for Ms. Nagata and her co-workers by taking advantage of government subsidies and no-interest loans, part of a stimulus package aimed at softening the coronavirus’s economic damage.

For a little over a month, Ms. Nagata largely stayed home, participating in daily half-hour virtual meetings aimed at preparing for a return to business. She used the time to care for her two children, who were home from school.

The company used the time to shift its business toward a delivery model and develop new products, like packaged soups and curries, aimed at a post-coronavirus world in which customers may eat out less.

In mid-May, just before the government lifted the state of emergency, Ms. Nagata returned to work.

Not everyone has been as fortunate. For Sayoko Hirano, 29, a ballet dancer in Tokyo, a furlough has meant that she has taken a large pay cut on an already modest salary. But she is quick to acknowledge that her situation could be worse.

“I’m getting paid for not working, so I have absolutely no complaints,” she said. “I think a lot of people have that same awareness, so no one’s saying ‘give me 100 percent compensation.’”

While Japan’s aversion to layoffs is a godsend for workers in hard times, it also comes with a price.

Critics say it makes companies reluctant to take risks in hiring new employees, reducing options for the country’s young workers. It may also make it more difficult for businesses to retool their work forces to adapt to changing conditions, making them less productive and hurting their ability to compete in the global economy.

In recent decades, companies have tried to gain some flexibility by increasing the ranks of “non-regular workers” — employees on short-term contracts who work for lower wages and have less job security.

In times of crisis, such workers have been let go in large numbers. During the 2008 financial crash, these workers, who currently account for about 40 percent of the work force, were the first to lose their jobs. The pattern has held during the coronavirus pandemic, with 970,000 non-regular workers losing their jobs in April, according to government data.

Female workers have borne the brunt of the job losses. Since Prime Minister Shinzo Abe took office in 2012 and introduced an effort, known as “womenomics,” to elevate women in the labor force, Japan has achieved one of the highest female work force participation rates in the world. But more than half are irregular workers.

“Females are always sacrificed in these situations,” said Ayako Fujita, an economic analyst at J.P. Morgan. She said she worried that the current downturn could set back recent progress made by women in the workplace.

In the months ahead, the unemployment rate is likely to rise further as Japanese companies, particularly in the service industry, cope with the pandemic’s fallout. The real test of the system will come in September, when the government wage subsidies — which are set to last far longer than similar assistance in the United States — run out.

Still, economists say that the country’s tight labor conditions will keep unemployment rates low — Japan has a longstanding labor deficit in some industries, like health care, where demand is expected to grow as the population ages. Even in April, in the middle of the national emergency, companies added 630,000 new regular employees.

Japan’s protection of jobs in a moment of crisis may answer critics who have pushed its companies to pursue growth more aggressively, said Mr. Baba, the Goldman Sachs economist.

“I think maybe in the next couple of years, an increasing number of people will say something like although we criticized Japan for an inflexible labor market, there are some benefits to this system,” he said.