Why the U.S. May Remove Hong Kong’s ‘Special Status’ 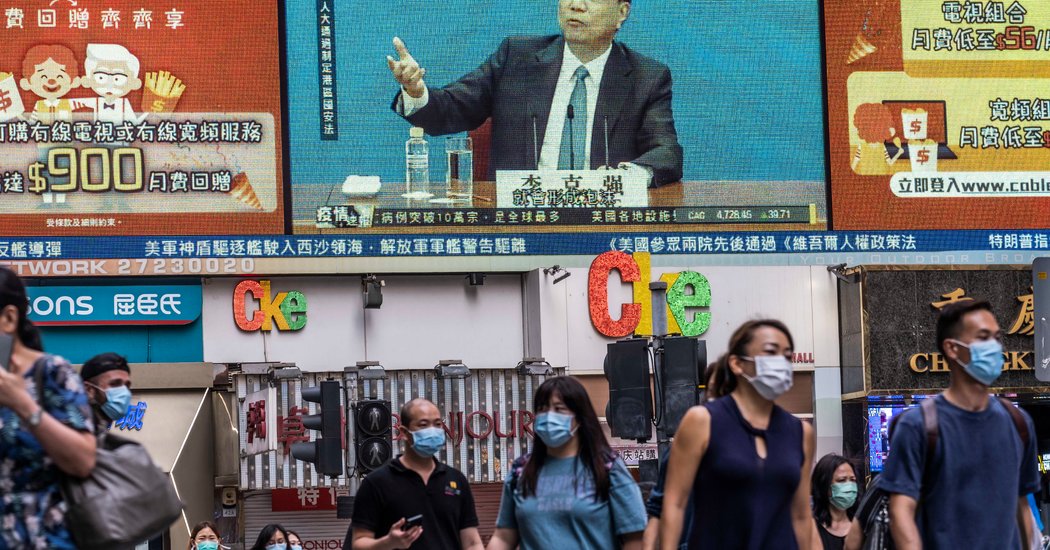 Hong Kong risks becoming collateral damage in the growing rivalry between China and the United States.

Chinese leaders have moved to extend Beijing’s grip over the former British colony. In response, officials in Washington are considering whether to strip away the special status they have long afforded the semiautonomous territory, which has helped it build its status as a global financial hub and as a critical gateway between China and the United States.

Should the United States revoke that designation, Hong Kong’s status as a business capital will be in jeopardy.

Why does Hong Kong get special status?

The United States has long had a special relationship with Hong Kong, despite the fact that the former British colony is part of China.

Britain, which initially claimed the territory during the Opium Wars, handed it back to China in 1997. Beijing in turn pledged that Hong Kong would keep a high degree of autonomy under a “one country, two systems” understanding. Even though it is part of China, Hong Kong operates under its own laws that include economic and civil freedoms that cannot be found in mainland China.

The special status that Washington grants Hong Kong acknowledged this difference. Under the United States-Hong Kong Policy Act of 1992, Hong Kong is treated differently by U.S. law when it comes to financial transactions, immigration and trade.

That status has allowed annual trade between the two to grow to some $38 billion.

Why is that status in jeopardy?

China’s Communist Party has been frustrated by the anti-Beijing protests that erupted in Hong Kong beginning last year. On Thursday, Chinese leaders approved a plan that would include drafting a new law expected by September to suppress terrorism, support national security and quell calls for Hong Kong independence from China.

It is not yet clear what the new law would include. But diplomats and business leaders worry that the legislation will politicize immigration, infringe on Hong Kong’s free speech and the free flow of information online, and lead to meddling with financial market regulations.

China last week signaled it would approve the plan, and American officials have expressed their dismay. Secretary of State Mike Pompeo on Wednesday declared that he no longer considered Hong Kong to have a high degree of autonomy from the mainland, paving the way for punitive measures that could bring Washington’s special economic relations with the territory to an end.

What happens if the status changes?

Under the special status, the U.S. dollar can be freely exchanged with the Hong Kong dollar, which makes the city a particularly attractive place for American companies to do business. Hong Kong gets preferential treatment on trade, meaning little to no tariffs or other costs. The United States and Hong Kong enjoy visa-free travel, making it easy for business executives to come and go.

If the United States removes Hong Kong’s special status, all that could come to an end.

Depending on Washington’s response, the removal of the special status could lead the United States to treat Hong Kong the same way it treats any other Chinese city. That would mean higher tariffs, including those enacted amid the trade war between the United States and China. Movement between the two places would be restricted as well. Many American businesses may choose to leave.

Removal of the special status could lead to greater scrutiny of investments in the United States by Hong Kong companies, too. In recent years, Washington has made increasingly hard for Chinese companies to invest there.

Hong Kong is considered a special administrative region of China, or S.A.R., but “the S in S.A.R. is only special in that the rest of the world treats it differently from the mainland,” said David Webb, a former banker and investor in Hong Kong.

Can Trump change the status himself?

President Trump can change the status by himself, through an executive order.

Congress, however, has increasingly pressed him to act. Last year, Mr. Trump signed the Hong Kong Human Rights and Democracy Act after it was approved in both the Senate and the House by wide margins. The act requires government agencies to review Hong Kong’s autonomy from mainland China each year.

Removing the status carries political risks. It would make Mr. Trump look tough on China ahead of November’s election, an approach he has taken to divert attention away from the U.S. government’s stumbles in addressing the coronavirus outbreak. But it could also jeopardize his trade war truce with China, one of the major accomplishments of his administration.

Does the U.S. risk hurting itself?

On paper, the United States exports much more to Hong Kong than it imports. Making business tougher in Hong Kong could also drive the territory’s population, which has broadly expressed sympathy with the pro-democracy demonstrators, closer to Beijing.

“The harder the U.S. hits us in terms of cutting our ties, what will happen is that will drive us towards mainland China, won’t it?” said Regina Ip, the leader of the pro-Beijing New People’s Party in Hong Kong.

But Washington may calculate that the damage will be painful enough to China to make its objections clear. Chinese companies, including state-owned enterprises, use Hong Kong as a place to raise money. It is home to complicated but essential financial plumbing used by Chinese companies and individuals, who are limited in how much money they can move in and out of China because of Beijing’s tight limits over financial flows past its borders. Ending its special status could severely weaken those benefits.

Hong Kong is also the regional headquarters for many of the world’s biggest companies. China’s vast economy remains a big draw. But if Hong Kong loses its transparency and openness, those companies may decide to set up shop elsewhere.