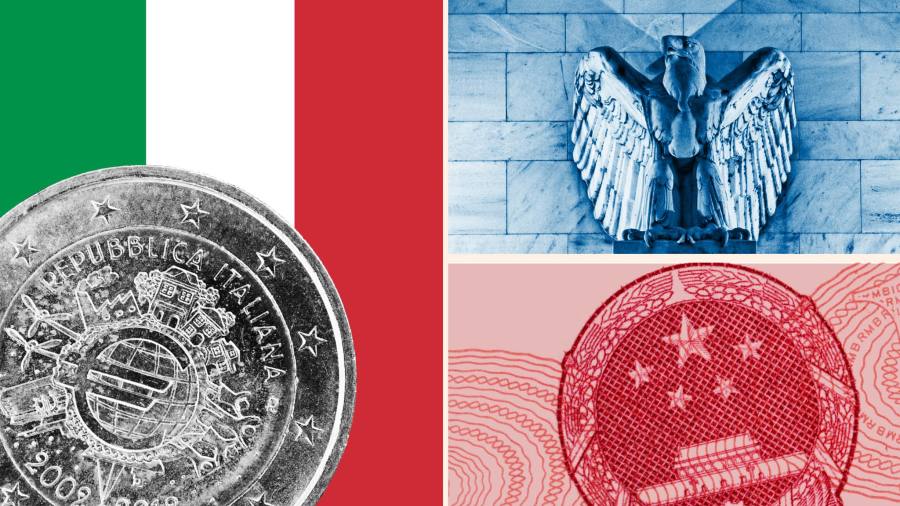 Investors have become increasingly nervous about the damage inflicted on the debt-laden economy of Italy during the coronavirus pandemic. The additional yield demanded by investors to hold the country’s 10-year bonds over German Bunds has risen from 1.6 percentage points in late March to about 2.4 percentage points. The fear is that this vital measure of its prospects will weaken further.

The poor sentiment follows signs that Italy’s economy has been operating at much lower capacity than Germany’s during lockdown. Italy’s economy shrank 4.7 per cent in the first quarter, compared with Germany’s 2.2 per cent contraction. Some fear Italy’s credit rating could be heading for junk status, which would force many investors to dump their bond holdings.

However, the European Central Bank has ramped up its bond-buying programme and is widely viewed as being prepared to buy Italian bonds even if the country were to be downgraded. And despite a perceived lack of financial support from richer, northern European countries, an “Italexit” from the eurozone is seen as unlikely.

“I’d be more concerned if there was a credible path for Italy or other countries outside of the eurozone,” said Jonathan Gregory, head of fixed income UK at UBS Asset Management, whose funds own Italian government bonds. “The recent widening [in the spread over Germany] is probably overdone.”

Unlike 2018, when hedge funds such as Brevan Howard and Discovery Capital Management made big gains betting against Italian debt, there has been little interest from short sellers so far. Bond borrowing — a good indicator of short-selling interest — jumped from $12bn at the start of March to $17.4bn by March 23, but has since fallen back below $9.5bn, according to data group IHS Markit. For now, at least, it seems few funds are ready to wager on higher borrowing costs. Laurence Fletcher

What more will the Fed do to address the economic crisis?

After Federal Reserve chairman Jay Powell last week painted a grim picture of the economic outlook, investors are eager to find out what further measures the central bank is considering as the coronavirus crisis unfolds. They will get that opportunity on Wednesday with the release of minutes from the Fed’s most recent monetary policy meeting.

Ahead of the meeting last month, investors were keen for Mr Powell to provide more guidance on the future path of interest rates, and perhaps even introduce new metrics regarding the unemployment rate or inflation to steer long-term monetary policy.

Investors also sought additional clarity from the Fed about its asset-purchasing programme and how it would adjust it, now that trading conditions have improved in the markets for US Treasuries and agency mortgage-backed securities.

Mr Powell did not offer clear answers to these two questions at his press conference at the end of April, but Wednesday’s minutes could provide detail on where the debate is headed.

What is clear is that the Fed is not considering a policy of negative interest rates, despite recent market pricing indicating they are an increasing possibility. Mr Powell reiterated this point last week in his remarks to the Peterson Institute for International Economics in Washington, as did a handful of his colleagues.

The message from Fed officials on negative rates has been “fairly clear”, said Chris Iggo, chief investment officer for core investments at AXA Investment Managers. “This is a last resort and not one they are going to choose any time soon.” Colby Smith

What policy measures will China set at its annual party meeting?

The coronavirus pandemic and renewed trade tensions with the US have sharpened investors’ focus on China’s economic policy options. This week, investors will get their clearest insight yet into policymakers’ intentions as the nation’s elite convenes on Friday in Beijing for the long-delayed National People’s Congress.

The annual conclave of the ruling Chinese Communist party had been scheduled for early March but was postponed as Covid-19 tore across the country. As recently as two weeks ago, it still did not have a firm start date.

President Xi Jinping’s politburo has already announced priorities including protecting employment and supply chains. Analysts expect at least some type of large-scale support programme after the People’s Bank of China did not repeat its time-honoured vow to refrain from “flood-like” stimulus to support growth in its monetary policy statement last week.

Further impetus for such stimulus has come from this month’s threat by US president Donald Trump to impose new tariffs on Chinese goods. Last week tensions escalated further, with Mr Trump warning that he could “cut off the whole relationship” with China. Analysts expect the central bank would allow the renminbi to weaken in response, cushioning the blow to exporters. Hudson Lockett