With Baseball Up in the Air, What About the Ballpark Peanuts? 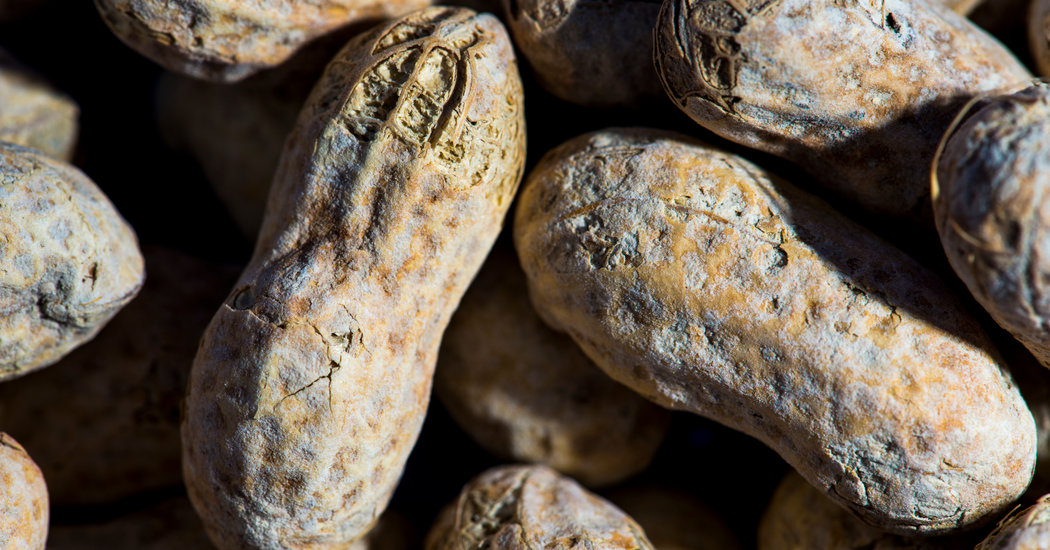 Classic stadium food like garlic fries, Dippin’ Dots and pump-cheese nachos are touchstones of something that feels heartbreakingly far away this summer: the thrill of being part of a huge crowd sharing a singular experience.

Within the pantheon of concessions sidelined by the pandemic, ballpark peanuts stand out. Roasted in their shells and tossed into the stands with great ritual and panache, peanuts have been part of the national pastime for nearly 125 years.

They have more cultural heft than hot dogs, and a more onerous coronavirus saga, too.

Today, most of the 2.3 million pounds of in-shell peanuts consumed during a typical baseball season are languishing in cold storage, waiting — like the fans — for an opening day at the park that is unlikely to come. Baseball teams both minor and major are trying to find a way to schedule a season, but there will be no one in the stands to shell out $4 or $5 for a bag of peanuts.

The pandemic shut down the season before it even started. Teams postponed or canceled orders. Farmers, who had harvested peanuts for the 2020 baseball season in October, had already shipped them to the roasters and been paid.

“We are basically left holding the peanuts,” said Tom Nolan, the vice president of sales and marketing for Hampton Farms, the North Carolina-based peanut and peanut butter company that roasts and packages most of the peanuts sold at baseball stadiums.

The race is on to figure out what to do with all those special peanuts, which are expensive to grow and delicate to harvest.

Only a certain peanut bred for the proper size and the look of its shell makes the cut for the ballpark trade. It’s called the Virginia, grown in that state but also in the Carolinas, Texas and, to a lesser degree, New Mexico. (Only 14 percent of all the nation’s peanut crop are Virginias. Most are runner peanuts, which are ground into peanut butter.)

Of those big Virginias, about one-fifth end up at the ballpark. The rest are sold at grocery stores, gas stations and, at least before the pandemic, restaurants like the Five Guys hamburger chain, which handed them out free.

Peanuts began flirting with baseball in the 1890s, after Harry Stevens, an immigrant from Britain, moved to Ohio and fell in love with the game. He designed and sold its first scorecards. His slogan: “You can’t tell the players without a scorecard.”

A peanut company named Cavagnaros traded bags of peanuts for advertising space on the cards. Mr. Stevens then sold the peanuts to stadiums.

A century later, in the 1990s, the little concession business he started with peanuts, hot dogs and scorecards was purchased by Aramark, which now supplies food to nine major-league ballparks, including about a million bags of peanuts each season.

By the time Jack Norworth wrote the lyrics to “Take Me Out to the Ball Game” as he rode the subway past the Polo Grounds in New York in 1908, the marriage between peanuts and baseball was sealed.

Peanuts are a little more popular in the minor leagues, where about 8 percent of the 40 million spectators each season buy a bag. In the majors, it’s closer to 6 percent, Mr. Nolan said. The difference is probably because it costs less to go to a minor league game and fans have more money for snacks, he said.

Fans might not think too much about how they look or the quality of their oil, but Dan Ward does. A farmer in Clarkton, N.C., he grows jumbo Virginias in the southeast corner of the state.

They’re not the easiest peanut to grow. The delicate shells crack more easily than the runners destined for peanut butter, so pulling them from the ground takes more time and patience. Growing them takes a special touch, too.

“You have to plant them in a loamy soil with enough sand, so the hull is bright,” he said. “I like for them to shine in the bag.”

About 400 of the 1,650 acres he plants every year are given over to ballpark peanuts. Last year’s crop — the one sitting in storage at Hampton Farms right now — was a particularly good one.

“Those peanuts should taste awesome,” he said. “When do get a crop like that, you want people to enjoy them.”

He had already sold that crop when the country began shutting down in March. But he didn’t escape the effects of the shutdown. By late April, with the coronavirus turning agriculture on its head, he had to calculate how many ballpark peanuts to plant in May for the 2021 baseball season.

He also grows corn and soybeans, so his peanut strategy depended in part on the volatile trade war with China and how much that country might buy. He had to figure in the price of other crops grown in his region and how the coronavirus would hit neighboring hog and poultry farmers, who buy some of his corn for feed. “It is a wild picture,” he said.

Peanuts still seemed like a good bet. Though not hugely profitable, they have always been a reliable slice of his business because of his long-term contracts with companies like Hampton Farms and Sachs Peanuts, the other major Virginia peanut processor, whose headquarters is not far from his farm.

“I planted a little bit more this year because I’m trying to be a little aggressive,” he said.

Meanwhile, the companies that bought those in-shell peanuts for what had been a robust baseball and restaurant market are trying to figure out what to do with them all.

“That’s going to be a problem,” said Bob Parker, the chief executive officer of the National Peanut Board. “You can put them in cold storage for a while and hope things will resume, but it doesn’t look so promising.”

The peanut board is scrambling, plotting a round of promotions featuring free bags of in-shell peanuts that will remind armchair baseball fans that they don’t need to wait to return to the stadium to crack some shells. Some grocery stores are planning promotions to move more bags of team-branded peanuts.

There are other rays of hope. During the first months of the pandemic, raw in-shell peanuts started selling out at Walmart and other retailers. Mr. Nolan thinks some of the demand might have come from people who wanted to try roasting their own at home, and from others who have been creating backyard “squirrel restaurants” — tiny picnic tables and bowls of raw shelled peanuts for squirrels.

An even bigger boost came from homebound snackers. Retail sales for shelled Virginias were up nearly 15 percent in May over a year earlier, largely because people bought cans of them in March for what Mr. Parker called “the initial pantry filling.” (“We don’t like to say ‘hoarding,’ ” he said.)

Sales have remained steady, which he said implies that once people realized that the pandemic wasn’t going to bring widespread food shortages, they started eating those peanuts. They liked them enough to go back to the store and re-up.

It didn’t hurt that children were not in school, where eating peanuts and peanut butter is limited to avoid triggering peanut allergies. “The kids could snack on peanuts all day,” he said.

For those who make a living growing and processing peanuts, the real hero of the pandemic is peanut butter. Sales in March jumped by 75 percent over those from the same month a year earlier. They slowed in April, but were still up.

Peanut butter was an easy solution for a nation that found itself suddenly eating every meal at home. It’s also cheap protein at a time when the nation is facing deep unemployment and increased poverty. The Federal Emergency Management Agency and organizations like Feeding America buy a lot of it.

“We can’t make enough peanut butter for FEMA and the food banks,” Mr. Nolan said. “That’s a very sad and sobering comment about our economy.”

In a way, it makes his work more meaningful. “Everyone here feels patriotic in a way about work right now,” he said. “We’re part of what keeps things going.”

Peanut butter sales are helping the industry overall, but it doesn’t make sense to dump Virginias into the grinder. Because they cost more to produce, they need to sell at a premium, canned or in the shell, for the economics to work.

Mr. Nolan is hopeful that what he calls “the rising tide of all peanuts” will carry his company until it figures out what to do with all those peanuts once destined for the ballparks. Or maybe baseball itself will come back.

No one wants to think the unthinkable: that the handsome roasted baseball peanut, the one with a bright shell that cracks easily under gentle pressure from a fan’s thumb, might have to end up in a peanut-butter jar.

“I would liken that to using a really fine beef tenderloin to make ground beef,” Mr. Parker said. “You can do it, and it would make great peanut butter, but it would be a great economic loss.”