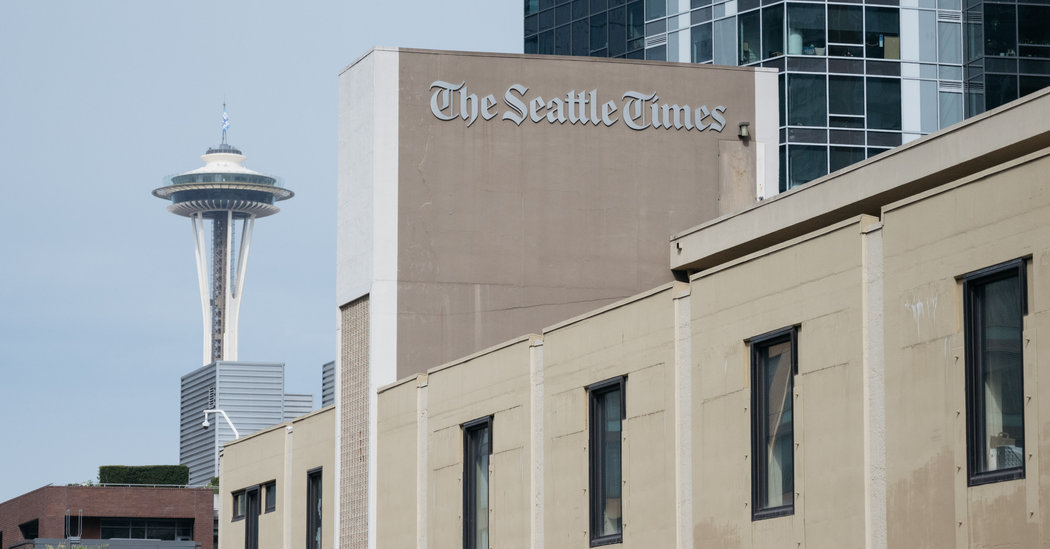 Is it a conflict of interest for news outlets to accept federal money under the Paycheck Protection Program? Will taking government funds cause them to go soft in their coverage of those in power?

The front page of a recent issue of Seven Days, a free weekly in Burlington, Vt., suggests the answer is no.

On April 3, the paper applied for a loan through the Paycheck Protection Program, which is meant to help small businesses through the coronavirus pandemic. Five days later, its front page showed a caricature of President Trump tossing toilet paper rolls labeled “CA$H” to people in need.

“We were joking about that,” said Paula Routly, the publisher and co-editor, referring to the dissonance between the paper’s loan application and its depiction of the man whose signature made the program possible.

Like hundreds of news outlets across the country, Seven Days was hit hard by the virus. The shuttering of shops and restaurants cut deeply into the publication’s advertising revenue. To keep it afloat, Ms. Routly laid off seven employees from the roughly 50-person staff.

Now five of those employees have gone back to work. The Community Bank of DeWitt, N.Y., informed Seven Days that its request for a loan had gone through, and the paper received about $450,000.

Ms. Routly said she had no problem with accepting federal aid. “It’s perfect for newspapers,” she said. “Restaurateurs got it but can’t put people back to work. We’ve been open the whole time.”

Many other news outlets have taken advantage of the program, including dailies like Newsday in Melville, N.Y., and The Times-Picayune/The New Orleans Advocate in Louisiana. Other recipients include Harper’s Magazine and the online publisher Bustle Digital Group. The Philadelphia Inquirer, which is run by a nonprofit, applied but has yet to receive funds.

Newspapers owned by chains like Gannett, Tribune Publishing and McClatchy are not eligible for the loans. The Paycheck Protection Program, part of a stimulus bill passed by Congress last month, is intended to help small businesses, defined in most industries as ones with 500 or fewer employees.

Under the program, loans to small businesses can be for as much as $10 million. Money that is used on “payroll costs, mortgage interest, rent and utilities payments” for eight weeks does not need to be paid back if the employer meets certain conditions. The rest is due in two years at a fixed rate of 1 percent, according to the Treasury Department.

Although a function of the press is to serve as a check against the government, none of the news publishers or editors interviewed for this article said accepting federal funds would compromise their coverage.

Rich Lowry, the editor of the conservative National Review, said the magazine did not apply to the program because of its longstanding commitment to free-market ideology and a general distaste for federal handouts.

“If National Review has to subsist on government assistance, all is lost,” he said.

Ann Marie Lipinski, curator of the Nieman Foundation for Journalism at Harvard University, defended news outlets that took the loans.

“Journalism is in triage mode right now,” she said. “These are emergency funds that in some cases are going to help keep jobs open.”

Of all the news outlets known to have applied for loans under the program, the Washington site Axios, which provides tick-tock coverage of the government’s inner workings, was perhaps in the diciest position. Last week, it disclosed that it had received a bailout loan for “just shy of $5 million.” Then, on Tuesday, Axios announced that it was returning the money.

In an Axios post, Jim VandeHei, a co-founder and the chief executive, did not cite concerns over future coverage as a reason for the change of heart. Instead, he noted, “The program has become much more politically polarized since its inception.” He added that a new source of funding had emerged, allowing Axios to return the money.

Axios, with 190 employees, was started in 2017 with some $30 million from investors including WndrCo, a holding company led by Jeffrey Katzenberg, Ann Daly and Sujay Jaswa.

Two progressive magazines, The Nation and Mother Jones, have applied for loans, executives at those publications said. Monika Bauerlein, the chief executive of the nonprofit Mother Jones, noted that news organizations had long benefited from federal spending.

“There are government programs and expenditures and subsidies that news organizations take advantage of, like postal rates or nonprofit status, that are available to any organization that qualifies,” Ms. Bauerlein said. The Paycheck Protection Program was “equivalent to those programs,” she added.

Paul Tash, the chairman and chief executive of The Tampa Bay Times, said the $8.5 million loan it had received from the program would help make up for a 50 percent loss in advertising revenue.

“We applied and received these funds as part of a program available to all businesses, not singling out newspapers,” he said.

Alan Fisco, the president of The Seattle Times Company, defended the $10 million loan The Seattle Times received. “If you go back to the founding fathers,” he said, “they saw the freedom of the press and of speech as fundamental to democracy and went so far as to create postal subsidies with the Postal Act of 1792.”

The News Media Alliance, a trade group, and the National Association of Broadcasters have promoted a letter signed by more than 240 federal lawmakers urging the federal government to spend some of its advertising budget on local news outlets.

The News Media Alliance has also asked the federal government to relax the rules covering which companies qualify for the Paycheck Protection Program so that struggling newspapers in small and midsize cities run by large companies may be able to receive funds.

David Chavern, the News Media Alliance president, stopped short of backing federal money for news outlets outside the conditions brought on by the pandemic. “The idea of a permanent fund for journalism is not sustainable with independence from the government,” he said.

By contrast, the NewsGuild, a union that represents journalists across the country, has called for federal programs that help local journalism, including a publicly financed fund.

Jon Schleuss, the NewsGuild president, acknowledged that the government and the news media made strange bedfellows but argued that the dire state of the industry demanded unusual measures.

“If we don’t act,” he said, “we could lose it all, and we won’t have the ability to have the discussion.”