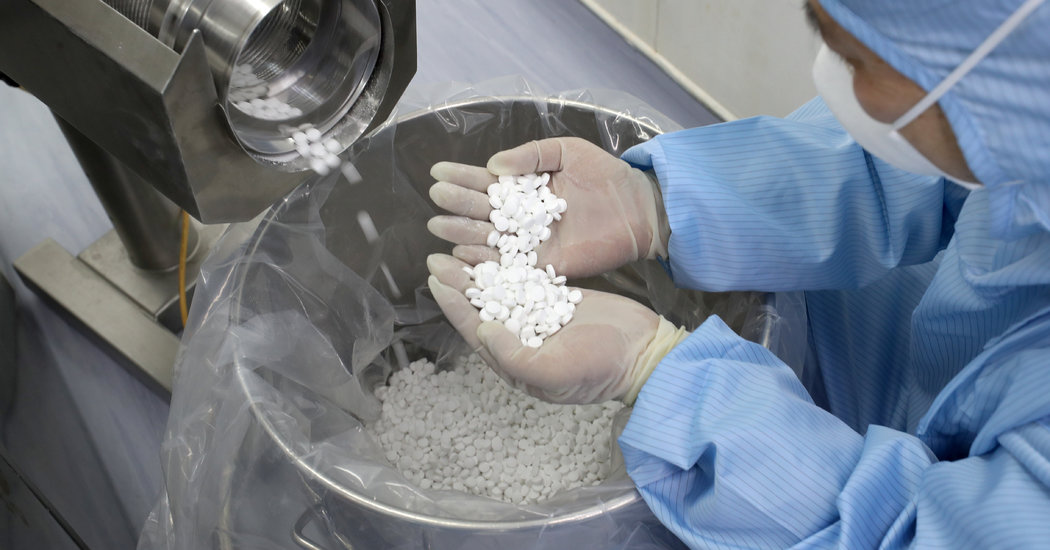 President Trump on Thursday exaggerated the potential of drugs available to treat the new coronavirus, including an experimental antiviral treatment and decades-old malaria remedies that hint of promise but so far show limited evidence of healing the sick.

No drug has been approved to treat the new coronavirus, and doctors around the world have been desperately administering an array of medicines in search of something to help patients, especially those who are severely ill.

The malaria drugs, chloroquine and hydroxychloroquine, are among the remedies that have been tried in several countries as the virus has spread around the world, killing at least 9,800.

Doctors in China, South Korea and France have reported that the treatments seem to help. But those efforts have not involved the kind of large, carefully controlled studies that would provide the global medical community the proof that these drugs work on a significant scale.

“I think it’s going to be very exciting,” he said. “I think it could be a game changer, and maybe not.”

The drugs’ potential has been highlighted during broadcasts on one of Mr. Trump’s favorite news channels, Fox News, where hosts like Laura Ingraham, Tucker Carlson and Jeanine Pirro have trumpeted the possibility of a real treatment.

“They’ve gone through the approval process,” Mr. Trump said of the drugs. “It’s been approved, and they did.”

But the F.D.A. has not approved any drugs for use in the treatment of coronavirus, and the drugs were already available, to treat malaria as well as rheumatoid arthritis. To date, the F.D.A. has not added the coronavirus to the list of illnesses for which the drugs are specifically approved. Then again, doctors have been free to use both old malaria drugs for any purpose deemed appropriate.

At the briefing on Thursday, Dr. Stephen M. Hahn, who has been the commissioner of the Food and Drug Administration for only three months, tended to walk back some of the president’s more inflated predictions that these drugs might vanquish the virus altogether.

He said Mr. Trump had asked the agency to look into chloroquine to fight the coronavirus, and that it was setting up a large clinical trial to evaluate the drug.

Some hospitals in the United States have already begun using the drugs for coronavirus patients, apparently reasoning that they may help and are unlikely to do harm. They are cheap and relatively safe. Laboratory studies have found that they prevent the coronavirus from invading cells, suggesting that the drugs could help prevent or limit the infection.

Not everyone can take the drugs: They are not safe for people who suffer from heart arrhythmia, or those with impaired kidneys or liver.

The University of Minnesota is conducting a study in which people who live with a coronavirus patient are being given hydroxychloroquine to find out if it can prevent the infection.

Dr. Hahn also said that the agency was allowing sick patients to use remdesivir, the not-yet-approved antiviral drug made by Gilead. Such so-called “compassionate use” programs allow patients to take unapproved, experimental drugs if they have no other options.

Remdesivir has already been given to patients on a compassionate-use basis, including the first coronavirus patient in the United States, who was treated in Washington State in late January.

Remdesivir is being studied in clinical trials, but the results are not available yet. It was studied to treat Ebola, but did not work well enough to be useful for that disease.

Dr. Hahn noted that the agency’s job was to prove that drugs were safe and effective. “What’s also important is not to provide false hope, but to provide hope,” he said.

As word has spread about chloroquine’s potential, demand in the United States has overwhelmed the country’s only supplier of the drug, the New Jersey generic manufacturer Rising Pharmaceuticals.

Chloroquine has been in short supply since March 9, according to the American Society of Health-System Pharmacists, which tracks drug shortages.

Ira Baeringer, chief operating officer of Rising Pharmaceuticals, said his company had been tracking the use of the drug in China and elsewhere. They increased production about three weeks ago, he said, and are meeting all of their orders. But he acknowledged that pharmacies may currently have low stocks.

“We are experiencing an extraordinary demand, as you can imagine, but we are shipping to all of the orders,” Mr. Baeringer said. He noted that the product had not yet been extensively tested for coronavirus so it was unclear how well it works. “We’re really trying to understand what the need is going to be.”

On Thursday, the German manufacturer Bayer said it had donated three million tablets of chloroquine to the U.S. government for potential use as a treatment for coronavirus.

Bayer does not sell its chloroquine product in the United States, but has said it is seeking approval from the F.D.A. for it to be used on an emergency basis. Chloroquine, sold under the brand name Resochin by Bayer, was discovered by the company in 1934. Bayer said in a statement Thursday that it “appears to have broad spectrum antiviral properties and effects on the body’s immune response.”

The company said it had been in recent talks with the White House and several federal agencies to offer assistance.

Mr. Trump has previously made unfounded predictions that the coronavirus epidemic would soon disappear. On Thursday, he appeared to enlist the malaria drugs in that effort, even though Dr. Deborah Birx, the White House’s coronavirus response coordinator, said the virus could return in the fall or winter of next year.

“If they work, your numbers are going to come down very rapidly,” Mr. Trump said. “So, we’ll see what happens, but there’s a real chance that they might — they might work.”