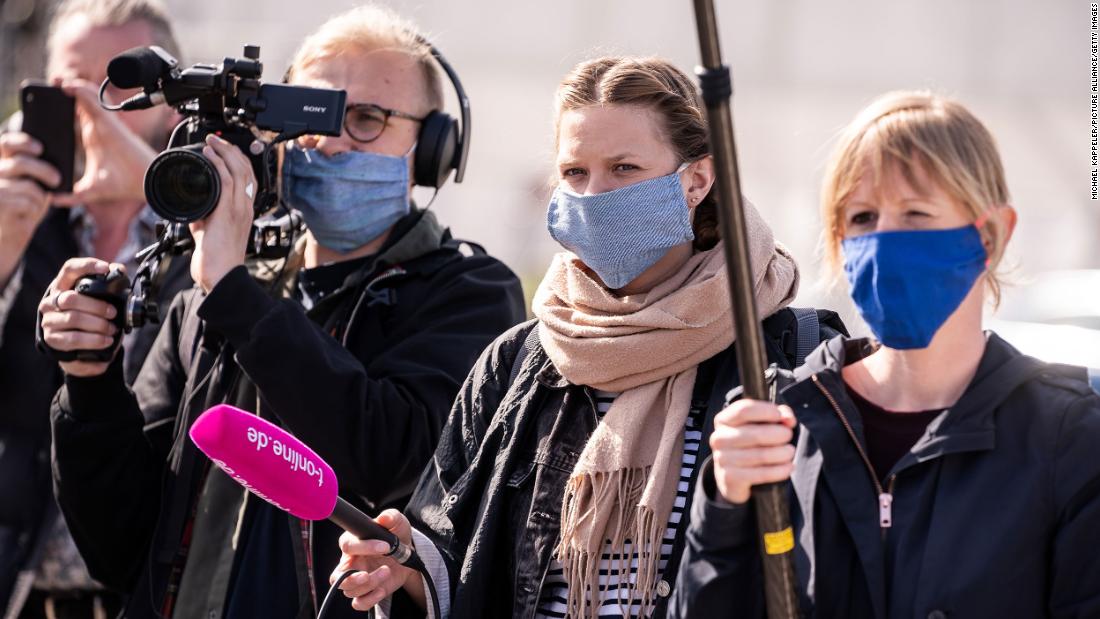 Journalists in numerous countries have been harassed, threatened and arrested while trying to cover the Covid-19 pandemic, according to the Committee to Protect Journalists and Amnesty International, which track such incidents.

“From the earliest days of this pandemic, when Chinese authorities censored media reports and punished whistleblowers, journalists around the world have been risking their lives, freedom and jobs to share potentially lifesaving information with the public,” Amnesty’s director of law and policy Ashfaq Khalfan said.
Another advocacy group, the International Press Institute, said it has registered “162 press freedom violations related to coronavirus coverage over the past two and a half months.”

Every year since 1993, May 3 has been World Press Freedom Day, as recognized by the United Nations, newsrooms, and nonprofit organizations all around the globe.

This year many of the planned in-person events were scrapped in favor of virtual panel discussions and meet-ups because of the pandemic.

Many of Sunday’s official statements were also reflective of the current crisis.

“As the pandemic spreads, it has also given rise to a second pandemic of misinformation, from harmful health advice to wild conspiracy theories,” UN Secretary-General António Guterres said. “The press provides the antidote: verified, scientific, fact-based news and analysis.”

A new UNESCO report, tied to World Press Freedom Day, sized up some of the pandemic’s effect on the press. Among them: “The economic impact of Covid-19 may pose an existential threat to journalism” and “some regulatory measures have led to new restrictions of human rights.”

Several heads of state also cited the pandemic in statements supporting the press on Sunday.

“On #WorldPressFreedomDay in the middle of COVID-19, journalists as frontline workers deserve our praise for putting their lives at risk to ensure valuable information is shared with the public,” Namibia’s president Hage Geingob wrote on Twitter.

“The pandemic, breaking with the rules of our everyday life, reaffirms in the most unequivocal manner the vital role of the free press in offering citizens accurate and valid information,” Greece’s president Katerina Sakellaropoulou wrote.
In the United States, Secretary of State Mike Pompeo issued a statement marking the day. That provoked scrutiny from journalists and other observers, given the Trump administration’s hostility toward much of the American media, plus Pompeo’s own history of antagonism.

“We commend the efforts of journalists working in repressive environments to support the free flow of accurate information, including on #COVID19,” Pompeo wrote. “We call for the immediate release of all journalists imprisoned for their reporting.”

President Trump marked the day with his usual assortment of angry tweets about “fake news.” On Sunday he wrote, “Lamestream Media is totally CORRUPT, the Enemy of the People!”

“It is particularly offensive to see the White House seek to spread misinformation and bully reporters in the midst of a global pandemic,” Biden’s statement said.

“As President,” Biden said, “I will restore a relationship with the independent press that is grounded in mutual respect, even — and especially when — they critique policies or positions of my administration. In a Biden White House, there will be no bullying of the media from the press room podium or by tweet.” He also pledged to have “regular, fact-based briefings.”

“Support for media freedom matters more than ever,” Biden added. “We must urgently reverse the trend of threats to the media at home and abroad, and once we have reversed it, we must assure that attacks on our free press are never again acceptable in any corner of society, and certainly not in the White House.”