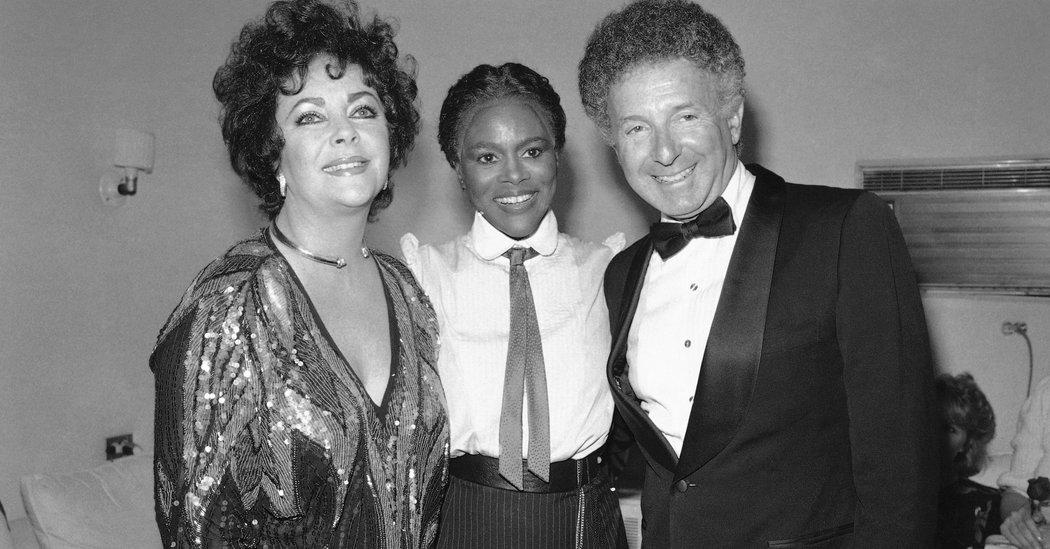 Zev Buffman had been a prominent Broadway producer for two decades when he met Elizabeth Taylor in 1980 at the opening night of his revival of “Brigadoon,” the Lerner and Loewe musical, at the National Theater in Washington.

Ms. Taylor, the epitome of screen glamour since the mid-1940s, had almost no stage experience. But Mr. Buffman, a brash Israeli-born impresario, asked her if she would act in a play. Smitten by talking to the actors at the backstage party that night and hoping to recover from a career lull, he recalled, she quickly agreed.

In May 1981, eight months after their encounter, Ms. Taylor opened at the Martin Beck Theater on Broadway in Mr. Buffman’s revival of “The Little Foxes,” Lillian Hellman’s drama about a wealthy Alabama family. It was a hit.

“From the moment I persuaded Elizabeth to do a Broadway show, I became her shepherd, her keeper, her doctor, her shrink, her best friend,” Mr. Buffman told The Tampa Bay Times in 2011.

Bringing Ms. Taylor to the stage was a signature moment in a career that started in the 1950s with bit parts in Hollywood films and blossomed when Mr. Buffman turned to producing shows on Broadway and elsewhere.

He died on March 31 at a hospital in Seattle, near Whidbey Island, where he had moved from Florida in 2018. His wife, Vilma (Greul) Buffman, said the cause was pancreatic cancer. He was 89.

Mr. Buffman’s fascination with show business began in Tel Aviv, where he was born Ze’ev Bufman on Oct. 11, 1930. His father, Mordechai, ran two movie theaters, and his mother, Clara (Torbin) Bufman, was a homemaker. Both had immigrated from Ukraine.

As a youngster, Ze’ev watched movies from the theaters’ projection booths, riveted by films like “Gunga Din” (1939), which he said he saw 78 times, and the fast-patter comedy of Danny Kaye. Already fluent in German, Russian, Hebrew, Arabic and Yiddish, he learned English from listening to Hollywood stars. (He later changed the spelling of his surname to Buffman to keep people from mispronouncing it “Boofman.”)

After serving as a commando in Israel’s Defense Forces during its War of Independence in 1948, he got a student visa and moved to Los Angeles in 1951, fixated on a Hollywood career. He enrolled at the two-year Los Angeles City College, where a talent scout from Paramount Pictures spotted him in a production of “Stalag 17.”

That led to a small role as an Arab guard in “Flight to Tangier” (1953), where, during a fight scene, Jack Palance accidentally dropped him on a concrete floor, knocking him out cold.

Early in the production of “The Ten Commandments” (1956), in which Mr. Buffman played two different Hebrew slaves, he saw a sign that had been written for a scene in modern and not ancient Hebrew lettering. He tried to fix the error from the set, his nephew Alan Fox said in an email, by shouting, “Hey, Ceece!” to the director, Cecil B. DeMille, who remonstrated him for not addressing him as Mr. DeMille. But he also asked Mr. Buffman to keep offering advice.

Frustrated at being cast only in minor roles, he turned to producing in the late 1950s. He bought the old Hollywood Canteen, which had provided entertainment to servicemen during World War II, and converted it to a dinner theater.

In 1960 he produced a musical revue, “Vintage ’60,” at the Ivar Theater in Hollywood, which became his first Broadway show when he and the producer David Merrick moved it to the Brooks Atkinson Theater that September. It closed after eight performances.

The experience did not deter him. He would produce or co-produce dozens of shows on Broadway until 2009, among them “Jimmy Shine” (1968), a comedy starring Dustin Hoffman, and revivals of “Peter Pan,” “Oklahoma!,” “West Side Story” and “A View From the Bridge.” His last Broadway credit was as one of many producers of a revival of Noël Coward’s “Blithe Spirit.”

In 1969 he presented a memorable flop, “Buck White,” a musical set at a meeting of a black militant group that closed after seven performances. The star was the former heavyweight champion Muhammad Ali, who had been stripped of his title for his refusal to enter the draft.

“I was amazed at his ability to carry a tune,” Mr. Buffman told The New York Times in 2019. But Ali was lackluster on opening night, following a bravura performance in the final preview.

“He said, ‘I fought my fight yesterday at the preview,’” Mr. Buffman said. “‘I came to fight again tonight but I was done.’”

Mr. Buffman’s relationship with another star, Ms. Taylor, continued after “The Little Foxes.” They collaborated on an ill-fated venture to produce three Broadway plays. The first, Coward’s “Private Lives” (1983), starring Ms. Taylor and her ex-husband, Richard Burton, was a critical and box-office flop, as was “The Corn Is Green,” also in 1983, with Cicely Tyson.

Recalling his time with Ms. Taylor, Mr. Buffman told The Tampa Bay Times: “In the beginning my relationship with her was wonderful. Later it got more difficult with the drugs and booze.”

“He had a great sense of what the general public, who would fill his seats, would like,” Arnold Mittelman, the former producing artistic director of the Coconut Grove Playhouse, said by phone. “He also had the vision to add a 300-seat mezzanine that extended over the 800-seat orchestra.”

Some of the shows that opened at the Florida theaters, like “The Little Foxes,” which had its premiere at the Parker Playhouse, moved to Broadway; others toured the country. Mr. Buffman was also a general partner and producer at the Chicago Theater in the late 1970s and early ’80s, and helped renovate the Saenger Theater in New Orleans.

“He didn’t know anything about basketball,” Vilma Buffman said, “but he used to say it’s like going to the theater. You go to a game, you go to theater.”

By 1992, though, feuding among the owners led Mr. Buffman to sell his interest in the team.

Theater remained his focus. For eight years starting in 2003, he was president of the RiverPark Center, a performing arts center in Owensboro, Ky. In 2011, at 81, he became president of Ruth Eckerd Hall. He retired two years ago.

In addition to his wife, Mr. Buffman is survived by his son, Gil Bufman; a stepdaughter, Denise Auld; and seven grandchildren. His marriage to Debby Habas ended in divorce.

Ms. Buffman said that her husband’s proudest achievement was producing a revival of “Oklahoma!,” because of its subject matter.

“He said it was like Israel,” she said. “They came to a new area, developed it and it became a state.”