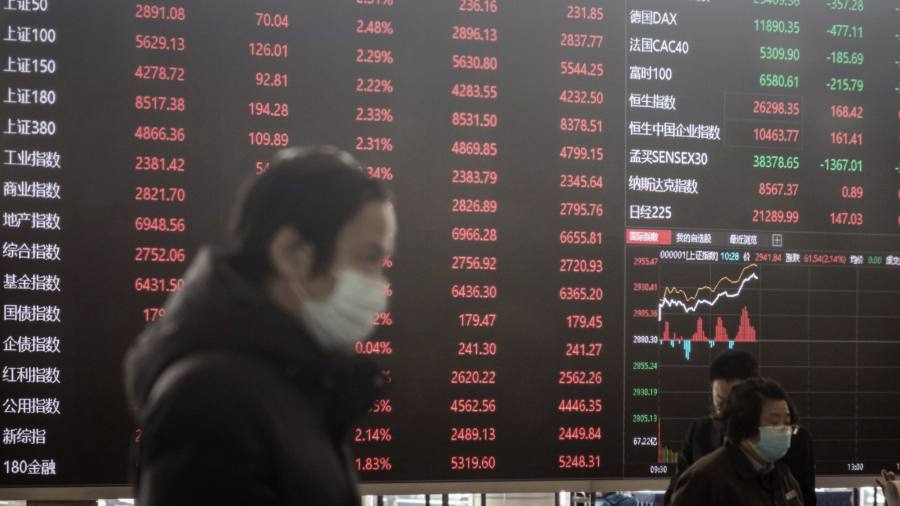 The 10-year US Treasury yield hit a record low and stocks fell after the Federal Reserve cut interest rates and warned of “evolving risks” from the spread of the coronavirus.

A rally in US government bonds pushed the yield on the 10-year Treasury note to 0.999 per cent, falling below 1 per cent for the first time ever. The yield on the policy-sensitive two-year note fell 0.2 percentage points to 0.69 per cent. Yields fall when prices rise.

US stocks fell more than 2 per cent after initially jumping as much as 1.5 per cent in the moments after the central bank’s unscheduled cut. Bank stocks were especially hard hit, with Bank of America down more than 5 per cent.

Stocks fell after Jay Powell, Fed chair, appeared reluctant to cut rates further. “We like our current policy stance . . . but we are prepared to use our tools appropriately,” he said at a press conference on Tuesday.

“The really puts pressure on their next meeting — a lot of people in the market want another [quarter-point] cut coming now,” said JJ Kinahan, chief market strategist for TD Ameritrade.

Markets had already recovered some of last week’s steep losses on the prospect of co-ordinated policy action from the world’s major economies.

Earlier on Tuesday, central banks in Australia and Malaysia cut their interest rates, the Bank of Japan injected liquidity into the country’s financial system for a second day, and the Bank of England’s governor said the bank stands ready to support the economy.

Following a conference call on Tuesday, the group of nations G7 policymakers issued a statement in which they pledged action to be taken individually by each country, without detailing specific measures.

“We reaffirm our commitment to use all appropriate policy tools to achieve strong, sustainable growth and safeguard against downside risks,” the statement said.

Despite the flurry of optimism, some investors have questioned the limits of monetary policy in responding to a global health crisis.

“If you want to fix your health by going to a bank, you’ve got a problem,” said Davide Serra, founder of London-based investment firm Algebris, which manages around $13bn in assets. “The last 10 years’ addiction to what central banks are going to do is, in my view, short-sighted.”

He said he had been buying protection against falling prices in stocks and high-yield bonds. “The pandemic risk is real, it is serious,” said Mr Serra. “Who is in charge here is the WHO [World Health Organisation], not the central banks.”

Financials were the worst hit sector in the US stock market, losing 3.2 per cent. The rate cut “is a credit negative for US banks, exacerbating downward pressure on net interest margins and profitability,” said Allen Tischler, senior vice-president in Moody’s Financial Institutions Group

The euphoria in the market is unlikely to last and we still expect two weeks of very elevated volatility as the reality sinks in.

Analysts have also warned that stimulus measures in China, where the outbreak began and which is home to most Covid-19 infections, could prove anticlimactic.

“It is premature to expect an imminent fiscal stimulus from China,” said Zhou Hao, an economist at Commerzbank. “The enthusiasm in the financial markets due to China’s stimulus hope is probably overdone.”

Mr Zhou said it was unlikely Beijing would launch any large-scale stimulus until it was clearer how much damage had been done to the economy by the coronavirus. The annual meeting of China’s legislature has been delayed due to the epidemic, further clouding the outlook for such measures.