Fired in a Pandemic ‘Because We Tried to Start a Union,’ Workers Say 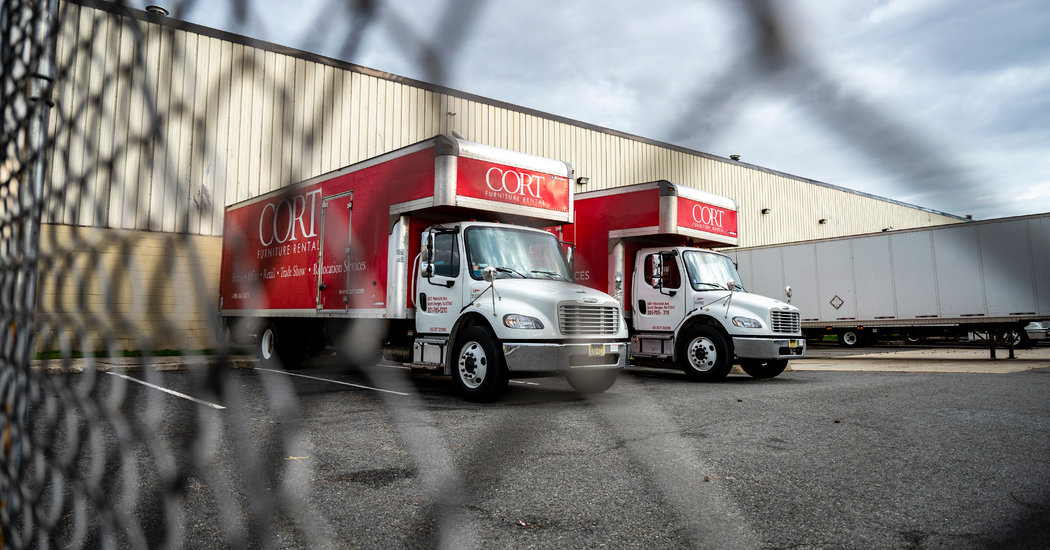 Truck drivers and warehouse workers at Cort Furniture Rental in New Jersey had spent months trying to unionize in the hopes of securing higher wages and better benefits. By early this year, they thought they were on the cusp of success.

But when the coronavirus arrived, Cort, which is owned by Warren Buffett’s Berkshire Hathaway, laid off its truck drivers and replaced them with contractors, workers said. The union-organizing plans were dashed.

“They fired us because we tried to start a union,” said Julio Perez, who worked in Cort’s warehouse in North Bergen, N.J.

As American companies lay off millions of workers, some appear to be taking advantage of the coronavirus crisis to target workers who are in or hope to join unions, according to interviews with more than two dozen workers, labor activists and employment lawyers.

Nurses in North Carolina accused Mission Hospital, which is owned by the for-profit hospital chain HCA Healthcare, of using the pandemic to delay a union election. At Uovo Fine Arts, a company that packages and transports art for wealthy individuals and galleries, workers said that they were laid off as punishment for trying to unionize last year. Everlane, the online clothing company, laid off much of its customer-service team four days after a small number of its members informed the company’s chief executive that they had enough support to form a union. The company that owns The Plain Dealer newspaper in Cleveland this month laid off journalists who were in a guild and increased its reliance on non-unionized workers.

Companies say the layoffs are legitimate responses to an extraordinary economic crisis that has left many businesses on the cusp of collapse, not punishment for unionizing. Unionized employees tend to be more expensive, and getting rid of them can be an especially potent cost-cutting move.

Some big companies have accused workers of trying to exploit the crisis to glean public sympathy and gain momentum for unionization. A spokeswoman at Mission Hospital, for example, said that National Nurses United, the union behind the drive, “is trying to use this crisis to advance its own interest — organizing more members.”

There already have been some well-publicized cases of employees at major companies agitating for change — and then feeling that they are being punished for it.

Workers at an Amazon warehouse in Staten Island, N.Y., recently accused the company of firing employees who complained about working shoulder to shoulder in the midst of the pandemic. In a letter sent last week, the New York attorney general, Letitia James, said the company may have violated federal worker safety laws and the state’s whistle-blower protections when it fired one worker.

In Louisville, a worker at Trader Joe’s supermarkets said he was fired after he created a Facebook page to discuss working conditions. On March 31, Trader Joe’s chief executive circulated a letter opposing labor unions and calling any attempts to recruit workers “a distraction.” A spokeswoman for Trader Joe’s denied that the worker had been fired because of his Facebook post. Amazon said that it respected its employees’ rights to protest, but that those rights “do not provide blanket immunity against bad actions.”

The pattern is playing out across the American business landscape.

“This is a continuation of behavior that has become all too common, of employers being willing to use increasingly aggressive tactics to stop unionizing,” said Sharon Block, a former National Labor Relations Board member appointed by former President Barack Obama. “The pandemic has given them another tool in their toolbox.”

Companies have seized on crises before to target union organizers, said Joseph A. McCartin, a labor historian at Georgetown University. During the 1918 influenza pandemic, just as organizers were making inroads at steel plants and big industrial companies like General Electric, local officials, at the behest of big companies, began banning meetings. Their stated rationale, Mr. McCartin said, was public health and the risk of workers infecting one another at large gatherings. G.E. managed to stall union-organizing drives, he said.

What makes this time even tougher for union organizing, Mr. McCartin said, is that it combines a pandemic with a period of mass layoffs. “I suspect that just like the pandemic itself, a lot more of this is happening than we even realize,” he said.

In some cases, the actions are subtle. Some companies have hired consultants to warn employees about the risks of unionizing. “They imply that with this coming recession, there are hundreds of workers who would be more than happy to come in and take your jobs if you unionize,” said John Logan, a labor expert at San Francisco State University.

Workers at Comanche Peak Nuclear Power Plant in Glen Rose, Texas, had been trying to organize a union. The plant is operated by a subsidiary of Vista Energy, but a firm called Day & Zimmermann provides the labor. At a meeting with a handful of workers last month, a consultant hired by Day & Zimmermann warned about the perils of organizing during periods of extremely high unemployment. He said that huge numbers of skilled workers had recently lost their jobs in the oil and gas industry and “would absolutely be willing to come to a place like ours and work,” according to a recording of the meeting reviewed by The New York Times.

In New Jersey, truck drivers and warehouse workers at Cort Furniture Rental, which supplies desks, chairs and other furniture to homes and businesses in New York and New Jersey, began meeting in January to discuss joining the local chapter of the Teamsters union. Most people were in favor of joining, organizers said, and nearly everyone signed a union authorization card supporting a vote.

But before a vote could take place, Cort hired outside truckers to deliver furniture for the company, drivers told The Times. By the end of March, Cort had laid off most employees at the North Bergen location.

“Now we don’t have insurance, we have nothing,” said Walter Infante, a driver who helped to lead the organizing efforts and who spoke to The Times through an interpreter.

A spokeswoman for Cort declined to comment other than to say that the company “does not comment about possible, pending or ongoing litigation.”

In Cleveland, Advance Ohio owns both The Plain Dealer newspaper and the cleveland.com website. The newspaper’s journalists are unionized; the website’s are not.

The company announced last month that it would lay off 18 of its unionized newsroom employees, saying it would rely on the website’s journalists to fill some of the void. The Plain Dealer’s guild accused Advance Ohio of “union busting.”

Fourteen journalists remained in The Plain Dealer’s newsroom, down, the guild said, from more than 300 just a decade ago. Since the layoffs, most of them were reassigned to cover far-flung counties, which the guild characterized as “part of a broader move to eliminate The Plain Dealer and its staff altogether.”

Tim Warsinskey, The Plain Dealer’s editor, said in a statement that the reassignments were meant to complement cleveland.com’s coverage, not to sabotage the union.

This month, 10 of the remaining Plain Dealer journalists were laid off. The newspaper’s print edition is now filled largely by cleveland.com content.

It’s hard — sometimes impossible — to prove that a company is dumping workers in order to undermine a union as opposed to simple cost-cutting.

David Martinez and Peter Mackay have no doubt. They had worked for years at Uovo Fine Art in Queens, N.Y., storing, packaging and transporting artwork among the company’s warehouses. When the coronavirus started spreading, the men knew business would slow down, but they figured they would be fine, in part because of their seniority at Uovo.

“This is obviously retaliation,” said Mr. Mackay, who had worked at Uovo as a driver and art handler for more than five years.

A Uovo spokeswoman said: “The claims subsequently asserted by two of the team members are entirely unfounded.”

Employees at Housing Works, a nonprofit counseling center in New York City, planned to vote by mail on March 20 on whether to form a union. Two days before the ballots were set to go out, the law firm representing Housing Works, Seyfarth Shaw, urged the National Labor Relations Board to delay the vote.

Less than two weeks later, Housing Works laid off 29 people and furloughed 167. “That was pretty cold,” said Adrian Downing-Espinal, 39, who worked as a substance abuse counselor there and had been leading the push to unionize. She was among those to lose their jobs.

“Never did we target — or ever would consider targeting — anyone based on union affiliation,” said Matthew Bernardo, Housing Works’ president. He said that at the time the ballots were set to go out, Housing Works was struggling to figure out what the coronavirus meant for its clients, services and stores.

“It just didn’t seem like the time to go out there and run an election that was fair,” Mr. Bernardo said.