G.D.P. Declined in First Quarter, With Worse Economy to Come 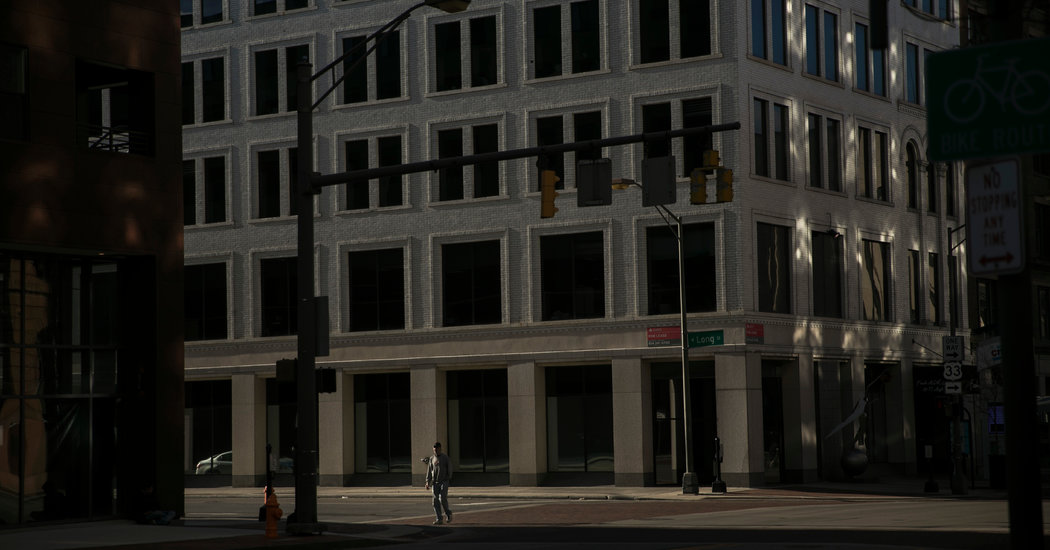 The coronavirus pandemic officially snapped the United States’ economic growth streak in the first three months of the year.

The question now is how deep the damage will get — and how long the country will take to recover.

U.S. gross domestic product, the broadest measure of goods and services produced in the economy, fell at a 4.8 percent annual rate in the first quarter of the year, the Commerce Department said Wednesday. That is the first decline since 2014, and the worst quarterly contraction since 2008, when the country was in a deep recession.

There is much worse to come. Widespread layoffs and business closings didn’t hit until late March in most of the country. Economists expect figures from the current quarter, which will capture the shutdown’s impact more fully, to show that G.D.P. contracted at an annual rate of 30 percent or more, a scale not seen since the Great Depression.

The larger question is what happens after that. Steven Mnuchin, the Treasury secretary, said this week that he expected the economy to “really bounce back” this summer as states lift stay-home orders and trillions of dollars in federal emergency spending reaches businesses and households.

Most independent economists are much less optimistic. The Congressional Budget Office last week released projections indicating that the economy will begin growing again in the second half of the year but that the G.D.P. won’t return to its pre-pandemic level until 2022 at the earliest.

The estimates issued on Wednesday are preliminary and based on incomplete data, particularly for March. The speed of the economic shift means that revisions could be particularly large, and some economists expect final figures, due later this spring, to show an even bigger decline.

But the data, however incomplete, hinted at the breadth of the damage. Consumer spending, the bedrock of the decade-long economic expansion, fell at a 7.6 percent rate. Business investment, which had already been struggling in part because of the trade war, fell for the fourth straight quarter. Imports and exports both declined sharply as the pandemic brought global trade to a near standstill.

The pandemic has hit the service sector particularly hard: Restaurants are closed, flights are nearly empty, and stadiums have sat unused for weeks. Spending on services fell at a 10.2 percent rate in the first quarter, compared with a 1.3 percent drop in spending on goods.

That pattern could hurt the recovery. Consumers who put off buying goods, especially long-lasting items like cars and washing machines, might simply defer those purchases, not skip them. But they are less likely to make up for spending on services the same way — no matter how many haircuts someone misses in quarantine, it takes only one to get back to normal.

When the new coronavirus began to spread in the United States this year, many economists expected a “V-shaped” recovery, with a sharp downturn followed by an equally swift rebound. But those projections were mostly predicated on a short pause in activity that could be quickly reversed. As lockdowns have stretched into a second month — and with disruptions likely to continue for weeks or months in many states — those hopes have faded.

With each month of unpaid bills and rock-bottom sales, more businesses will go bankrupt or decide not to reopen. More workers will drift away from their employers, turning temporary layoffs into permanent job losses. More loans will lapse into delinquency, endangering banks and the broader financial system.

“The longer things stay shut down, the harder it’s going to be to turn it back on again,” said Tara Sinclair, an economist at George Washington University.

Those consequences have led President Trump and other elected officials — particularly Republican governors in states with relatively few coronavirus cases — to push to reopen the economy as quickly as possible. Several states have started to do so, and others, including large ones like Texas and Florida, will begin to at the end of the month.

But economists and epidemiologists say moving too quickly threatens both public health and economic growth. The United States is not performing nearly as many coronavirus tests as health officials say are necessary to detect and contain new outbreaks. Until that happens, a robust economic rebound won’t be possible, said Karen Dynan, a Harvard economist who was a Treasury official in the Obama administration.

“You could lift the restrictions tomorrow and the economy would still not come back if people don’t feel safe to go out,” she said. As a result, “measures that we normally consider to be public health measures are in this case a really important component of the economic policy response.”

Nader Masadeh, chief executive of Buffalo Wings & Rings, a restaurant chain based in Ohio, remembers when he realized the coronavirus was coming for his business: March 12. That was the day that Gov. Mike DeWine announced a ban on large gatherings in the state, and when the National Collegiate Athletic Association canceled the annual men’s basketball tournament that is Mr. Masadeh’s biggest draw.

“That’s when we realized this is really for real,” he said.

Mr. Masadeh quickly formed two teams. The first focused on ensuring that the business could survive the shutdown by cutting costs wherever possible — renegotiating leases and canceling contracts for linens, window cleaning and music service — and looking for ways to generate revenue through online ordering and curbside pickup.

“The impact of it is way unknown, so cash preservation becomes your No. 1 priority,” Mr. Masadeh said.

The second team focused on reopening: How could the company put diners at ease once restaurants resumed business? Plastic menus are being replaced by disposable paper. Staff members will wear masks and gloves. Tables will be farther apart. Cleaning standards, already high, will be higher.

Mr. Masadeh is eager to reopen. But he is also nervous. He has been able to push off bills during the shutdown, but once it ends, vendors and lenders will expect payments. Rehiring and retraining workers will be expensive. And he doesn’t know how quickly customers will come back.

“The biggest fear that I’m thinking about is that we reopen and the number of infections ramps back up again and they say, ‘Whoa, we made a mistake,’” he said. “We cannot afford a second shutdown. We only have one shot at reopening, and if we miss it or don’t get it right, then the inevitable will happen.”

Concern about the public health situation is complicating the work of economic forecasters and policymakers as well. The usual tools for stimulating consumer spending and business investment don’t help much when businesses can’t operate and consumers can’t leave the house. Standard economic models can’t predict when a vaccine will become available, or when people will feel comfortable going back to work.

“If we could be told right now with confidence that on X date, whenever X date is, the virus will be gone — if we knew that now, I think businesses could plan accordingly and could make the right calculations,” said Ms. Sinclair, the economist. “The problem is that we don’t have that certainty, and there’s no way to have that certainty. There’s no way to promise when we can restart, and that uncertainty is what’s killing our ability to do good economic policy.”

Even businesses that have weathered the crisis in relatively strong shape are struggling with the uncertainty.

Elliott Equipment, an Omaha-based manufacturer of aerial platforms and truck-mounted cranes, is considered an essential business and has kept its production lines running. The company recently moved into a larger facility, making social distancing relatively easy. And its customers — including utilities, telecommunications companies, and state and local governments — are still using its equipment and ordering replacement parts.

But with dealerships shuttered and the offices of potential customers mostly closed to visitors, new orders have pretty much dried up, said Jim Glazer, the company’s chief executive.

“It’s hit a pause button on demand,” he said.

Elliott laid off a few workers early in the crisis, and probably would have cut more jobs had it not received a loan through the Paycheck Protection Program created by Congress as part of its emergency aid package. The company was founded in 1948, and Mr. Glazer said he wasn’t worried about going out of business. But beyond that, he isn’t sure what to expect.

“It’s somewhat hard to plan given that there’s not going to be an on-off switch turned on,” he said. “It may take a period of time — 2022 it may be, even — before we get back to normal.”