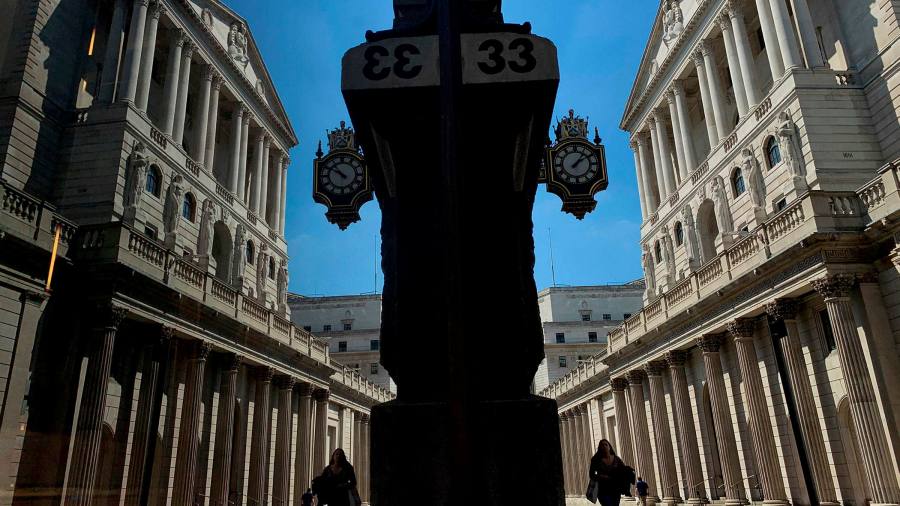 Growing expectations for further rate cuts in the UK sent yields on government bonds below zero on Thursday, with debt prices fired up after Bank of England governor Andrew Bailey indicated that negative rates were “under active review”.

The yield on the five-year gilt fell below zero for the first time, meaning buyers were willing to accept a nominal loss if they held the debt to maturity. Yields sank as far as minus 0.012 per cent, according to Reuters. Two-year yields hit a new intraday low of minus 0.062 per cent.

The rally in bond markets comes a day after the UK sold negative-yielding conventional government bonds for the first time.

The key BoE interest rate stands at 0.1 per cent, the lowest on record. Policymakers have been reluctant to follow peers in Europe and Japan into negative territory but investors are growing increasingly convinced that the scale of the blow to the UK economy from coronavirus could force the BoE’s hand.

Speaking to parliament on Wednesday, Mr Bailey said he had “changed his a position a bit”, and while he did not want to suggest that negative rates were imminent, he did not wish to rule them out either.

Paul Dales, chief UK economist at Capital Economics, said that investors were “pricing in the possibility of negative interest rates. After all the recent chatter and the testimony [on Wednesday] you could even say the BoE is paving the way for it.”

“More and more market participants accept that there is a decent probability that the [BoE] will go negative, too, after years of suggesting that this is not an option,” said Peter Schaffrik, global macro strategist at RBC Capital Markets.

The rally in government debt — seen as a haven asset in times of a crisis — came despite data showing the slowdown in the UK economy was easing.

But Mr Dales said fears surrounding Brexit were likely to intensify next week, which could accelerate the rush into UK debt and push yields further below zero. The EU and the UK are preparing for a fourth round of talks to start on June 1, but negotiations have already stalled and investors are growing concerned the deadlock will persist.

“Negative rates cannot be ruled out any longer,” said analysts at Bank of America. “We think they are more likely in 2021 than 2020, possibly following an economically costly Brexit deal adding to the UK’s economic troubles.”