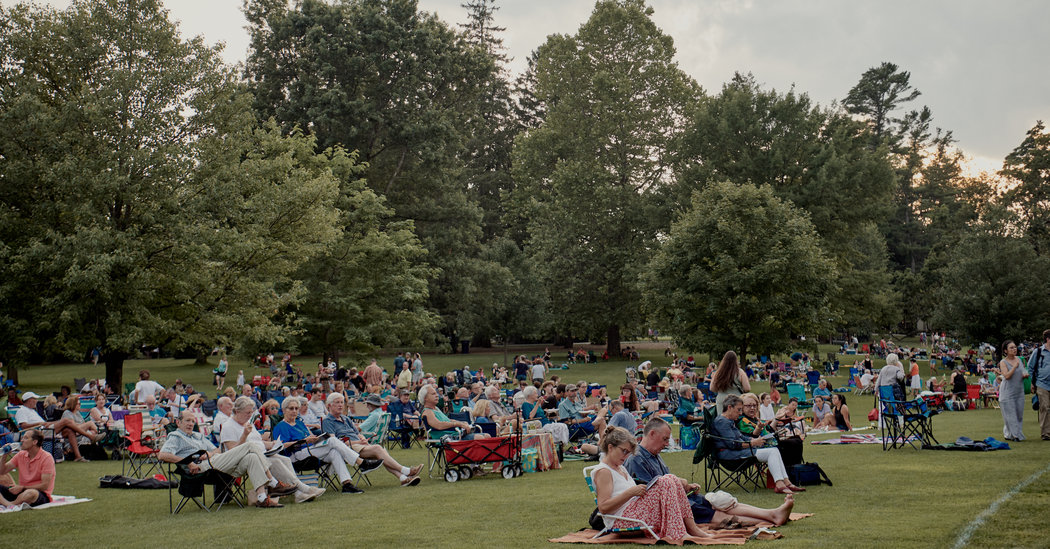 Summer after summer, the Boston Symphony Orchestra retreats to its seasonal home: Tanglewood, a bucolic and beloved outdoor destination for music, tucked away in the Berkshires. New England’s vacationers and classical buffs follow by the hundreds of thousands.

But this year, for the first time since the Second World War, Tanglewood’s season, a staple of summer in the Northeast, has been canceled because of the continued threat of the coronavirus pandemic.

On Wednesday, the Hollywood Bowl, where the Los Angeles Philharmonic has spent its summers for nearly a century, also canceled its season. Together, the closures, announced on both coasts in such close succession, seem to cement a new reality: the end of live performance in America for the summer.

The Boston Symphony’s season at Tanglewood, where it started summering in 1937, is a huge draw for visitors across the Northeast. More than 340,000 people attended events at the festival last summer, The Berkshire Eagle reported, when Tanglewood added lectures and master classes to its slate of programming and opened the Linde Center for Music and Learning.

This season’s lineup included the Tanglewood regulars Yo-Yo Ma and Emanuel Ax, and popular traditions like John Williams’s Film Night and a sold-out James Taylor concert on the Fourth of July. John Legend, Brandi Carlile and Patti LaBelle were also on the schedule.

Mark Volpe, the Boston Symphony’s president and chief executive, said the organization explored various alternatives to canceling the season, at one point sending a drone up above the expansive lawn to think about how social distancing might work. But with the thousands of people who congregate each summer in lines to the bathrooms and walk back to their cars at the end of the evening, he said, it just wasn’t feasible.

The cancellation affects hundreds of the Boston Symphony’s 1,300 employees, Mr. Volpe said in an interview on Friday — particularly the part-time staff who spend the summer parking thousands of cars, cleaning the grounds, selling food and beverages and keeping the festival secure.

“You take Tanglewood out of the Berkshires in the summer, and that basically drives the hospitality industry, which is a big part of their economy,” Mr. Volpe said. “So this has the potential to be devastating to our many partners in the business community in the Berkshires.”

The Tanglewood cancellation accounts for a total loss of $12.4 million in expected ticket revenue for the Boston Symphony. The organization has had secure finances and a robust endowment under the tenure of Mr. Volpe, whose planned retirement in February 2021 will be pushed back until the board is able to find a successor.

The virus had already taken a toll on the Boston Symphony, which in April said it had already lost more than $10 million in revenue after spring performances were canceled, The Boston Globe reported. Boston Symphony musicians took pay cuts averaging 25 percent each, and 400 part-time staff members, along with 70 full-time staff, were furloughed.

Musicians will not face any additional pay cuts — at least through the end of the fiscal year on Aug. 31, Mr. Volpe said. But without Tanglewood, there will be additional furloughs of the full-time staff.

Between the Tanglewood ticket losses, canceled performances from the regular season, lost revenue from the Boston Pops orchestra and tours, and the expected drop in contributions, the Boston Symphony is bracing for a total loss of $29.2 million.

Most other major American classical institutions have already canceled their summers: the Santa Fe Opera, the Ravinia Festival in Chicago, the Glimmerglass Festival in Cooperstown and Lincoln Center’s programming, including the Mostly Mozart Festival and Midsummer Night Swing.

Internationally, some organizations are still weighing their options; the Salzburg Festival in Austria, which this year is slated to celebrate its centennial, has not yet made a decision.

The grounds at Tanglewood will remain open for several hours a week, on Wednesdays and weekends, but visiting will require signing up in advance, the Boston Symphony said on Friday. The festival also plans to film new performances for its website in June and July — some for free, others for purchase — with some of the artists from the 2020 lineup.