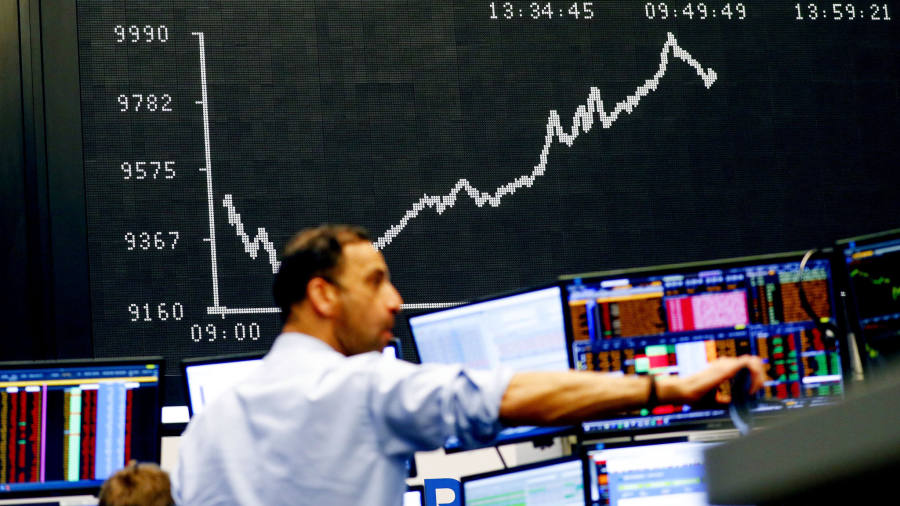 US equities recorded their first back-to-back daily gains in more than a month as US legislators worked to finalise an emergency stimulus bill to provide $2tn in relief to taxpayers and businesses struggling with the effects of coronavirus.

The benchmark S&P 500 index closed up a little over 1.2 per cent on Wednesday, following Wall Street’s best day in more than a decade on Tuesday. Stocks had traded higher earlier, however, before an argument over provisions on unemployment benefit threatened to delay a vote on the deal agreed by party leaders in the early hours of Wednesday morning.

“The fiscal stimulus coupled with the extraordinary moves by the Federal Reserve in recent weeks are showing investors the government is willing to step in to do whatever [it takes] to respond to this economic chasm we are likely to have,” said George Maris, co-head of equities at Janus Henderson Investors — but he added the focus would soon shift to dislocations in the labour market.

Goldman Sachs economists said investors should brace for an “unprecedented surge in lay-offs”, with Thursday’s jobless claims covering the week of March 15-21 set to rise to roughly 2.25m. That would be the largest increase in initial jobless claims and the highest level on record, Goldman said.

Mark McCormick, strategist at TD Securities, said the fiscal stimulus could “cushion the blow to the economy, but we don’t think that it’s all systems go for risk assets. At least, the path ahead will be choppy.”

Risk appetite for corporate credit did seep back on Wednesday. The iShares iBoxx $ High Yield Corporate Bond ETF, better known as HYG, was up about 3.6 per cent on the day, though it is down over 15 per cent so far this year.

Bourses across Europe, meanwhile, advanced after rollercoaster trading earlier in their sessions. The continent-wide Stoxx 600 was up 3.1 per cent, having jumped close to 5 per cent. The index on Tuesday posted its third-best day on record. London’s FTSE 100 was up 4.4 per cent.

“Markets stop panicking when politicians start panicking,” said Andrew Slimmon, senior portfolio manager for Morgan Stanley Investment Management. “It’s a relief rally, but the problem is we haven’t seen companies announce guidance — there will be the drip of continued bad news that will test these levels in the market.”

This week’s equity rebound could be a “sucker rally” in light of the challenges still facing global markets, said Robert Carnell, head of Asia-Pacific research at ING. The rapid increase in coronavirus cases worldwide was “eye-watering”, he said.

The global Covid-19 case count has surpassed 424,000 people, with nearly 19,000 dying from the infection. India late on Tuesday moved to lock down the entire country of 1.4bn people. The situation also continued to worsen in the US, and in New York particularly.

Dealers in Tokyo earlier warned that the two-day jump in Japanese stocks was disconnected from economic fundamentals. “We are seeing markets dominated by fast money. Some long-only clients are coming back to scoop up the names they liked all along, but mostly this is the momentum traders dictating the direction of travel again,” said one broker.

In Tokyo, where some brokers suggested that markets may have hit a floor last week, the Nikkei 225 average rose 8 per cent to reclaim the 19,000 line.

The return to those levels, said traders, would come as a relief to the central bank, which has ploughed more than ¥1tn ($9bn) into the Japanese equity market in March in a bid to support markets.