Foreigners sell record haul of Indian assets due to coronavirus 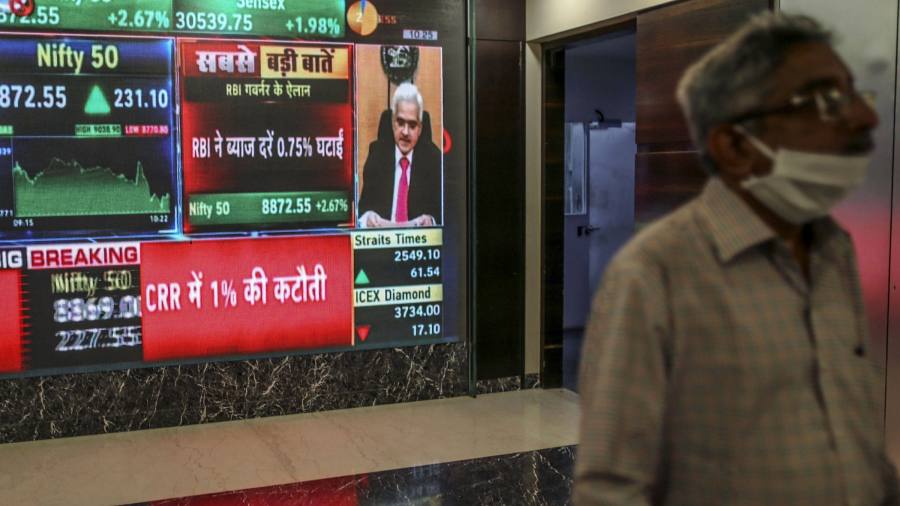 Foreign investors sold a record $16bn of Indian stocks and bonds in March as the economic tumult caused by coronavirus prompted a flight from emerging markets.

The selling by overseas investors came during a dire month for India’s financial markets. The Bombay Stock Exchange’s Sensex index fell 23 per cent in March to its lowest level since 2017, while the rupee dropped to a record low of more than 76 to the dollar.

Foreign investors sold Rs620bn ($8.2bn) of equities in March and Rs603bn in bonds, according to data from India’s securities depositories. The outflows during the month were larger than during the whole of 2008, the year of the global financial crisis. The Sensex fell a further 4 per cent on Wednesday.

Investors sold out of India Inc as part of a broader rout in emerging markets including South Korea and Taiwan. Markets in the US and Europe also tumbled as the coronavirus pandemic spread, shutting down economies across the world.

But concerns in India are deepened by the fact that the country was already suffering its worst economic slowdown in years before the virus hit. GDP growth was expected to fall to a decade low in the year ended March 2020.

After a slow start, the spread of Covid-19 has accelerated in recent weeks, with the number of confirmed infections rising above 1,200 as of Wednesday. Prime Minister Narendra Modi announced a strict 21-day curfew last week, mandating that all but essential businesses close and people stay at home.

About 70 per cent of India’s economic activity could grind to a halt during the lockdown, according to Société Générale. Last week, Moody’s halved its estimate for India’s economic growth in 2020 to 2.5 per cent.

Analysts say that the crisis will have a severe impact on company earnings. Car manufacturers, whose sales were already under pressure, now face the risk of another hit to demand.

The pandemic could also feed through to India’s strained financial system, where banks — already struggling to clean up their loan books — face a sharp rise in defaults. Investors have been on edge after the near-collapse of a large private sector bank in March.

Rusmik Oza, head of fundamental research at brokerage Kotak Securities, said that foreign investors had built up large holdings of Indian assets. That has made India’s financial markets more vulnerable to the kind of global economic shocks that cause big outflows, such as the 2008 financial crisis.

“Their holding is disproportionately higher. That could be a [source of] concern,” he said. “If, globally, things go from bad to worse, even marginal selling could lead to a lot of damage to the Indian markets.”