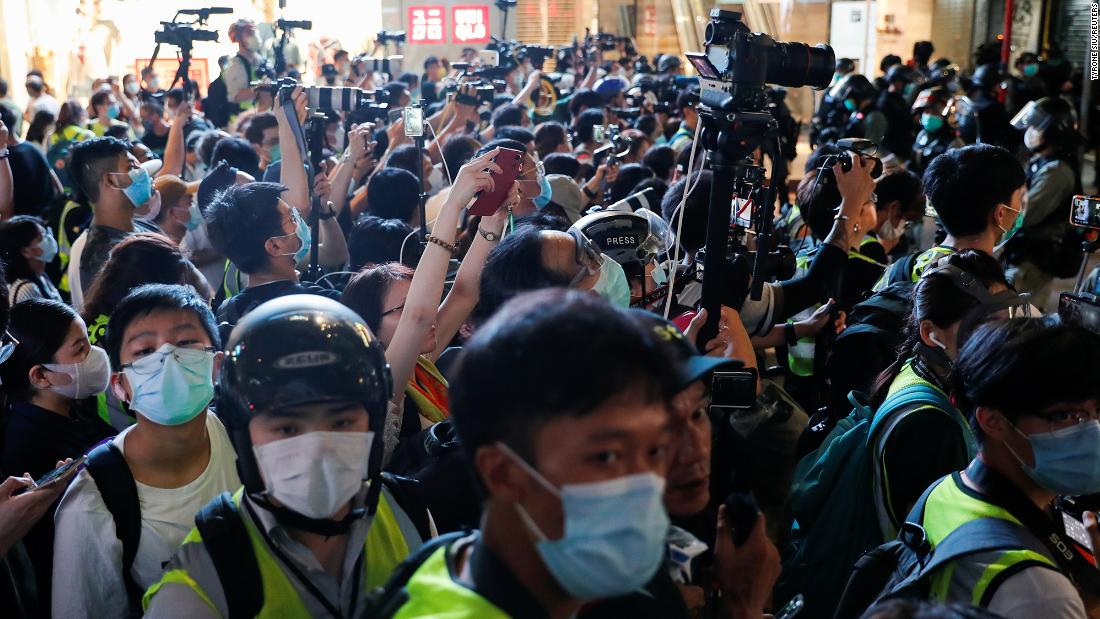 In what was once seen as a safe haven of free speech for local and foreign news organizations operating in the region, journalists and their sources are growing increasingly wary that as China takes a firmer grip on Hong Kong, they could be prosecuted.

The new law applies to any person in Hong Kong, both locals and foreign nationals. It criminalizes actions like calling for Hong Kong independence, or working with a foreign entity “to incite hatred” toward the Chinese government. A new enforcement committee will “strengthen the management” of NGOs and media working in Hong Kong. The police will also have new powers to search premises, wiretap suspects and order people to “delete information or provide assistance.”
Article 4 of the law says “the freedoms of speech, of the press, of publication, of association, of assembly, of procession and of demonstration” will be protected. But it also criminalizes the leaking of “state secrets,” a vague term commonly used in China to cover a range of issues deemed to be in the national interest and which has been used in the past to imprison journalists like Gao Yu on the mainland. That could deter both journalists and sources from reporting or collaborating on stories relating to government affairs.

Hong Kong holds a unique position in the region, as it is home to the only free press in any area or territory administered by the Chinese government. But there’s been no clear guidance on what the new security law means for the city’s long-established media community.

That the legislation lacks specifics is deliberate, not an omission, according to experts such as Sophie Richardson, China Director of Human Rights Watch (HRW).

“This law is so vague and so overboard that it could potentially apply to just about any kind of behavior or speech and that’s exactly the Chinese government’s goal: It wants everyone to start and think ‘Oh wait a minute does this constitute sedition? Oh wait a minute, is that collusion?'” Richardson said.

The vague nature of the law will lead to self-censorship, which may be precisely what Beijing wants, said Steven Butler, Asia director for the Committee To Protect Journalists (CPJ).

“The Chinese Communist Party may achieve what it wants to achieve without ever having to enforce the law,” he said.

Both Butler and Richardson said the new law could bring Hong Kong more in line with how the media is treated in China, one of the worst countries in the world for press freedom according to Reporters Without Borders and where self-censorship is commonplace.

Hong Kong Chief Executive Carrie Lam has asserted that it won’t affect freedom of speech, enshrined in the city’s 1997 de facto constitution called the Basic Law. But the new law may supersede such protections, Butler said.

When asked by CNN in a press conference on Wednesday whether people would be allowed to criticize the new law, Lam said: “If individuals including reporters from CNN are discharging their role and feel something is not right and want to criticize then I don’t see why that would be an offense under this law.”

But, she warned, “If there is more, if you are involved in organizing or colluding that’s another matter. It’s a question of evidence and the law.”

Press freedoms in Hong Kong have been under pressure in recent years, Butler said, adding that reporters covering pro-democracy protests in the city have been targeted by police.

In 2018, the Financial Times’ Asia news editor Victor Mallet was denied a routine extension of his visa, months after he moderated a debate at the Foreign Correspondents’ Club that featured a pro-independence activist.

For journalists who are Hong Kong citizens, the consequences of breaking the new law could be dire. They could be tried behind closed doors and sentenced to life imprisonment. Those found guilty of participating or assisting in crimes can also face between three and 10 years in jail.

Hong Kong authorities have not outlined any specifics on how the new enforcement committee for managing media will affect foreign reporters, who — unlike their counterparts in mainland China — do not require specific journalist visas.

Those visas for foreign reporters in mainland China come with strict oversight and the government has in the past expelled journalists, including around a dozen recently from the New York Times, Wall Street Journal and Washington Post.

Then there are the sources and interview subjects, many of whom are likely to be even more wary of speaking to the media — something reporters in mainland China already struggle with, HRW’s Richardson said.

Butler, at the CPJ, said in recent days that journalists have already been asked by sources and interview subjects to delete previous articles or communications with sources that could be viewed as seditious.

CNN, which has a major bureau in the city, has spoken to sources who have expressed reluctance to participate in interviews. Within hours of the bill’s passage, sources asked that past WhatsApp chats be deleted and expressed caution about being quoted in articles about the law.

Butler and Richardson said it is only a matter of time before there is a “test case,” where a reporter will be tried under the new law.

“I won’t be surprised if some journalists wind up being charged under this law at some point in the not too distant future,” Richardson said.

For now, news organizations and press freedom advocates can only try to lobby the Hong Kong government.

“Hong Kong has been a leader in supporting the rights of a free press in Asia for decades and it is essential that it continues to do so, particularly given the treatment of members of the independent press within mainland China and the global nature of the coronavirus pandemic,” a New York Times spokesperson told CNN Business, adding that it is closely monitoring the situation.

Butler said he hopes Hong Kong’s status as a financial center and an important Asian gateway for Western companies will protect its press freedoms.

“You can’t have an international finance center without freedom of the speech and press,” he said.