Meat Plant Closures Mean Pigs Are Gassed or Shot Instead 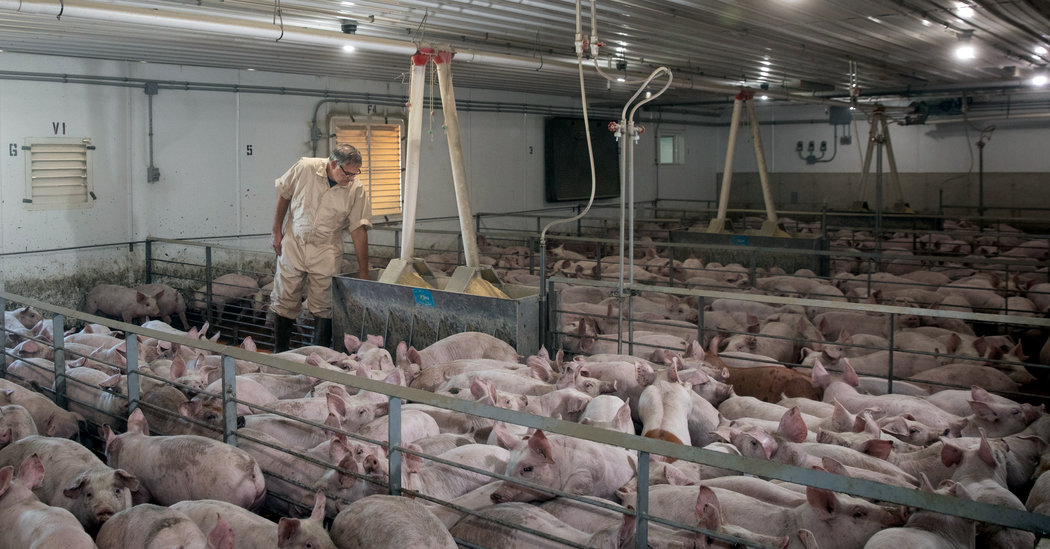 One Minnesota hog farmer sealed the cracks in his barn and piped carbon dioxide through the ventilation system. Another farmer has considered gassing his animals after loading them into a truck. And a third shot his pigs in the head with a gun. It took him all day.

These are dark days on many American pig farms. Coronavirus outbreaks at meatpacking plants across the Midwest have created a backlog of pigs that are ready for slaughter but have nowhere to go. Hundreds of thousands of pigs have grown too large to be slaughtered commercially, forcing farmers to kill them and dispose of their carcasses without processing them into food.

And yet, around the United States, scores of people are struggling to find enough to eat, lining up at food banks after losing their jobs in the economic fallout of the pandemic. Distribution issues have caused grocery stores and fast-food restaurants to run low on meat. Kroger, the largest supermarket chain in the United States, is limiting the amount of ground beef and pork that customers can buy at some stores. Costco has placed a three-product cap on purchases of fresh beef, poultry and pork. Wendy’s has run out of hamburgers at hundreds of locations.

The waste of viable pigs at a time of great need is causing both deep economic loss and emotional anguish across the nation’s pork industry.

“There are farmers who cannot finish their sentences when they talk about what they have to do,” said Greg Boerboom, a second-generation pig farmer in Marshall, Minn., who is trying to find ways to avoid killing a backlog of more than 1,000 pigs.

“This will drive people out of farming. There will be suicides in rural America.”

The number of pigs being slaughtered but not used for food is staggering. In Iowa, the nation’s largest pork-producing state, agricultural officials expect the backlog to reach 600,000 hogs over the next six weeks. In Minnesota, an estimated 90,000 pigs have been killed on farms since the meat plants began closing last month.

The crisis mostly affects farmers with large pork operations who usually send pigs to be slaughtered in giant meatpacking plants run by companies like Tyson and Smithfield.

But the obligation to kill the animals themselves, and then get rid of the carcasses, is wrenching. Last month, Senator Chuck Grassley and other leaders in Iowa asked the White House’s coronavirus task force to provide mental health resources to hog farmers, as well as money to compensate them for the pigs they have had to kill and not turned into meat. On Tuesday, a bipartisan group of 13 senators sent a letter to congressional leaders asking for funding for pig farmers and warning that “failure to have a sensible and orderly process for thinning the herd will lead to animal health issues, environmental issues, and pork producers going out of business.”

The White House has taken some steps to address the problem. Last month, President Trump issued an executive order that gave the Department of Agriculture more authority to keep plants running. And the federal government has announced plans to buy $100 million a month in surplus meat. But even as some meat plants reopen, it most likely won’t be enough or come in time to prevent all of the waste.

“The economic part of it is damaging,” said Steve Meyer, a pork industry analyst. “But the emotional and psychological and spiritual impact of this will have much longer consequences.”

Pigs are not the only casualties. Last month, a farmer in Minnesota watched an egg-processing company gas 61,000 of his birds. The poultry processor Allen Harim Foods sent a letter to farmers in April announcing plans to begin “depopulating flocks in the field.” In all, it killed nearly two million birds on farms in Delaware and Maryland last month.

Like the dumping of fresh milk and destruction of fresh vegetables on farms, the waste of viable livestock shows how finely calibrated and concentrated the American agricultural system has become after decades of consolidation. There are relatively few plants equipped to process most of the nation’s pork, leaving farmers with no real alternatives when the largest facilities close.

Mass-produced pigs live on a tight schedule. They are raised to grow to more than 300 pounds over roughly six months. Pigs that grow too much above that weight make it unsafe for meatpacking workers to hoist the carcasses along the slaughter line.

As they wait for slaughterhouses to reopen, many farmers are looking for ways to slow the growth of their pigs, raising barn temperatures to make them less interested in eating or altering the feed recipe to make it less appetizing.

At his farm in South Dakota, Shane Odegaard sends about 15,000 hogs a year to Smithfield’s meatpacking plant in Sioux Falls, S.D., which accounts for over 90 percent of his revenue. Since the plant closed on April 12, Mr. Odegaard has worked with a nutritionist to devise a new diet plan for his pigs, eliminating protein and fat to curb weight gain. He has also squeezed more pigs into his barns, and the partial reopening of the Sioux Falls facility has helped. But he still has a backlog.

“The question is how long can we hang on to this without being forced to euthanize,” he said.

Many farmers are simply running out of space. Right behind one generation of pigs, another is always being raised. Older, larger pigs have to be sold to the meatpacking plants to make room for younger batches.

One farmer ordered his staff to give injections to pregnant sows that would cause them to abort baby pigs. Others have sold live pigs on Facebook and Craigslist.

Mr. Boerboom, the farmer in Minnesota, said a stranger drove six hours from Wisconsin last week to buy 48 of his pigs to send to local butchers and then donate the pork to a food bank. Deer hunters, who know how to butcher animals, have also bought pigs from him.

But the market for live, 300-pound-plus pigs is limited, making the killings necessary on many farms.

Dean Meyer, a farmer in northwest Iowa, shares a collection of sows with eight other farmers. By the middle of April, he and his partners were running out of space.

On a conference call in mid-April, the farmers reluctantly agreed to begin killing piglets. Since then, managers supervising the sows have killed about 125 baby pigs a week, or 5 percent of newborns.

Mr. Meyer has distanced himself from the process. He said he believed the managers either gassed the piglets or used injections. But he does not want to know how it was done.

“It’s totally against our nature,” Mr. Meyer said. “The natural thing is to keep everything alive, and give the best care we can.”

Ultimately, he said, the dead piglets will be composted in facilities that he and the other farmers have used in the past when piglets died of natural causes. But safely disposing fully grown hogs can be more complicated. The pork industry is trying to make sure waste from the pig carcasses does not leach into rivers or streams.

In April, the meatpacking company JBS converted its shuttered plant in Worthington, Minn., into a euthanasia facility. In recent weeks, animal health officials in Minnesota have leased plots of land as large as 100 acres to create composting sites for hogs. Each day, farmers arrive in trucks to unload the remains of their pigs. Then a cleanup crew puts the carcasses into a wood chipper.

So far, the state has composted more than 5,000 pig carcasses across two locations, and it plans to establish up to three more disposal sites in the coming weeks, said Michael Crusan, a spokesman for the Board of Animal Health. Farmers, who spend about $130 to raise each pig, pay to transport the carcasses to the disposal sites, where the state covers the cost of composting. Some farmers who have had to cull large numbers of animals have lost as much as $390,000 in a single day.

For years, farming groups and state agencies have published guidelines on how to euthanize the animals humanely. But never have so many farmers had to kill so many fully grown hogs so quickly without producing any food.

The Iowa Department of Agriculture has teamed up with the pork producers association and Iowa State University to create a resource center with environmental and veterinary expertise for farmers who have had to kill their animals.

And in Minnesota, pork industry groups have hosted conference calls for farmers on how to carry out the process humanely.

Mr. Boerboom attended one of the presentations and listened to a farmer talk about the emotional strain of killing about 3,000 pigs in a single day.

After the call, Mr. Boerboom learned that the farmer had used a gun. “It was an all-day process,” he said.

Mr. Boerboom, whose father founded their pig farm in 1936, has shot injured pigs to spare their suffering. But he couldn’t stomach shooting so many.

If ever he has to do it, he alone — not his three children or employees on the farm — would put the pigs down, Mr. Boerboom said. But this week he’s feeling more optimistic that he can avoid culling as the meat plants ramp back up.

“Every animal has a purpose,” he said. “Every being has a purpose. We have raised these pigs to go into the food supply. And now so many are being wasted.”