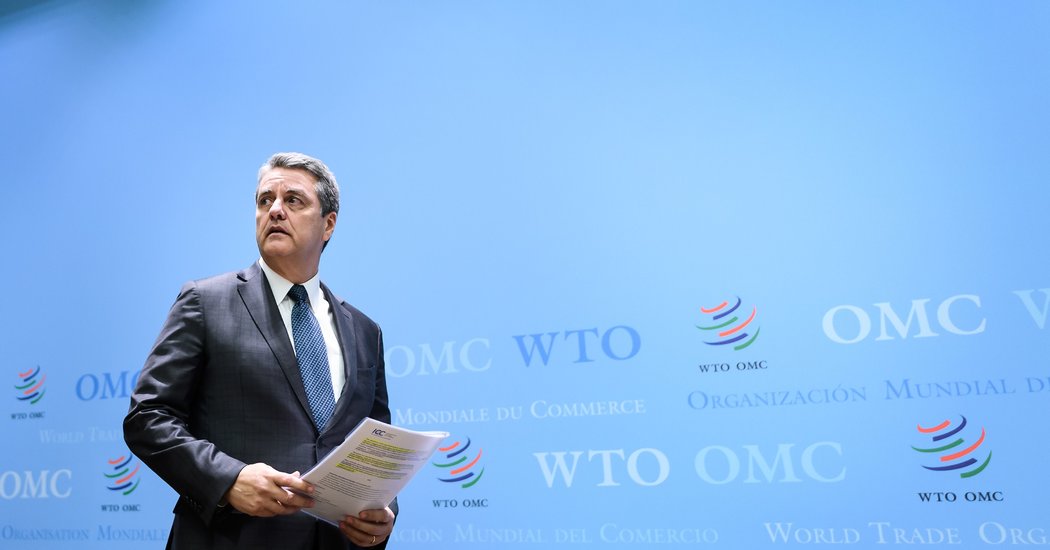 FRANKFURT — The head of the organization charged with bringing a semblance of order to international trade relations resigned unexpectedly Thursday, adding another element of uncertainty to commerce in the midst of the coronavirus pandemic and escalating trade conflicts.

Roberto Azevêdo, a career Brazilian diplomat, resigned as the director-general of the World Trade Organization effective Aug. 31, the Geneva-based organization said. His second four-year term was not scheduled to end until September 2021.

The W.T.O.’s operations have been crippled since late last year as a result of actions by the Trump administration, which has refused to approve nominees to fill vacancies on a crucial appeals panel that rules on trade disputes.

With Mr. Azevêdo’s departure, which caught officials in Geneva and Brussels by surprise, the organization will lose an advocate of open trade and international cooperation whose views clashed with President Trump’s preference for bilateral power politics.

Mr. Azevêdo, 62, did not link his departure to tensions with the Trump administration. Rather, he said he wanted to give W.T.O. members a head start on choosing a successor, which is often a difficult process.

The coronavirus pandemic has brought complex negotiations on issues such as fishing subsidies to a standstill and made it unlikely that agreements will be reached before next year. A debate at the same time about the next W.T.O. director would interfere with attempts to overcome trade disputes, Mr. Azevêdo said.

“The selection process would be a distraction from — or worse, a disruption to — our desired outcomes,” he said during an online meeting with W.T.O. members. “We would be spending valuable time on a politically charged process that has proved divisive in the past.”

World trade was already declining because of Mr. Trump’s trade wars with Europe and China, and has plunged further since the pandemic brought economic activity in many countries to a standstill. The W.T.O. has predicted that global trade could fall by one-third, a decline not seen since the Great Depression in the 1930s.

Recently Mr. Azevêdo has expressed frustration that the United States, Europe, China and other large countries were not coordinating their response to the coronavirus emergency. On the contrary, Mr. Trump has recently stepped up his rhetoric against China.

Mr. Azevêdo argued that international cooperation during the financial crisis and recession of 2008 helped the world economy recover more quickly.

“Either we shape up and begin to talk to each other and find common solutions or we are going to pay a heavy price,” Mr. Azevêdo told CNN in April.

Mr. Azevêdo, who was previously a top trade negotiator for Brazil and has worked in Geneva since 1997, also cited personal reasons for his departure. The W.T.O. makes decisions by consensus, which means even one of the organization’s 164 members can stymie progress. The director-general must find a way to thread conflicting national interests and reach accord, a laborious and exhausting task.

“Between the lockdown and my recent knee surgery,” Mr. Azevêdo said Thursday, “I have had more time than usual for reflection.”